Possibility of floods have been ruled out; more rainfall predicted as cylone moves towards Chhatisgarh 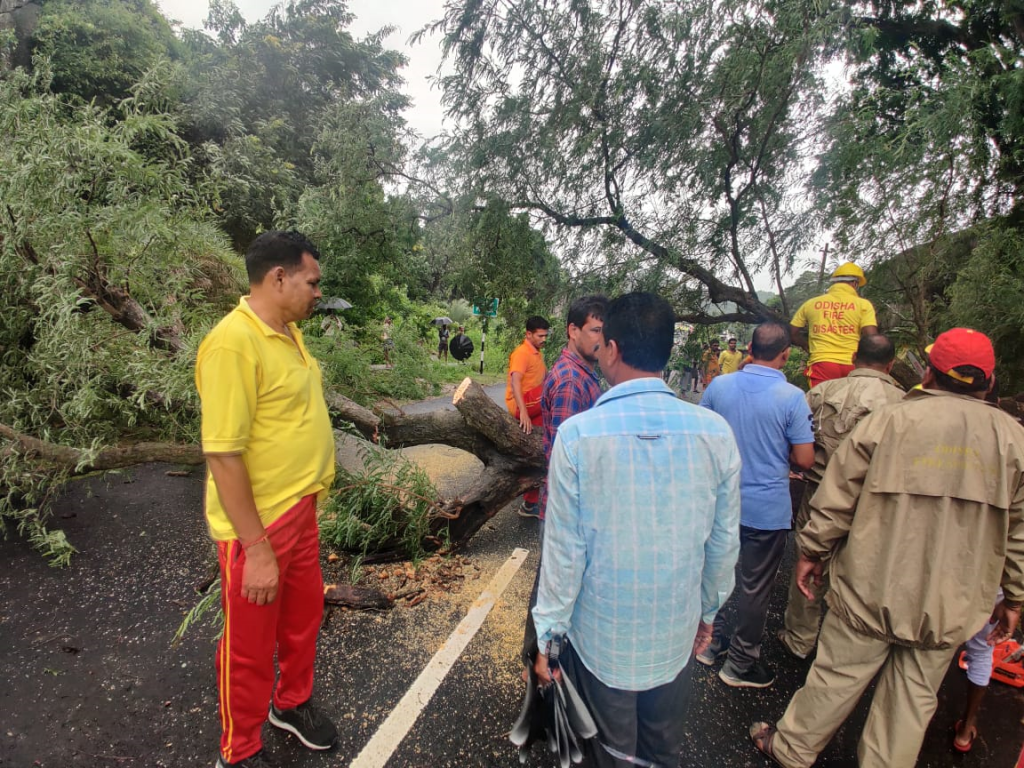 Cyclone Gulab caused excess rainfall, landslides and swamped low-lying areas in Odisha since the evening of September 26, 2021, when it made landfall in Srikakulam district in the neighbouring state of Andhra Pradesh.

The eastern state recorded 15.8 millimetres rainfall in the past 24 hours, according to India Meteorological Department, Bhubaneshwar.

The actual rainfall in Odisha till September 27 was 70 per cent higher than its September average. The state recorded 360.1 mm rainfall this month, as against its normal of 212 mm.

The cyclone-induced showers caused landslides and uprooted trees in Gajapati and Koraput districts. Mohana-Paralakhemundi road and Ajayagada-Labanyagada road in Gajapati district  on National Highway 326(A) were blocked.

NH 26 between Pottangi and Salur was also closed due to a landslide at Ralegada village in Koraput district, causing traffic snarls on both sides of the highway.

Fire personnel and national disaster response force were deployed to clear the roads, said Gajapati collector Lingaraj Panda. “We expect communication to be restored by evening.”

Gajapati district was identified as one of the landslide-prone districts in the state. During severe cyclone Titli in October 2018, around 20 villages were wiped out in landslides that claimed at least 48 lives and rendered around 9,100 families homeless.

Fearing landslides, Ganjam district administration halted communication on the NH 59 from Surada to Daringbadi in Kandhamal district at Gajalabadi, according to sources.

Traffic movement between Lamptaput road in Koraput district and Visakhapatnam in Andhra Pradesh was also halted due to tree felling, sources said.

The state continues to receive rainfall as the cyclone proceeds westward towards Chattisgarh, where it is predicted to weaken into a depression, the met department shared.

The continued rain will not cause floods, said Pradeep Jena, special relief commissioner of the state. “Major rivers in southern Odisha districts are flowing below red marks, ruling out the possibility of floods,” said an engineer in the water resources development department.

The state’s mission of ‘zero loss of life’ was fulfilled, Jena said, adding:

“Around  46,075 people were evacuated and moved to 1,189 shelters. Of them, 1,533 pregnant women were shifted to health centres or hospitals. One has delivered a healthy child in Ganjam.

As many as 24 of the total 314 blocks, including Khaira in Balasore, Muribahal in Bolangir, Harabhanga in Boudh, R Udayagiri in Gajapati, Binika in Subarnapur and Kutra in Sundargarh, however, recorded deficient rainfall, according to Amresh Khuntia, professor of climate change in Odisha University of Agriculture and Technology in Bhubaneswar.

Heavy rainfall during short durations led to the excess rainfall in the state, he added.

“Excess rainfall in the month of September was caused by the three depressions over Bay of Bengal this year, including cyclone Gulab,” said Uma Shankar Das, scientist in the regional meteorological center, Bhubaneswar.

Weather scientists have predicted more rainfall in southern districts of Odisha and northern Andhra Pradesh in the next 24 hours.

A low-pressure system may also emerge in northeast Arabian Sea and adjoining GUjarat coast on September 30 evening and intensify in the subsequent 24 hours, said HR Biswas, director of IMD Bhubaneswar.