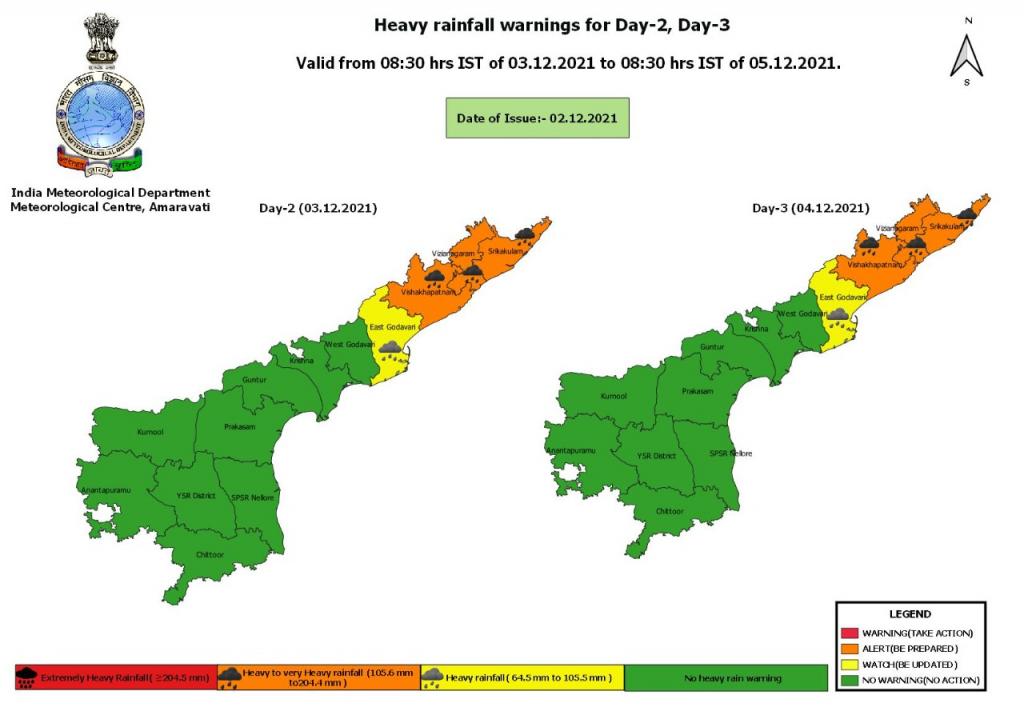 The India Metrological Department (IMD) has forecast heavy to very heavy rains in most places of north coastal Andhra Pradesh on December 3 and 4, 2021, particularly in Srikakulam, Vizianagaram and Visakhapatnam districts. Heavy rains are likely to occur at one or two places in East Godavari district as well, it said.

A low-pressure area over central parts of Andaman Sea moved west-northwest and became a well-marked low pressure area over southeast Bay of Bengal and adjoining Andaman sea is in the early morning (at around 5.30 am Indian Standard Time) of December 2, 2021.

Squally winds speed reaching 45-55 kilometres per hour gusting to 65 kmph is likely to commence along and off North Andhra Pradesh-Odisha coasts from the midnight of December 3 and increase gradually to 70-80 kmph gusting to 90 kmph from the morning of December 4 for 12 hours.

Condition in the sea will be rough to very rough over along and off North Andhra Pradesh-Odisha coast from the midnight of December 3 and become high to very high from the afternoon of December 4 for subsequent 12 hours.

If will be very rough to high along and off West Bengal coast from the morning of December 4 and high to very high from the same evening for 12 subsequent hours.

Fishermen at sea have been advised to return to coast with immediate effect.

It has further advised off-shore and alongshore operations to be judiciously regulated on December 3 and suspended on December 4, 2021 to ensure safety of life and property along north Andhra, Odisha and West Bengal coasts.

Farmers have been advised to harvest ripen crops like paddy and horticultural crops and ensure the harvested crops are secured from damage due to rain and strong winds.