Dams were built to control floods; they are now triggers

This may sound ironic: a semi-arid, drought-prone district of Karnataka lost 71 human lives this year due to floods. Belagavi, geographically a dry district, received 652 per cent above normal rainfall between August 1 and 7 this year, the maximum in the state. Karnataka itself received 128 per cent more than normal rainfall during this time.

By August 5, all the dams in the district were brimming. Yet, operators at the Hidkal dam were releasing only 68.8 cubic metres per second (cumecs) to the Ghataprabha river. As rains intensified on August 6, the dam started bulging, so the operators suddenly started releasing 833.3 cumecs water. On August 9, it was increased to a whopping 2,858 cumecs. At this point, the reservoir was releasing more water than it was getting.

A brimming dam usually brings cheer to farmers who start planting paddy as they get ample water for their fields through canals. But the sudden gush of water, coinciding with excessive rainfall, drowned the unprepared district. Belagavi was the worst hit.

At least 11 houses collapsed and more than 5,000 were partially damaged in its 331 affected villages. About 51,000 people had to be evacuated. The situation was no different across the state.

More than 40,000 houses in Karnataka got damaged and about 0.3 million people had to be evacuated from the low-lying areas. The Chief Minister’s Office informed that 136 important roads were damaged due to floods and landslides.

A similar story was playing out during this time in Maharashtra. With the onset of monsoon, three big dams in the upper Krishna basin — Koyana, Warna and Radhanagari — had water exceeding the dams’ storage capacity.

As per the India Meteorological Department (IMD), Satara, Sangli and Kolhapur districts, where these dams are located, witnessed 400 per cent above normal rainfall between August 1 and 8. However, it was distributed over eight days, and that too preceded by an IMD warning. Clearly, better management of water release from dams would have averted the floods that ensued.

THERE IS NO coordination between officials at the reservoir and those in the basin area, says Shripad Dharmadhikary of Manthan Adhyayan Kendra, a non-profit in Madhya Pradesh. “Also, the operators don’t work with the IMD officials to understand rainfall patterns. Fearing little rains, they only focus on stocking water,” he adds.

To recommend better weather monitoring measures and to set up an improved dam management mechanism, the Maharashtra government has decided to form a 10-member panel.

An assessment of the floods in Karnataka and Maharashtra this year by the South Asia Network on Dams, Rivers and People (SANDRP) shows that had the dams started releasing water from July 25—leaving 40-45 per cent of the dam empty—excessive rains would not have wreaked havoc. So, why do operators not release the water early?

A dam is absolutely dry by the end of summer. So they start filling it up as soon as monsoon sets in. “This is why a situation arrives when water must be released suddenly in large quantities when another round of intense rainfall comes,” says Dharmadhikary.

It’s not that there are no rules to manage dam water. The Rule Curve, practised internationally, is a dam operating schedule. It regulates when and how a dam should be filled and emptied, and ensures that the dam is full to its capacity only towards the end of monsoon. This provides the dam a cushion during times of excessive rainfall, thus curbing the chances of floods in downstream areas. Dam operators in India almost never follow this. Result: most of the recent floods in the country have occurred due to sudden release of dam water. 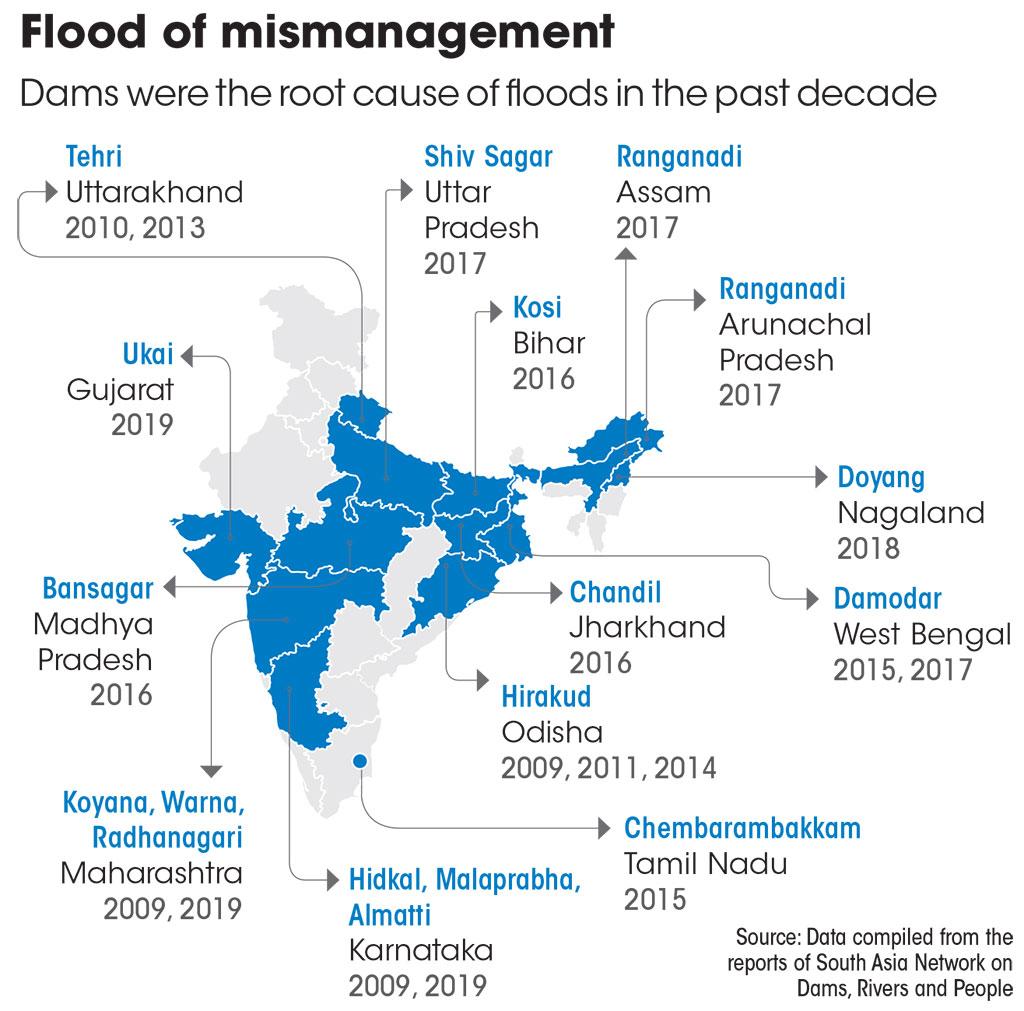 THE CRUX OF the problem is that the Rule Curve was prepared in the 1950s based on the rainfall patterns then. Over the years, rainfall became erratic, leaving the dam operators in the lurch. “We need to review the rule keeping climate change in mind. It must be made more dynamic and flexible,” says K J Joy, senior fellow at the Pune-based Society for Promoting Participative Ecosystem Management.

He adds that new dam projects must take climate change into account while designing them. “It is important that the possible inflow and outflow of water is assessed. Maximum rainfall must be estimated while planning the project. A thorough analysis is important because this is where the problem germinates,” he says.

For effective dam management, from August this year, IMD Pune, has started issuing forecast on the expected volume of water in 101 river basins. “IMD hopes this will help operators know what to expect in the days to come,” says Pulak Guhathakurta, scientist at the institute.

A SANDRP report says there is no information on how the Central Water Commission (CWC), state water resources departments or the dam managers will use the information.

DAMS ARE JUST an outdated and counter-productive way to manage floods, thinks Joy. They induce a false sense of security. Instead, they leave behind a long trail of destruction. In Punjab, the Amarinder Singh government has announced to canalise all its rivers for a permanent solution to floods.

“It’s an engineering mindset. Rivers are not canals, they need space. River Satluj is flooding because the Bhakra dam is mismanaged. For the government, a river is just a water carrier. It is, in fact, an ecosystem. Constraining its channel will increase the intensity of floods. This is what happened with the Kosi river in Bihar,” says Manoj Mishra of Yamuna Jiye Abhiyan.

Risks arise because dams are getting old and dilapidated. Cases like the Tiware dam breach in Maharashtra’s Ratnagiri district are frequent now. It killed 19 people on July 2, this year.

The country has 5,745 dams, of which 293 are more than 100 years old, said Jal Shakti Minister Gajendra Singh Shekhawat during the Lok Sabha debate. The age of 25 per cent of the dams is between 50 and 100 years.

By 2025, the situation will turn alarming, as by this time, 301 dams would be 75 years old. As many as 496 large dams would be above 50 years, states an Economic and Political Weekly (EPW) article in this year’s June edition.

Dams in India are designed to last 100 years. As per the EPW article, all large storage structures become weak with time. This is because construction materials such as concrete and steel deteriorate due to abrasions caused by waves, silt, sand and gravel. Dams also lose strength due to thermal expansion and cavitation, it states.

But officials at CWC maintain that age has nothing to do with dam’s safety, as many old dams are performing satisfactorily.

An analysis of dam failures till 2010 by the Jal Shakti Ministry’s Dam Rehabilitation and Improvement Project shows that in 44.44 per cent cases, failures have occurred in the first five years of construction. Failures in dams between 50 and 100 years were 16.67 per cent, and in over 100 years old it was 5.56 per cent.

According to CWC, each dam must have its own operation manual before it is constructed. Gulshan Raj, chief engineer, dam safety, at CWC, is pinning his hopes on the Dam Safety Bill, 2019, that was passed in the Lok Sabha on August 2 this year, but could not be passed in the Rajya Sabha. The bill provides for the surveillance, inspection, operation and maintenance of dams. It will penalise owners if the dams are poorly managed.

This is crucial considering there is no accountability of officials in-charge of maintaining reservoirs in case of dam failure or dam-induced floods. The bill also provides for a National Committee on Dam Safety and National Dam Safety Authority. Though these two agencies exist under CWC, they can only advise—they have no legal powers to ensure adherence.

The drawback of the bill is that it neither talks about dam management nor about flood control. But Raj is hopeful. “Dam operations, a part of the bill, will ensure that the Rule Curve is followed.”

(This article was first published in Down To Earth's print edition dated September 16-30, 2019)