Tremendous strain is building up due to plate convergence under Bangladesh, says a new paper. A single big rupture could cause a magnitude 9 quake 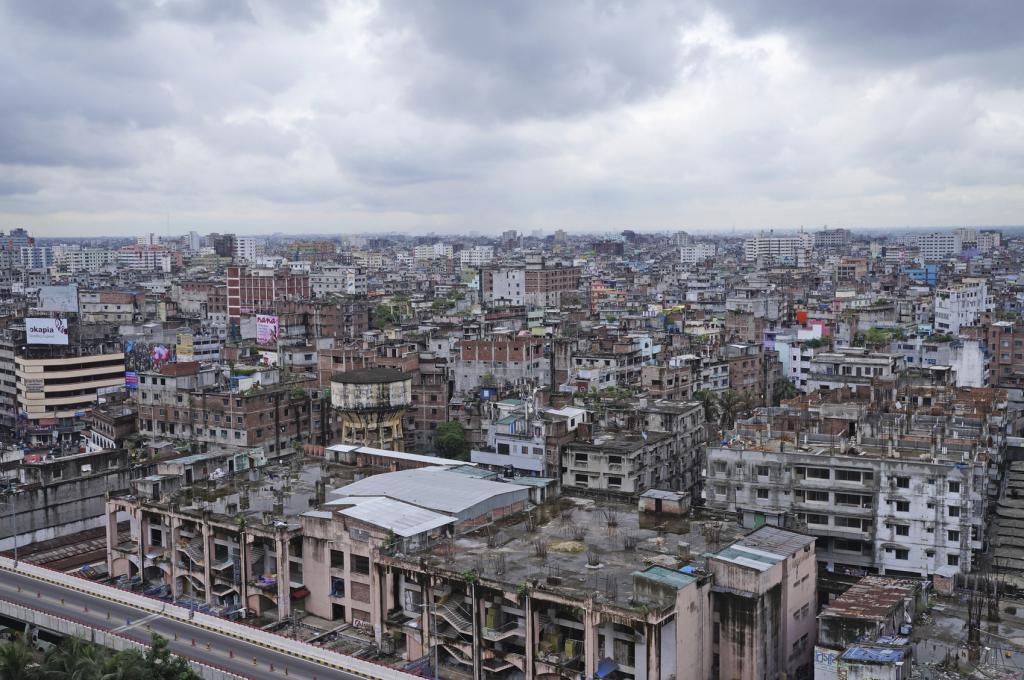 A 9 magnitude earthquake would cause widespread damage in a densely populated city such as Dhaka (Photo credit: iStock)

A new paper published in journal Nature Geoscience has warned of a potentially devastating earthquake ripping through the densely populated Bangladesh as well as hill towns of northeast India.

The paper has analysed GPS measurements to prove that the Indian tectonic plate is thrusting under the Eurasian plate even under Bangladesh, causing stress to build up along the convergence for at least the last 400 years. If this stress were to rupture in a single event, it could cause an earthquake of 8.2 to 9 magnitude on the Richter scale.

The Indian tectonic plate has been colliding with Eurasia for millions of years, forming the Himalayas and Tibet. The boundary of this plate extends eastwards into Assam and continues into Myanmar and further into the Indian Ocean. For many years, experts have argued over whether the Indian plate is sliding under the Eurasian plate under Bangladesh and Myanmar in a phenomenon called subduction, or the two plates are simply sliding past each other.

“Our new GPS data show that while most of the motion is sideways, there is still convergence between the two regions that is accumulating strain on the subduction zone, which we conclude is still active,” says Michael S Steckler, research professor at Lamont-Doherty Earth Observatory of Columbia University, New York, and corresponding author of the paper.

The team installed continuous GPS receivers between 2003 and 2014 in the delta region of Bangladesh. Observations from these receivers were analysed along with those from India and Myanmar.

The findings revealed that eastern India is moving diagonally towards Myanmar at 46 mm per year. While most of the strain of this movement is absorbed by surrounding faults, 17 mm of the movement is bringing Bangladesh and Myanmar closer, causing the landscape to appear like “a carpet being shoved against a wall”. Researchers say this proves that subduction is taking place below and the whole zone includes Dhaka, the densely populated capital of Bangladesh.

If the strain, which has been building up for at least 400 years, is released in a single event, the zone would jump horizontally by about 5.5 m or even more. “This means that the land over the megathrust will move westward by that distance and Aizawl and Dhaka will be that much closer together. The land will also rise and sink in different places by a metre or two, which can affect the courses of the rivers. The resultant earthquake may cause widespread destruction in Dhaka and Bangladesh,” says Steckler.

What makes the situation worse is the kilometres of sediment deposited by the Ganga and Brahmaputra rivers in the delta region. The paper cites recent research which says that subduction zones with large thicknesses of sediments have the largest earthquakes. The sediments also amplify seismic waves and generate stronger shaking, in a process called soil liquefaction, sucking in structures built over them.

Calling this potential earthquake an “underappreciated hazard”, Steckler says it is not possible to predict when it could strike, whether soon or in 500 years. Hence, he calls for constructing a modern Probabilistic Seismic Hazard Map for Bangladesh and designing appropriate building codes. “What is needed are good building codes that are followed by the people and enforced by the government. If poor construction, seen at the Rana Plaza building, can lead to a collapse with no earthquake, then what would be the result of a major earthquake?” he adds.

The paper also warns of widespread land sliding and collapse of the populated regions in northeast India, such as Aizawl in Mizoram.