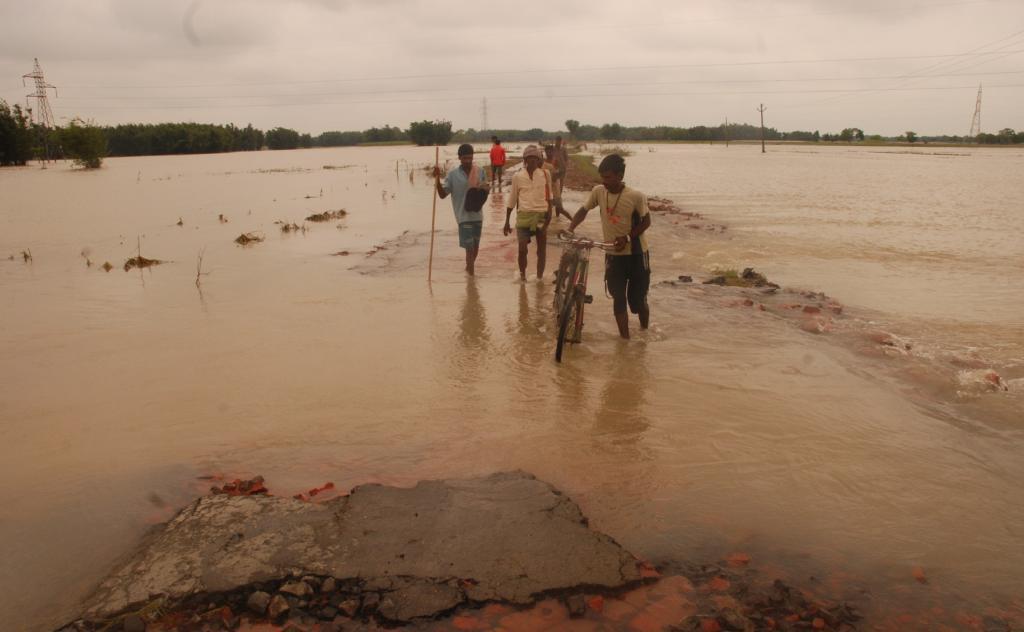 Thousands of farmers who cultivate sugarcane, paddy and vegetables in Bihar’s East Champaran, West Champaran and Muzaffarpur districts have been affected by the spate of floods in the last two months.

Large tracts of standing crops in villages across the Gandak basin have been destroyed in the successive deluges over 50 days since mid-June. The floods arrived unexpectedly early, right with the onset of Monsoon, the farmers said, displacing thousands.

“I lost all sugarcane and paddy crops on my two-and-a-half acres field,” said Subhash Sahni from Dumaria village in East Champaran, one of the worst-affected districts. Sahni had invested the entire profits from selling Rabi crops (harvested in April-May) into cultivating the destroyed crops.

“I will have to struggle to feed my family with no hope of harvest,” he shared.

Bihar is not new to floods. They, however, usually hit the villages a month or so later than it did this year.

Heavy rainfall in the state is normal during July and August. But the eastern state received surplus rainfall in June, just as the Monsoon arrived. This resulted in floods in the low-lying areas.

In June 2021, Bihar received 354.3 millimetres (mm) of rainfall — 111 per cent more than normal for the month. This excess rainfall drove the total precipitation through July 31 to 613.1 mm for the two months — about 19 per cent higher that the normal rainfall for the period.

Early flooding occurred for the second year in a row. The swollen Gandak river inundated and destroyed acres after acres of crops in 2020 as well.

“Like last year, our standing sugarcane crops have drowned under the flood water,” rued Promod Mishra, a sugarcane farmer from Izra village.

Growing vegetables on a large scale is a major source of livelihood for hundreds of farmers in the flood-ravaged villages, said Mahesh Paswan from the same village. He added:

Vegetables growing over hundreds of acres of land have perished. With flood water receding, paddy and sugarcane have survived in some areas. But white sand has spread all across those fertile fields. That is another big challenge.

Bhindi (okra), baigan (aubergine), karela (bitter gourd), kaddu (pumpkin) are some of the varieties that were ruined by the floods in large quantities.

Even before the floods hit, waterlogging due to the early surplus rainfall damaged paddy seedlings at many places and standing maize crops in several others.

In nearly a dozen districts, large tracts of land are still submerged and there is little chance of the flood water receding in the coming days. The situation could worsen with more rain predicted in August by the India Meteorological Department.

The overflowing river also washed away entire stretches of lands belonging to the farmers. Rameshwar Bind from Piprasi block, West Champaran lost two acres of land on which he had grown sugarcane and paddy. “I have left with no land now,” he said, adding that hundreds more like him have met with the same fate.

All major rivers, including the Bagmati, Koshi, Kamla Balan, Lakhadei and Bhuthi Balan, are in spate due to heavy rains, the villagers noted.

So far, the government has not shown any concern for the lost crops and not announced compensation because assessment of damage is yet to be done, he added.

The government agencies are yet to release data related to the number of villages and people affected and displaced by floods.

Bihar is India’s most flood-affected state and accounts for close to 17.2 per cent of the total flood-prone area in the country, according to the latest update on the state's water resources department website.

“In Bihar’s capital Patna, the power centre of the state, there is no concern for the farmers affected by floods,” said Ranjeev, a flood expert. Disastrous floods are caused by wrong policies of the government, including construction of embankments and creating hurdles for free flow of swollen rivers, he added.

And yet, there is no daily flood bulletin on the website of the disaster management department. The only official daily updates are for the rising water levels in rivers and rainfall forecast, but nothing about the situation on ground or the condition of the victims.