Expect Assam floods to worsen in the next few days 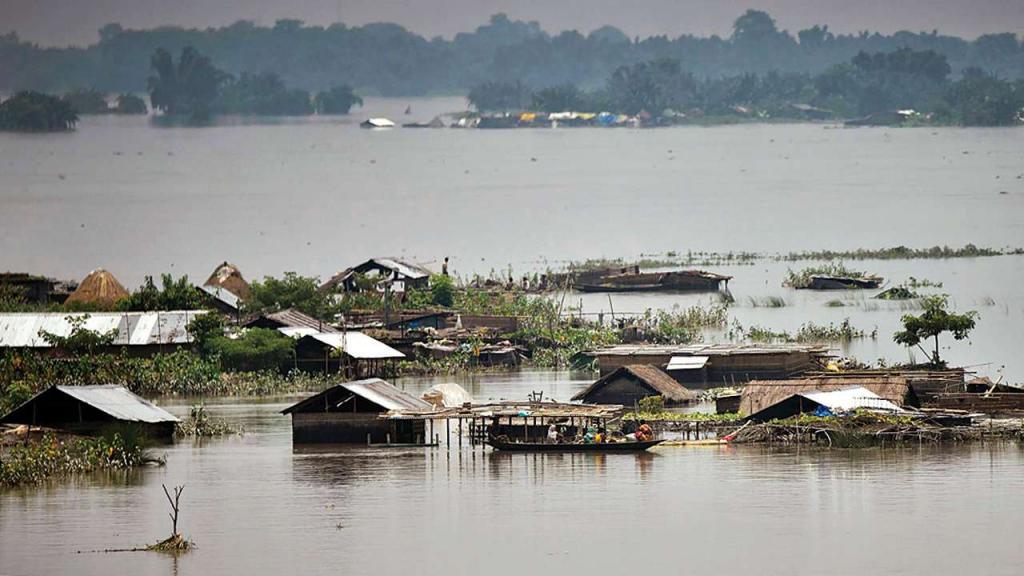 The India Meteorological Department (IMD) has issued red alerts for five states in the east and North East: There may be heavy-very heavy rainfall in most places and extremely heavy rain in isolated places in Assam and Meghalaya as well as Sikkim and northern parts of West Bengal on July 19-21, 2020 and in Arunachal Pradesh on July 19-20.

This may worsen the already extreme floods in Assam while Meghalaya, Arunachal Pradesh, Sikkim and north Bengal may face fresh floods. A spell of intense rainfall will affect the northern and the northeastern regions of India from July 18-21.

The IMD has warned that prevailing weather conditions “may accentuate existing flood conditions and also lead to landslides in some areas of northeastern states and sub-Himalayan West Bengal and Sikkim.”

Press Release on 'Intense rainfall spell over Northern and Northeastern parts of India during 18th-21st July, 2020.'

The intense spell over NE India may accentuate existing flood conditions and also lead to landslides in some areas of NE states and Sub-Himalayan WB & Sikkim. pic.twitter.com/IzhXhDWgWS

The monsoon trough, around which most of India’s rainfall occurs, will most likely shift towards the north from July 18, IMD said. When the monsoon trough is in its southern position, central, western, and southern India get most of the rainfall. Along with this flow of the moisture carrying south-westerly winds from the Bay of Bengal towards the northeastern states will also intensify the rains, said IMD.

Some Aerial view of the situation in Assam #AssamFloods pic.twitter.com/mPEkcTdUDw

All 27 districts of the state were affected, as of July 17; at least 71 people have died, according to media reports. More than 3.5 million people across 3,014 villages have been affected, according to the Assam Disaster Management Authority.

Crop area of 128,000 hectares has been destroyed by the floods and over 3.1 million big and small animals have been impacted, endangering livelihoods of people at a time when there is also an increase in the novel coronavirus disease (COVID-19). The pandemic situation complicates the troubles therefore distancing and hygiene regulations become increasingly difficult to follow.

Infrastructure has been severely affected, with damages to roads, houses, electricity poles not completely accounted for.

A less-talked about aspect is the impact on biodiversity, with the loss of trees and animals as well as the degradation of the environment. The current floods have killed 86 wild animals in the Kaziranga National Park. They have also caused massive soil erosion in many places across the state, which is detrimental for the growth of plants and trees leading to an increase in the number of floods.

Until June 22, Assam received 309 millimetre of absolute rainfall — a per cent more than the long-term normal for that time of the year. In the next two days, however, there was 34 mm absolute rainfall, taking the excess rainfall to 2 per cent.

On June 25, in the first wave of intense rains, it received 51.5 mm rainfall in a single day — 29 times the normal for that day. That took the seasonal absolute rainfall to 395 mm — an excess of 13 per cent.

The intense rainfall was the beginning of the second wave of floods in Assam which have deteriorated ever since. As of July 17, the state has received 810 mm absolute rainfall which is 19 per cent more than the normal for this time of the year.

Meghalaya and Sikkim have also received more than normal rainfall to date with an excess of 38 per cent and 97 per cent. On the other hand, some of the other northeastern states have fared the worst in the season till now. Manipur has a rainfall deficit of 43 per cent and Mizoram 37 per cent.