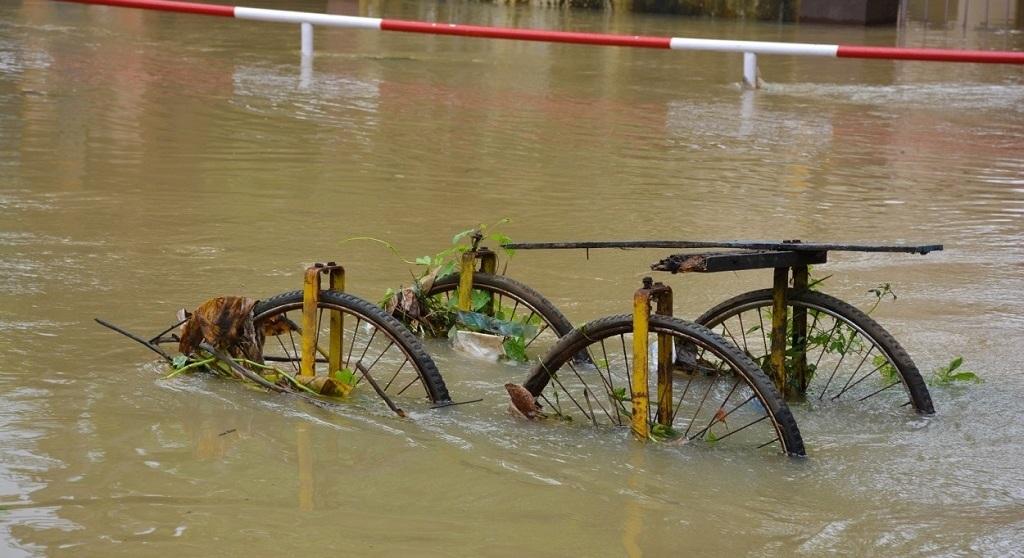 While Kerala has been the worst hit, Uttar Pradesh, West Bengal, Maharashtra and Karnataka have also suffered heavy casualties during the season. Credit: Rejimon Kuttappan

Monsoon, which is supposed to be a season of prosperity, has devastated the country this time. It has been three months since the monsoon set foot in India. In these three months, 1,310 people died due to floods in nine Indian states and 7.5 million were affected across the country, says the National Disaster Management Authority. Another 200 were killed by flash floods and landslides in Himalayan states, about which the NDMA has published no information so far.

In Kerala alone, back-to-back spells of abnormally intense rainfall over 10 days earlier this month submerged the coastal state and killed 443 people. The number is likely to increase in the coming days. Although the 2018 monsoon will be remembered for the devastation of the Kerala floods and the incessant rains that caused it, the situation is not much better in the rest of the country.

While Kerala has been the worst hit, Uttar Pradesh, West Bengal, Maharashtra and Karnataka have also suffered heavy casualties during the season. See this map: 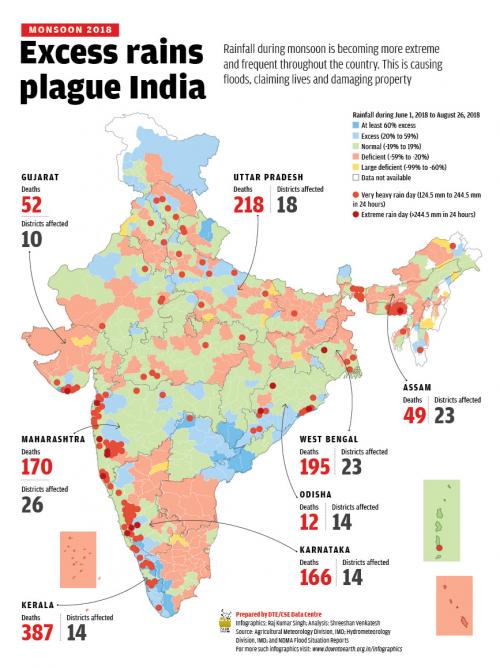 The NDMA estimates that on an average, 1,600 people die because floods in the country every year and with a quarter of the conventional monsoon remaining, it is likely that this figure will be surpassed this year.

Not a wet and active monsoon

According to the India Meteorological Department (IMD), rainfall over the country during the last three months has been six per cent shy of the long term average of the season. The perceived normalcy and the devastation of floods give the false impression of a wet and active monsoon season. In fact, despite the large-scale damage and loss of life, even floods have occurred in far fewer states than in the recent past.

Take the situation in Uttar Pradesh for example. According to the state government, a total of 2,92,000 people were affected over two spells of flooding during the monsoons- indicating extremely concentrated areas affected by heavy rainfall and flooding. Over 200 people have died in three spells of flooding in different parts of the state, yet around half of the state is facing a drought including several districts neghbouring those affected by floods. A similar situation is seen in Assam, Bihar, West Bengal, Gujarat and Karnataka, where substantial portions of the state are dealing with deficit rainfall.

The distribution and incidence of extreme rain events during the season can be read as a clear marker of climate change. Over the past three months, there have been over 150 incidences of more than 125mm of rain falling at one go. This remarkably high number is in keeping with recent trends, but the distribution is skewed more than usual.

Typically, the west coast receives a significant number of extreme rain events. This year though, the concentration of these events in the region is much higher. One reason for this is the atypical distribution of the monsoon this year. While the west coast has received abundant rains, monsoon winds have not penetrated the mainland. According to a senior scientist at the IMD, this is because of poor northward propagation of the winds. “The Madden Julian Oscillation (MJO), which is an intra-seasonal atmospheric oscillation near the equator, affects the movement of the monsoon winds. This year, it has not established a favourable phase for northward propagation. Additionally, we have not had active troughs that direct the winds in the season,” he explains.

While it is fairly common for the MJO to be unfavourable for the monsoon, what is less common is what is happening in the Bay of Bengal. The strength and location of monsoon winds also depends on low pressure systems that develop in the Bay of Bengal. Low pressure systems that evolve into depressions are effective in strengthening and directing monsoonal winds over the sub-continent. The climatological average indicates the development of six well-marked depressions during the four monsoon months—one each in June and September and two in July and August. However, this year, the first depression was formed only in the end of July. With only a little more than a month left, only three depressions have formed so far in the BoB and moved into the Indian mainland. The reduced number of depressions has suppressed distribution of rainfall in the subcontinent and has contributed to the concentration of rainfall over four prolonged spells primarily in the west coast since the onset of monsoon.

An eerie and erratic monsoon

Whatever be the reasons, distribution of monsoon has once again been erratic and dysfunctional. Nearly half of the country’s 36 meteorological subdivisions are currently faced with deficits of over 10 per cent. In terms of monsoon performance, most of these regions are faced with a lose-lose scenario irrespective of the remainder of the season. September is typically considered to be the tail-end of the monsoon, as it accounts for less than a fifth of the rainfall. While it is possible that the statistical deficit is made up with a wet September, this would most likely require more extreme rain events that imply further damage. In fact, heavy rains in September would make matters worse for farmers who in several regions are already facing heavy losses due to monsoon’s stuttering start. Alternatively, if September were to be typically drier than July and August, it would almost certainly indicate a drought-like situation in half the country.

Climate scientists often throw up predictions of standard indicators like temperature and precipitation in a warmer world in an attempt to learn thresholds and points of no return. But these far-removed projections do not begin to describe the multitude of chain reactions that climate change is unleashing.

India's recent experiences with the monsoon are a clear example of what it is like to be already firmly embedded in the climate curve. Over the past two decades the monsoon has been throwing confounding signals at researchers. These signals do not neatly fit into a trend. There is a virtual consensus on the fact that monsoon has been changing but practically none on how or to what extent. The lack of a trend in the change in monsoons uncovers an inconvenient problem—how can one adapt to something if one can't know what it will look like tomorrow? This inconvenient question is likely to gain prominence over this and several years to come.