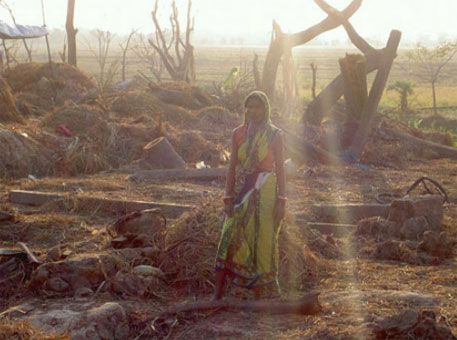 In the run up to the third global conference on disaster risk reduction this week, a UN body has released an estimate of how much governments need to set aside to make up for losses caused by natural disasters. The UN Office for Disaster Risk Reduction (UNISDR), in a report, has said as much as US $314 billion will have to be spent every year to meet annual average losses from just earthquakes, tsunamis, tropical cyclones and river flooding.

The report serves as an alarm for nations as they convene for the third UN World Conference on Disaster Risk Reduction, beginning March 14, at Sendai city in Japan.

With over 8,000 expected delegates, this event will see the launch of a new global Framework for Disaster Risk Reduction that will replace the 10-year Hyogo Framework for Action adopted at a 2005 UN conference in Kobe. At Sendai, countries are expected to announce their commitments on reducing the impact of disasters, which have claimed over 1.3 million lives and cost the global economy at least $2 trillion in the past 20 years.

The report is well-timed and provides a big message—it is high-time the world focuses on managing risks than just managing the number of disasters.
The report, Making Development Sustainable: The Future of Disaster Risk Management, provides a sober review of the 10 years which have passed since the last world conference on disaster risk reduction at Kobe in Japan when nations adopted the Hyogo Framework for Action, the global guide for disaster risk management.

According to the report estimates, an investment of US $6 billion annually in disaster risk management would result in avoided losses of US $360 billion over the next 15 years (till 2030). It states that this US $6 billion is just 0.1 per cent of total forecast expenditure of US $6 trillion annually on new infrastructure.

Margareta Wahlström, head of UNISDR, said: “The 2015 Global Assessment Report demonstrates clearly that many countries face significant challenges because of their inability to manage the fiscal burden created by large-scale disaster events. She said “700,000 people have died in disaster events over the last ten years. A total of 1.7 billion people have had their lives disrupted in some way. It is of great concern that economic losses in major reported disaster events come to $1.4 trillion.” 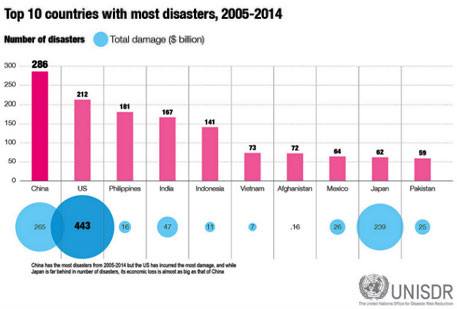 Relating the loss of human life years to the global disasters (that were reported), the report reveals that between 1980 and 2012, more than 1.3 billion life years were lost worldwide in internationally reported disasters, making for an annual average of 42 million life years. It is almost equivalent to loss of life years due to TB or malaria. Over 90 per cent of the total life years lost in disasters are spread across low and middle-income countries. The risk is unevenly spread and concentrated in low-income households within the countries.

Disaster risk is, therefore, a challenge that is unevenly spread, says the report and asks developing nations to increase capital investment and social expenditure substantially if they are to achieve the Sustainable Development Goals post-2015. 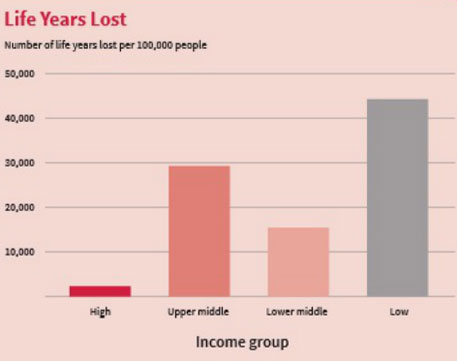 India’s GDP most at risk due to floods

The UNISDR report has also pointed to a new analysis of NGO World Resources Institute (WRI), which shows that flood risks affect the “lower and middle-income countries” the most. WRI warns that that the developing world is expected to see more GDP exposed to flood risks in 2030, driven largely by socio-economic change. The socio-economic development is expected to concentrate more people, buildings, infrastructure and other assets in vulnerable regions and such regions are more prone to risks. Top 15 countries in this ranking account for nearly 80 per cent of the total population affected every year and all of these nations fall in the category of least developed or developing.

Three South Asian nations—India, Bangladesh and Pakistan—are most at risk from river floods, with an increasing number of people threatened because of extensive urbanisation and the climate challenges in low-lying regions,  says the study. India, with 4.84 million people at risk due to floods, has by far the most GDP exposed to risks, at $14.3 billion. 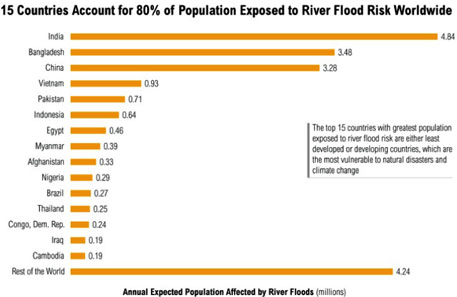 Wise investment decisions and planning are undoubtedly critical since the world will need to spend $57 trillion to $67 trillion till 2030 for infrastructure development, as per McKinsey estimates. But the investment decisions rarely take hazard exposure into account, or otherwise they excessively discount disaster risk due to the potential for short-term returns. As competition increases, large flows of profit-centric investment may continue to flow into the developing world, the hazard-exposed areas, leading to further increase in intensive risks.

With foreign investment continuing to flow into countries highly exposed to natural hazards, those which are unable to demonstrate robust resilience may lose an element of their competitiveness, warns the 5th annual Natural Hazards Risk Atlas too, released by Verisk Maplecroft last week. According to the report, more than 50 per cent of cities in the world which are most at risk of natural disasters are located in just four countries—the Philippines, China, Japan and Bangladesh—and three out of these are developing.

As the nations gather to decide the post-2015 framework—for  disaster risk reduction at Sendai, Sustainable Development Goals at New York  and Climate Change at Paris (COP 21),  the UNISDR and WRI analyses have definitely contributed to drawing up the future of disaster risk management. So, there is need to focus on the underlying causes and the drivers of disaster risk—poverty, climate change, poor urban planning, land use, and lack of building codes. And there is a need to re-interpret disaster risk.

Investing in disaster risk reduction makes a good business sense and demands serious, collaborative action and commitment from government and the private sector.

Interactive: Floods- nature’s fury from around the world.

Disasters in Asia and the Pacific: 2014 year in review