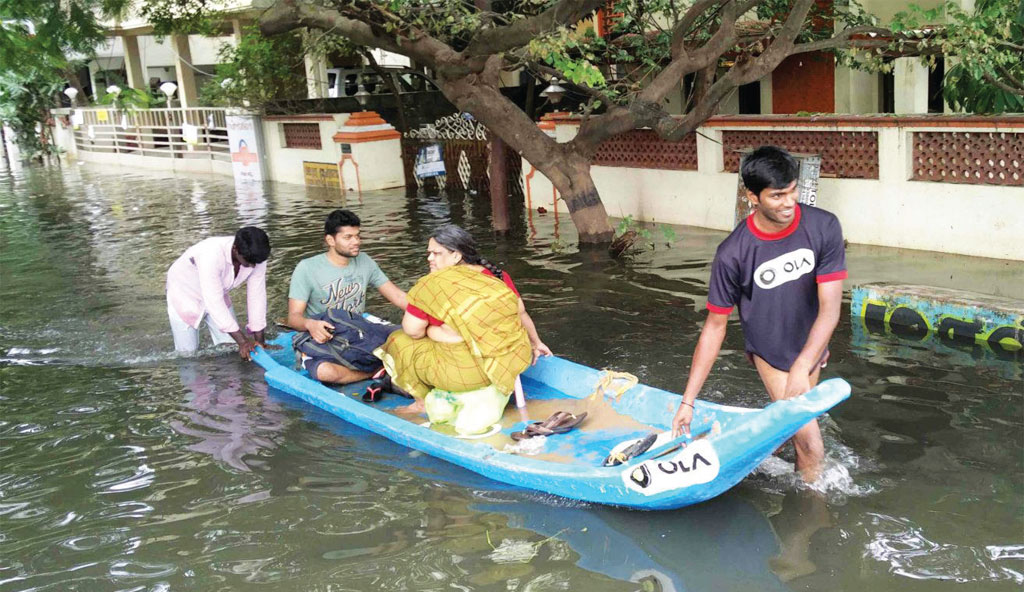 The high-intensity rainfall that Chennai received in November brought it to a standstill. Between November 11 and 18, the capital of Tamil Nadu received 449.9 mm of rain—a 329 per cent rise against the normal rainfall of 104.9 mm, says the Chennai division of the India Meteorological Department.

The rainfall the country receives this time of the year is caused by the north-east monsoon. But its intensity this year was much more due to the presence of two separate and well-marked cyclonic depressions, which caused the heavy spells of rain between November 9 and 14 and between November 15 and 17. By the time the state government brought the flood-like situation under control, 79 people had died in the state. Unofficial estimates, however, put the number close to 200.

Though the government repeatedly pointed out that the situation was unprecedented, the downpour exposed the state’s inability to handle heavy rainfall. This should not have been the case because Chennai has been a pioneer of sorts among Indian cities as far as rainwater management is concerned. Having faced the severe drought of 1999-2000, the state government made rainwater harvesting (RWH) mandatory in all buildings in 2003. The Chennai Metropolitan Water Supply and Sewerage Board (CMWSSB) took a number of steps to popularise RWH at the household as well as the community levels. Stormwater drains were provided with percolation pits to recharge underground aquifers with the runoff. Efforts were made to keep the waterbodies in the city healthy to soak up the rainwater and recharge groundwater.

There are natural canals and drains that directly connect the city with wetlands, waterbodies and rivers such as the Cooum and the Adyar that run through Chennai. The Cooum is supposed to collect surplus water from 75 tanks in its catchment area within the Chennai Metropoliton Area, while the Adyar is supposed to carry the surplus water of about 450 tanks in its catchment area and also from the Chembarambakkam tank which is not in its catchment. It was estimated that the city would harvest almost 129 million cubic metres of rain and recharge through different methods. Physiographically, Chennai is flat and needs a very good drainage system. A combination of natural and artificial drainage is the only way to protect Chennai from drought as well as floods. However, it seems that the government’s efforts made have not been effective. 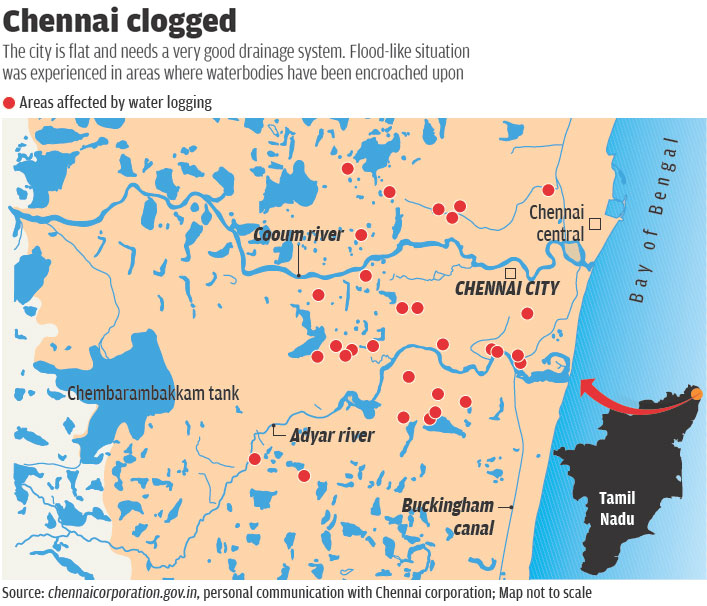 According to the Centre for Environmental and Water Resources Engineering, Chennai had more than 600 waterbodies in the 1980s but a master plan published in 2008 said that only a fraction of the lakes could be found in healthy condition. According to records of the state’s Water Resources Department, the area of 19 major lakes has shrunk from a total of 1,130 hectares (ha) in the 1980s to nearly 645 ha in early 2000s, reducing their storage capacity, explains architect K Lavanya of Crescent School of Architecture, B S Abdur Rahman University, Chennai. Anil Kumar Gupta of the National Institute of Disaster Management (NIDM), New Delhi, says that there are over 30,000 slums on the banks of waterbodies in these areas. The drains that carry surplus water from tanks to other wetlands are also encroached upon. A joint research paper by the department of physical geography, University of Freiburg, Germany, and Care Earth, India, shows that the Pallikaranai marsh, which is the major flood sink in the city, has been totally killed by buildings and roads that pass over it.

The human-made stormwater drains constructed to drain the flood water are clogged and require immediate desiltation. The recharge pits constructed by CMWSSB along the drains also require maintenance and repair at some places. According to a 2011 study by NIDM, Chennai has only 855 km of stormwater drains against 2,847 km of urban roads. Thus even a marginally heavy rainfall causes havoc in the city. Moreover, the population of the city has grown eight times in the last century, according to NIDM. This has increased the runoff which the city is unable to dispose of in the absence of an adequate drainage system.

The loss of waterbodies, drainage systems and green areas show that the city has never given a serious thought to flood management. But the state government has spent huge amounts to clean up the rivers and rework its sewage infrastructure. A government-funded flood alleviation scheme was launched in 1998, at a cost of Rs 300 crore, focused mainly on structural measures. Cleaning of certain waterways and lakes was also undertaken under the scheme. The Chennai City River Conservation Project was launched in 2000 to improve the waterways, with an estimated outlay of Rs 1,700 crore. In 2009, the Union government allocated around Rs 633 crore under the Jawaharlal Nehru National Urban Renewal Mission for Chennai to get its drains in shape. By 2014, about Rs 394 crore were spent by Tamil Nadu. In 2014, the Comptroller and Auditor General of India noted that the state has not done enough to protect Chennai from floods and the plans made for flood control were flawed.

Concerned citizens groups have moved the courts several times to save the wetlands. For example, in September 2015, the Madras High Court ordered all authorities concerned to remove encroachments from the marsh of the Pallikaranai lake. Laws, such as the Tamil Nadu Protection of Tanks and Eviction of Encroachment Act, 2007, have not been able to save the wetlands in the city, say experts. Even the court orders are waiting to be implemented.

Lavanya says that the city needs an integrated approach to flood control and management. This can be done under a nodal agency that can plan, coordinate and monitor authorities like the Chennai Corporation, the Slum Clearance Board and CMWSSB. L Elango, head of the geology department, Anna University, Chennai, says that the mapping of the flood-prone areas has already been done, but it is not clear why the state government has not initiated action on this.

Apart from these steps, the management of untreated sewage and solid waste should be done on a war footing to avoid choking of the drains, says Lavanya. Strong regulations to save the urban waterbodies should be implemented to stop encroachment of the wetlands and water channels. The existing rules and regulations are just not strong enough to protect the urban lakes, says Delhi-based advocate Sanjay Upadhyay.