The district received unprecedented rain last year, followed by landslides in nearly 40 villages; nine months later, lives of the affected families continue to be in disarray 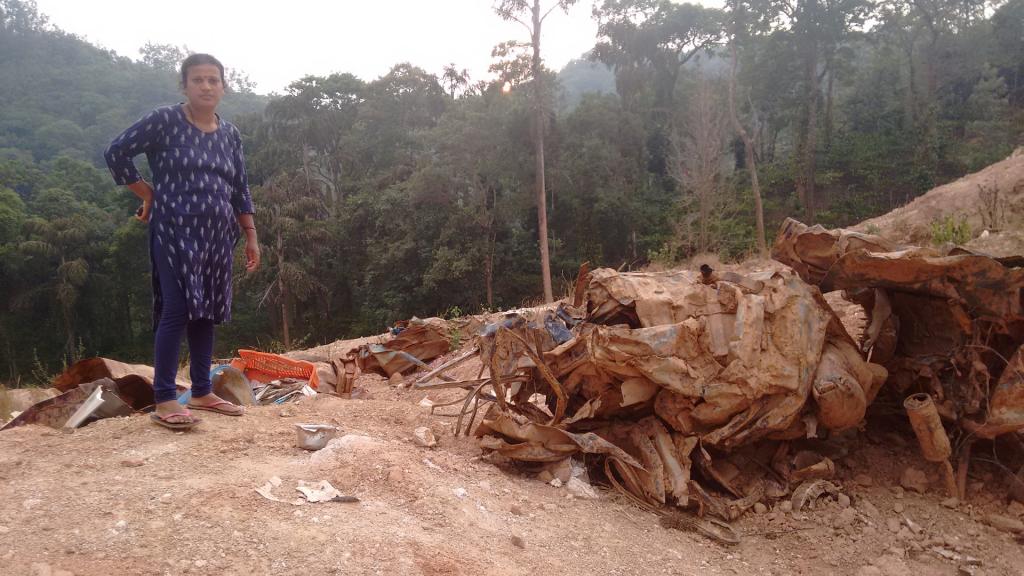 Meenakshi still shudders when she thinks of the fateful night in August 2018. “When I recall that night, fear grips me even now. Even the elder people say that they have never seen such rainfall in their lifetime; they say they have not even heard of such a thing,” she says.

Meenakshi and her husband Sundar belong to Masthota near Kaloor village in Kodagu district, Karnataka. They lost their home and belongings in the landslides that hit the district last year.

Last year, Kodagu district, also known as Coorg, received unprecedented rain, followed by landslides in nearly 40 villages across six Gram Panchayats. This hilly district on the Western Ghats has picturesque coffee and spices plantations. In the 40 villages that bore the brunt of the landslides, many families’ lands and houses have been wholly or partly destroyed.

Besides destroying forest lands, the landslides also destroyed roads, power and communication infrastructure in these villages. As per reports of Myrada Kaveri Pradeshika Samsthe (MYKAPS), a Mysore-based non-profit, there were 20 fatalities.

Around 2,568 houses were fully, severely or partially destroyed; while 6,996 persons were housed in 51 relief centres. Many more still moved to the houses of friends, relatives or to rented accommodation. Further, 805 kilometre of highway roads and 1,792 km of village roads were damaged.

As entire hillsides came crashing down, many people, including Meenakshi and Sundar, fled their homes with only clothes on their backs. They made their way to relief centres set up by government and civil society organisations.

In certain villages, mandatory evacuation orders were ordered. Disaster management teams from the state and central governments, besides local volunteers, were involved in the evacuation and rescue operations.

An overwhelming amount of relief materials that flooded these centres, including food, clothes, footwear and even books and uniforms for children. Staff of government departments and civil society organisations as well as individuals worked tirelessly to ensure the smooth conduct of these relief camps.

Those who were involved in the relief operations feel that the quality of rescue operations minimised the loss of human lives compared to the scale of the disaster.

However, nine months after the disaster, lives of the affected families continue to be in disarray. Coffee, pepper and cardamom are the mainstay of most agricultural families in this district.

After the disaster, many of these families lost means of their livelihood: several pieces of lands have been completely wiped out. For such families, a return to agriculture seems nearly impossible. There are others whose lands are filled with six-eight feet of debris and soil.

The trees, that provided shade needed for coffee plants, have been uprooted. Streams and water sources have been filled up with silt. In several spots the landslides wiped out natural springs too. Once the relief camps closed, people whose houses were destroyed or severely damaged, moved to rented houses in nearby towns or villages.

Some families moved in with relatives or friends. The children too have been moved to schools in the village or town to where the family has shifted. Many of these families continue to live away from their villages because their houses are not inhabitable or because the land on which these houses stand continues to be unstable.

Second Monnangeri, a hamlet under Galibeedu Panchayat of Madikeri district was one of the worst affected. Dhananjaya, a panchayat member from this village, said that all the 193 families living in there suffered severe losses.

Though the administration has taken up rehabilitation and compensation measures, this has not been done methodically and in consultation with the people, claimed Dhananjaya.

For instance, the government has sanctioned new houses for 25 families. These are in a village 7 km away from Second Monnangeri, on lands which are deemed safe for habitation. These families have their lands in this village, some of which can be reclaimed. These families have to now figure out how they will manage their farmsteads.

Further, 25 families have been allocated Rs 10,000 per month as rental allowance till such time as the monsoon in 2019 subsides. However, almost the entire village has relocated and there seems to be no basis for allocation to only 25 families.

The Star of Mysore newspaper reports that the Geological Survey of India (GSI) carried out a scientific assessment in Kodagu immediately after the landslides. However, locals are not aware on what basis certain lands have been declared unsafe and why certain others have been declared safe (where the government has provided alternate housing).

Meenakshi and Sundar are employees of a Bangalore-based plantation owner. They lived on their employer’s 10 acre organic farm looking after the coffee, turmeric and paddy crops. The property housed a home-stay, which the couple looked after. Also on the farm was a turbine generating hydro-electricity from a small stream.

The landslide destroyed everything on the 10 acre farm, including their house, the homestay, the cattle shed, three cows and the turbine. All trees on the land have been uprooted and the stream flowing across the land silted up.

Around 10 families in the area lost their houses and have been allocated houses in another village. But their employer has not received any information on whether his name is on the list of those who have been provided alternate housing by the government.

Sundar, Meenakshi and their two teenage children moved to a friend’s outhouse in Madikeri and continue to live there. Fortunately for them, their employer wishes to reclaim the land and reemploy them.

Three out of 10 acres are still fit for some sort of cultivation and the couple has planted turmeric on this land. They have started the slow and painful process of reclaiming whatever is possible of the rest of the land.

Sundar estimates that it will take at least 20 years to re-establish the plantation and restore it to its original state. “Farm boundaries have to be resurveyed, streams have changed course. It cannot be done till after the next rains because we are not sure what will happen in the next rain. This season we will only grow only a little turmeric and not do anything else,” he said.

Saleela Patkar, a coffee and pepper grower from Madikeri, was one of the first persons to volunteer for relief activities in the immediate aftermath of the disaster. She now coordinates the disaster rehabilitation project of MYKAPS.

The organisation’s focus is on supporting disaster-affected children with educational materials; it also runs two tailoring training units for women victims of the disaster. Patkar said that people are at a loss for ideas on how to reclaim the land.

Most people went back to replanting pepper and coffee, which might not be the best options on lands that have been ravaged — coffee takes at least 8 years to start yielding and people now need short-term crops. Besides it will not grow well on soils exposed to too much sunlight.

The farmers do not have information on what the alternate options are. Patkar said there hasn’t been a scientific and methodical assessment either of the damage nor the options for rehabilitation and land reclamation.

She said that government departments such as those of agriculture, horticulture and the Coffee Board could have used this as an opportunity to assess how to rehabilitate affected persons and provide compensation.

“It was just 40 villages that were affected. They could have looked at it as a pilot intervention where existing funds could have been repurposed for a specific project looking at land rehabilitation, compensation for people who lost land at a large scale, how to introduce new crops, insurance, new tools, new watershed treatment plans — where you look at slope stabilisation and not just soil and water conservation,” added Patkar.

Dhananjay, too, rues the lack of rigour and scientific planning on the part of the government. He acknowledges that certain activities such as restoration of electricity lines and telephone towers were done swiftly. However, surveys to assess compensation needs and rehabilitation of livelihoods cannot be done in an ad-hoc manner.

In spite of the challenges, many families continue to live on the land and hope to somehow reclaim their lives. When asked if they have considered the option of moving away from Kodagu, Sundar said, “This is our own village, we have been workers for generations, my father also worked in this area, where else will we go?”