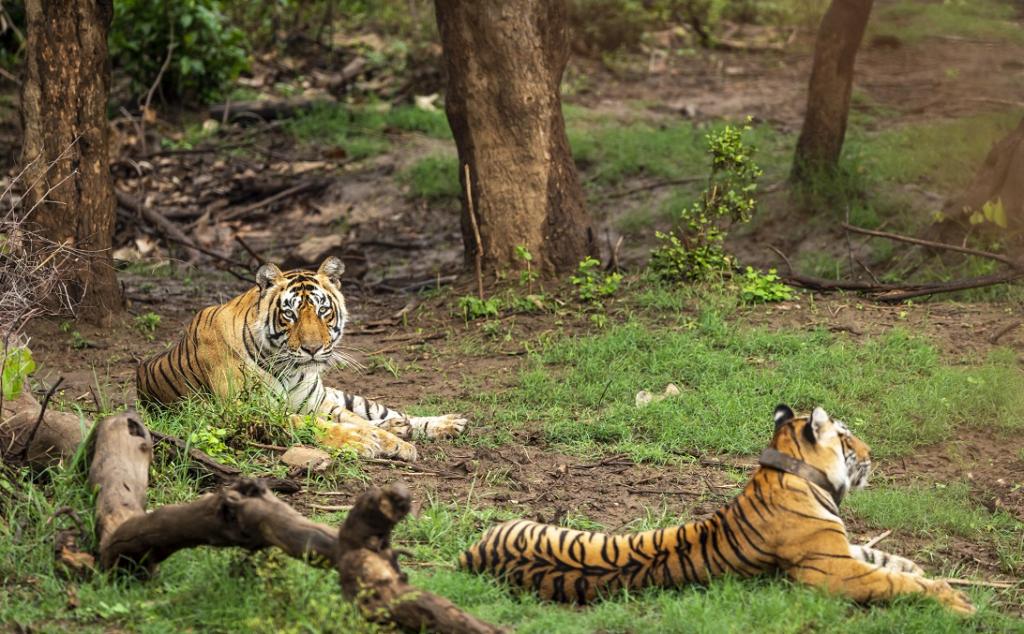 There were 23 full grown tigers and four cubs at the reserve in 2021. Photo: iStock

A forest fire that began in the Sariska Tiger Reserve (STR) March 27, 2022, has gone out of control and spread in an area of around 10 square kilometres on the night of March 28. The fire has endangered the lives of tigers in the reserved forest.

The Indian Air Force (IAF) deployed two Mi 17 V5 helicopters to control the fire March 29, at the behest of the Alwar district administration.

There have been forest fires this month in:

A total of 381 forest fires have been reported in India by March 30, 2022, according to the Forest Survey of India. Madhya Pradesh has recorded the highest number of fires at 133.

The IAF shared the video of the operation in Sariska and tweeted information stating that fire-fighting operations were underway since the morning of March 29.

At the behest of Alwar Dist admin to help control the spread of fire over large areas of #SariskaTigerReserve, @IAF_MCC has deployed two Mi 17 V5 heptrs to undertake #BambiBucket ops.

The two IAF choppers are trying to put out the fire by fetching water from Rajasthan’s Siliserh lake.

A press statement released by the Conservator of Forests and Deputy Field Director Sariska Tiger Reserve, RN Meena March 29 stated that the helicopters would be deployed continuously to put out the very last flames and embers:

The helicopters have been deployed to put out the fire in the high-altitude areas where the fire brigades could not reach. To prevent the risk of rekindling of fire from the dried tree branches we will continue showering the area with the helicopters until every last ember has been put out.

Meena told Down To Earth March 30 that the fire was almost under control but needed continuous vigilance for the next one week.

A press release by STR March 28 said the fire posed a threat to tigress T-17 and her two new-born cubs. The forest authorities were worried that the smoke from the fire may suffocate the tigers.

However, in a telephonic conversation with Down To Earth, Meena said, “I cannot comment on this matter. According to my understanding, there are not many tigers in the area where the fire spread. It is not an issue.”

According to the State Board of Wildlife, there were 23 full grown tigers and four cubs at the reserve in 2021.

The STR statement noted that the fire began from the hilly areas of the Akbarpur Range in the Baleta-Prithvipura Naka on the afternoon of March 27. The fire began because of dry grass, leaves and plants because of reasons unknown to the park authorities. Locals tried to contain the fire by making fire lines and taking the help of the local fire-brigade but could not succeed.

“The smoke from the fire has disturbed the honeybees in the forest that are now buzzing around in large numbers, making things more difficult,” the press statement said.

Around 200 people of the STR and the Alwar district tried to control the fire by traditional means on March 27. Meena told local media that they had succeeded in controlling the fire before the break of dawn but the remaining embers were spread around by the wind, causing the massive inferno.

“We have been trying to put out the fire since March 27 night. Fire brigades were deployed and carved out fire lines, but we did not get expected results. After the fire spread to the hilly areas, it became difficult to tackle and we had to ask the IAF to put it out,” he added.

Meena told DTE that an inquiry to investigate the cause of the fire had been initiated by the STR.

Around 10 pm March 27, the Malakhera police station gave orders to the people living near the forest to vacate the area.