Why are reproductive healthcare rights of displaced women not protected in India? 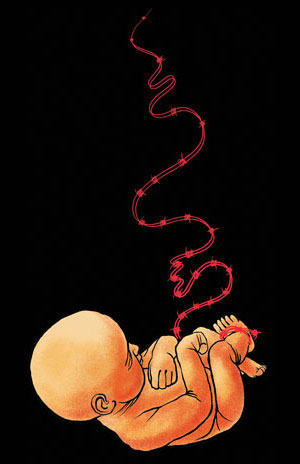 Internally Displaced Persons (IDPs) are those affected by natural or human-made disasters and armed conflicts. They experience a terrible life, where insecurity, fear and livelihood loss are their only companions. That’s why they are considered to be one of the world’s most vulnerable groups. Displaced women face even greater problems, given their special health needs.

Global trends reveal that around 80 per cent of such people in the world live in Afghanistan, India, Myanmar and Pakistan. But collating their numbers in India remains a challenge as there is no central agency monitoring the number of displaced people.

According to the Internal Displacement Monitoring Centre, a global information institution working on internal displacement, 650,000 people in central India (Chhattisgarh, Andhra Pradesh and West Bengal), Northeast (Assam, Mizoram-Tripura and Manipur), Jammu & Kashmir, Odisha and Gujarat were displaced due to armed conflict and ethnic or communal violence in 2009 and during the first half of 2010. An unknown number of displaced people were living in cities. In South Asia, about 42-52 per cent of the IDPs are women, estimates the South Asian Forum for Human Rights, a public forum working for human rights. In India, many displaced communities are categorised as migrants and not as IDPs.

Studies on gender issues in displacement indicate displaced women in India face a host of predicaments. They suffer more than displaced men because of gender inequalities in terms of ownership of productive assets, access to resources, control and decision-making over usage of assets. Even inside the relief camps, displaced women have fewer rights compared to men.

In many cases, displaced women are forced to stay in a violent and abusive marital relationship as the rent or ownership of the house is controlled by the abuser. The loss of livelihood and income, as well as changes in social roles and status, often result in domestic violence. Marginalised both socially and economically, they are prone to exploitation.

More than displaced men, what makes the lives of displaced women even more painful is that they do not have access to reproductive rights; they suffer from poor health amid threats of eviction. The United Nations High Commissioner for Refugees says that globally about 15 per cent of displaced women experience complications during pregnancy or during delivery and require emergency obstetric care. In the relief camps, they face unwanted, unplanned, and poorly spaced pregnancies due to lack of access to healthcare services and contraceptive supplies, according to a study conducted by the Johns Hopkins Bloomberg School of Public Health and the International Federation of Red Cross and Rest Crescent Societies. Worse, IDPs survive in over-populated relief camps with scarce water, clothing and food facilities, as was the case in Assam, where 200,000 people were displaced due to ethnic violence in 2014. Unhygienic environments due to poor sanitation made them susceptible to malaria, jaundice, influenza and dysentery and other diseases. Pregnant women were reportedly giving birth to premature babies due to inadequate healthcare facilities.

There are other problems related to healthcare access. In Kashmir, displaced women face distance barriers to avail healthcare facilities necessary during pregnancy. There are instances of pregnant women who tripped and fell leading to miscarriages. Further, women who had a caesarean delivery were found to suffer from infection due to septic stitches. A study in 2009 by Friedrich-Ebert-Stiftung, India, revealed women displaced due to development projects in Odisha, Jharkhand, Chhattisgarh, Uttarakhand, and Rajasthan had lost access to livelihood. Another study in Lanjigrah block of Kalahandi district, Odisha, found that displaced women were being forced into trafficking and sexual abuse due to land alienation. Increased workload for displaced women in the rehabilitation colonies had undermined their reproductive health. With little awareness about rehabilitation schemes, destitution is common among IDPs.

The Right to Fair Compensation and Transparency in Land Acquisition, Rehabilitation & Resettlement Act, 2013, is the only national law that seeks to address problems faced by people displaced due to development. But there are no provisions to address the reproductive healthcare rights for displaced women under the law. Though the UN’s Guiding Principle on Internal Displacement of 1998 underlines their reproductive rights, these guidelines are not legally binding. So the issue is left entirely in the hands of the affected country to enact laws to protect and rehabilitate them. Countries such as Kenya, Afghanistan and Pakistan have recently ratified national policies for IDPs. It is time India too constituted a governing body not just to record the number of IDPs, but to formulate a policy to protect their basic rights, importantly, their reproductive rights.