While it may bring cyclonic rain, it won’t delay the monsoon in India, say experts 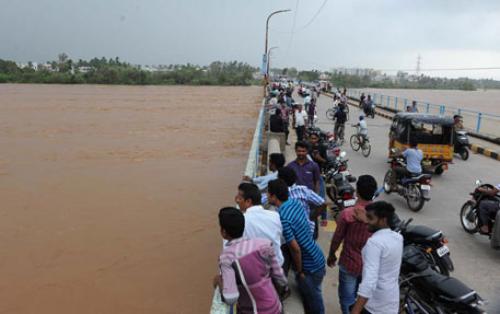 A tropical depression that brought floods to Sri Lanka is moving north towards southern India, where it is expected to bring cyclonic rains. But it is not likely to delay the march of the southwest monsoon in India, say experts.

The concerns about the depression delaying the monsoon have been sparked given its timing. For instance, Cyclone Aila, which formed over the Bay of Bengal on May 23, 2009, and Cyclone Ashobaa, which built up over the Arabian Sea in June last year, were both known to delay monsoons.

However, experts say there is nothing to worry. “It is important to note that Aila was a very strong cyclone, which, by virtue of being farther north of this one (the present depression), had pulled in dry continental air and therefore delayed the monsoon. As far as Ashobaa is concerened, it formed much later than this one and, by that time, monsoon had just begun to set in,” said Biswajit Mukhopadhyay, a scientist with the Climate Services Division of the India Meteorological Department (IMD).

According to a forecast issued by Sri Lanka’s Department of Meteorology, the storm developed after a low pressure area in the Bay of Bengal first intensified into a depression and then moved 400 km north of the port town of Kankesanthurai on the Jaffna peninsula.

“There doesn’t seem to be a correlation between the heat wave in India and the formation of this depression,” said Mukhopadhyay. The formation of a depression results when an area in water has (a) an unstable atmosphere and (b) a fairly constant wind speed in a vertical column. Such an area is called an Intertropical Convergence (ITC) Zone, he explained.

The storm has brought floods to Sri Lanka in which 37 people have died and 25 have been injured, the country’s Disaster Management Centre has claimed. “It is a highly-expected development because this is the season for the formation of such depressions,” Mukhopadhyay said. Major floods in Sri Lanka are associated with two monsoons, the southwest, which strikes between May and September and affects the western, southern and Sabaragamuwa provinces. Then, there is the northeastern monsoon, which strikes between December and February and affects the eastern, northern and north-central provinces.

As the depression moves further away towards the eastern coast of India, the IMD predicts heavy rainfall, strong winds and rough sea conditions in southern states. Extremely heavy rainfall is expected over north coastal Tamil Nadu and Puducherry in the next 24 hours, and Andhra Pradesh and Karnataka in the next 48 hours. North Tamil Nadu and Puducherry can also expect winds up to 55-65 kmph gusting to 75 kmph in the next 24 hours, while Andhra Pradesh is destined to a similar fate in the next 48 hours. Kerala and Lakshadweep can also expect winds speeding upto 40-50 kmph.