We have never seen anything like this before: dust storm victims in Rajasthan, UP

Although the local administration had generated alerts about the dust storm, the intensity and scale was unexpected and unprecedented 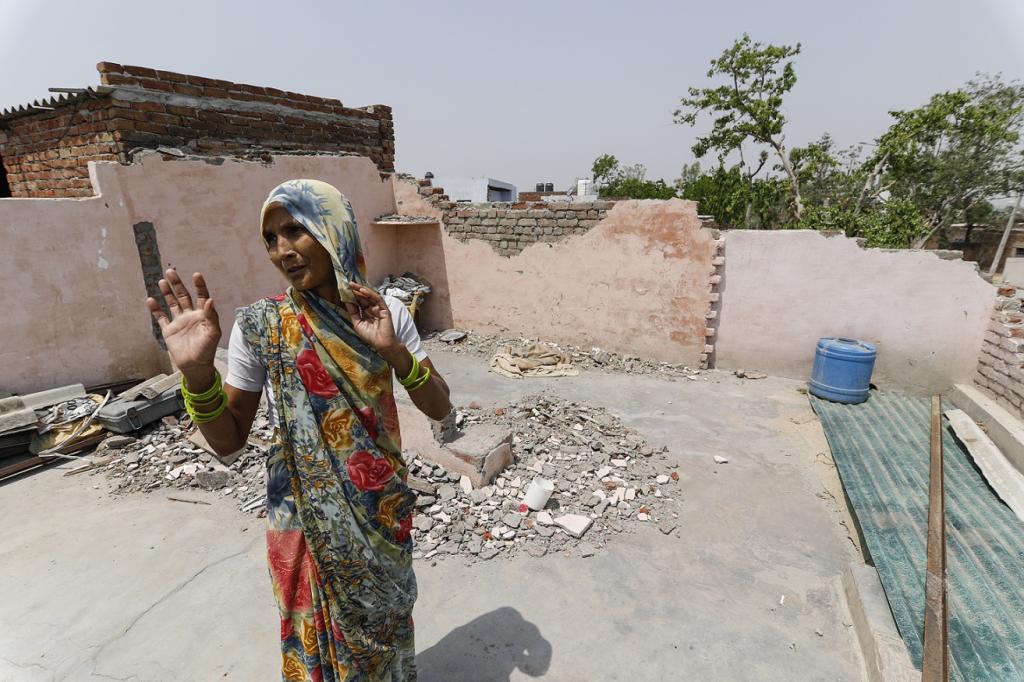 On the night of May 2, the people of Rajasthan witnessed a dust storm that they had never witnessed before. When this reporter from Down To Earth spoke to people across the two most affected regions of Bharatpur and Deeg from the very young to the very old, only one answer emerged: "I have never seen anything like this before."

As Down To Earth drove down from Agra towards Bharatpur, the entire road was littered with fallen trees, branches and electric poles. Every second tree had been damaged by the storm. In the most affected region in every other house, tin roofs and overhead plastic tanks had flown to far off places.

"People have even reported motorcycles and sheep flying into nearby villages," J P Singh, chief programme manager of Lupin Foundation in Bharatpur told Down To Earth. His organisation is working closely with village communities on restoration efforts in the region.

"The local administration and Lupin had generated alerts about the dust storm but the intensity was unexpected and unprecedented," says Singh. On the ground, people say that the major difference between usual dust storms and the latest one was the amount of rain and hail it brought with it.

"Dust storms, which are common in the region, carry very little rain with them. But this was different. There was heavy rain and hail which caused the damage along with strong winds," says Punit Verma, programme coordinator at Lupin. "Nobody had seen such strong winds in the region before. The thunderstorm on April 11-12 had wind speeds of 130 km/hr, but this was much higher," he adds.

Beyond casualties and economic cost

Initial assessment suggests losses of property in Bharatpur district alone could be worth more than Rs 100 crore. The survey by the district administration is still ongoing and the final number could be much higher. Twenty five people have died as a direct result of the storm in Bharatpur district with Bharatpur and Deeg Tehsils having the highest number of casualties. But a mere data point cannot capture the fear, pain and anguish suffered by the people on the ground on the fateful day.

In Januthar village of Deeg, six young men had gone for their daily run and exercise routine to the nearby Maharaja Surajmal college ground. When the dust storm slowly crept in after a regular hot day, the men thought that it would pass and waited. But in a matter of minutes, the storm picked up great speed and threw three of them into the air. The rest took cover under a gateway to the college near a 4ftx4ft pillar.

The rain and hailstorm followed, not letting them move from that place. In a matter of seconds, the pillar collapsed and all three of them were crushed under it. It took a JCB to remove the pillar. None of them survived. One of them, 20-year-old Chandravir, was going to join the Delhi Police on May 15. 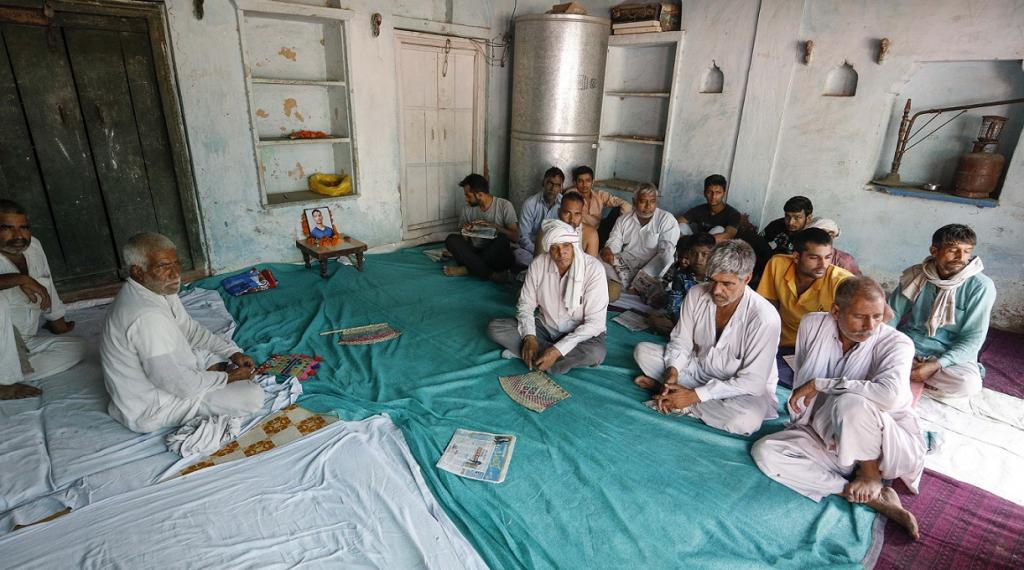 "Chandravir was a very talented kid and he could have done wonders if he had not been taken from us so early," says his father, Lakshmans. The family is now demanding a job for his younger brother from the government. All three men came from poor farming families and they were the only hope for the families.

Long after the storm has passed, misery continues to linger. It left the residents thirsty and in the dark. The storm uprooted some 5,000 electric poles in the region. It also destroyed around 40 RO plants. People could not use their submersible pumps in the absence of electricity. Though the district administration has been working tirelessly since that day, electricity in many of the villages had not been restored at the time Down To Earth paid a visit. 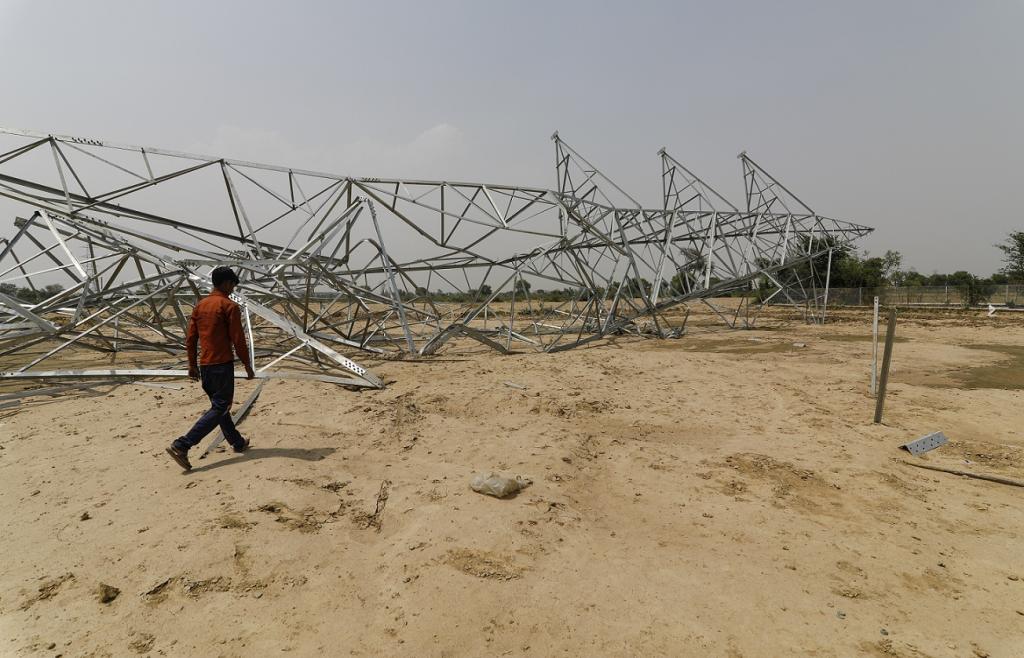 Water and electric generator suppliers took advantage of this situation, increasing the prices for their services by 10 times. A bottle of RO water was selling at Rs 50 in Bharatpur, while its actual price is around Rs 5. To rent generators for a couple of hours, one has to shell out Rs 1,500.

The problem is more acute in the rural areas. In Sheeshwaada village of Deeg block, water has become a scarce resource with women thronging to dug wells to collect whatever little drinkable water is left there. But the water level is also fast depleting. There will be no water to drink in the village if electricity is not restored soon.

Question of livelihood loss and compensation

Livelihoods in the region have been hit as cattle, sheep and goats have fallen prey to the storm. In Kheda Karauli village of Kumher block, two brothers—Prahlad Singh and Malkhan Singh—lost 56 of their sheep. They are traditional herders and this is their only source of livelihood.  “I was at the Mandi when the storm struck. When I came back all I had was lost,” says Prahlad Singh.

His younger brother Malkhan Singh’s wife was at home at the time but could not save the sheep who were housed in three halls adjoining their house.

No help has yet come for these brothers from the government but they have received some initial compensation from Lupin. The local employee of Lupin had come to visit the brothers on the following morning of the storm and gave them Rs 11,000. But this is a drop in the ocean for the brothers who have lost almost Rs 600,000-700,000. The compensation that has been promised by the state government is Rs 3,000 per sheep lost, which will cover only one-fourth of the total loss.

Bharatpur’s famous honey industry has also been affected by the storm. Sunil Kumar Gupta, who runs a honey factory on Bharatpur-Agra highway, incurred damages of up to Rs 5 million. One of the walls of his factory collapsed and fell on the drums of honey kept there. The honey flowed out and the rain washed it all into the drain, making recovery impossible. The boxes in which the beekeepers keep their bees have also been either broken or swept away by the gusts of wind. According to Gupta, they have lost 20-25 per cent of their boxes.

The administration in the region is doing all it can to restore life back to normal. "Our top priorities are to restore electricity and water services for the people,” Dhulichand Meena, the SDM of Deeg Tehsil told Down To Earth. "In such circumstances, the community has to come together and work together to support the administration," he concludes.