What fuelled this year's flood fury in Pune?

Pune, which had not seen floods in years, was hit twice by the disaster in 2019. First in early August and then in September; the latter was rather destructive. On September 25, parts of the metropolis were inundated after receiving 87.3 mm rainfall; at least 17 people were killed.

Most of the destruction and loss was experienced near the banks of Ambil Odha, a stream, and Bhairoba Nullah. There was more than 10 feet water in Sandeep Koshti’s house situated on the banks of the stream in Katraj area.

“I have never seen such flooding in the 15 years that I have lived here. This change happened when the width of the odha (stream) was reduced to about eight feet from more than 20 feet, and the depth was reduced to 3.5-4 feet from about 12 feet,” said Koshti.

“The odha can no longer carry the amount of water it used to. It has been killed!” he added while blaming rampant construction and destruction of mountains for this situation.

The region resembles a saucer with hills on its edges. Ambil Odha originates in these hills, which are a part of the Western Ghats., in the southern part of Pune in Katraj area.

The stream flows from these hills towards the north, which is towards the centre of Pune. Many smaller streams join Ambil Odha before it meets the Mutha river. All these water bodies are part of the Krishna River Basin.

Balaji Baji Rao (aka Peshwa Nanasaheb, 1720-1761) reportedly built bunds on Ambil Odha after observing the natural depression in the landscape, recounted Shailaja Deshpande, one of the founders of non-profit Jeevitnadi.

During that time, Pune depended on the Ambil Odha as Mutha and Mula rivers were slightly far from the settlement. Bajirao created a lake system along the Ambil Odha, she added.

When the Katraj lake filled up, excess water went to the next lake in what is now the Rajiv Gandhi Zoological Park. The flow was then diverted to a beautiful lake near Sarasbaug to arrest run-offs coming from Katraj hills.

The Sarasbaug lake does not exist anymore. The size of Katraj lake is reduced and the edges are sharp and deep. It gets filled up with silt soon, she said.

Also, due to heavy mining and cutting of Katraj hills, flow channels of all first order and second order streams have either vanished, been diverted, or disturbed, said Deshpande.

So when there is heavy rainfall, water flows down like a sheet, resulting in flash floods, explained Deshpande. “Odha mhanje odhto to (Odha means the one that pulls), so it runs with force and speed,” she said.

The Katraj mountains have steep slopes, thin soil layer due to wind and water erosion, and dry deciduous vegetation. All this together increases run-offs, resulting in flash floods since historical times, she explained.

Shrikant Gabale, an expert in Geographic Information Systems and the director of Unity Geospatial, explained with maps what Koshti and Deshpande observed. 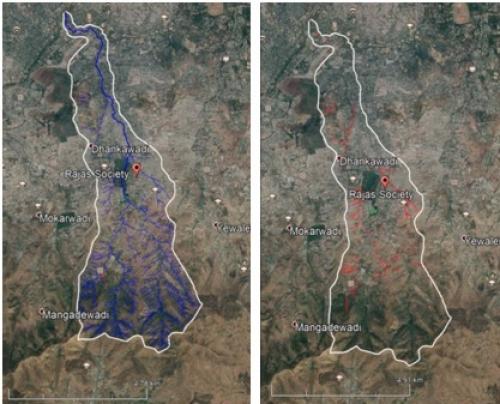 From his observation and study, he noted,

“After 2015 (when he concluded his study), the condition definitely worsened. It is likely that 10 per cent more streams have disappeared,” he said while adding that there is a 5-7 per cent increase in frequency of flooding.

Pune’s weather pattern has changed over the years. Earlier, monsoons used to begin on mid-June and there was rainfall throughout the season.

Now there are short and intense bursts of precipitation for a week to 10 days in June, July, August and September, said Deshpande.

This year India recorded second-highest September rainfall. Monsoon rainfall during September 2019 was 152 per cent of its Long Period Average after 1917’s 165 per cent, according to India Meteorological Department records.

There is inter-annual variation every year in the monsoon rainfall pattern, explained Anupam Kashyapi, head of weather, IMD Pune.

The week before the moderate rainfall associated with the intense spell in Pune in September, two systems of upper air cyclonic circulation — one coming from the coast of Andhra Pradesh, Telangana and one from North Konkan-Madhya Maharashtra — dragged some moisture to Maharashtra. This, by itself, was not enough to make the monsoon very active.

The cloud cover in the sky was generally cloudy with around 5-6 octa cloud, due to which solar insolation reached the Earth's atmosphere. This increased the temperature from 30 to 32 degrees Celsius, higher by 4-5 degrees Celsius compared to previous days. The moisture during these days was more than 85 per cent, especially from evening to early morning.

The increased temperature and high moisture triggered local instability in terms of convective activity. This led to formation of cumulus clouds initially around 4-5 pm, which turned into cumulonimbus cloud as the evening progressed. Cumulonimbus clouds are thundery clouds, which brought intense spells of rain with thundery activity, lightning.

Thundery clouds bring unevenly distributed rainfall in the city, he explained. “We had predicted increased rainfall activity in the city 5-6 days before the event, especially from the evening of September 24,” said the IMD official.

Now, every time clouds gather in the sky, Koshti’s heart skips a beat. “I’m worried the next monsoon will bring even bigger losses,” he said.