Why fires that scorched the Amazon are a planetary emergency

From the Arctic to the Amazon, fires are raging at an unprecedented scale, stoking an unfathomable fear: is the planet staring at an irreversible meltdown?

As environmentalists and world leaders continue to blame the Brazilian government’s recent policy changes for an increase in fires in the Amazon this year, President Jair Messias Bolsonaro has yet again insisted that the country has sovereignty over its rainforest. In a hard-hitting speech to the 74th Session of the United Nations General Assembly on September 24, Bolsonaro said it is a misconception to state that the Amazon is a world heritage.

“Resorting to these fallacies, some countries, instead of helping, have followed the lies of the media and behaved disrespectfully, with a colonialist spirit… The Amazon is not being destroyed nor consumed by fire… Each one of you may check what I am saying,” said Bolsonaro, who came to power in January on campaign promises to restore the economy by opening up the Amazon’s natural resources for mining, logging and commercial agriculture. Since then, he has defunded several institutions, including the Brazilian Institute of Environment and Renewable Natural Resources (IBAMA), which is responsible for fighting fires and arresting perpetrators.

Till the first week of September Brazil’s space research centre, the Instituto Nacional de Pesquisas Espaciais (INPE), had recorded over 100,000 fires across the country — the highest since it began keeping records in 2013 and a 45 per cent increase on the same period last year. More than half of these cases were inside the Amazon, where, say activists and witnesses, farmers, loggers and land grabbers organised large-scale slash-and-burn operations with a sense of impunity.

Bolsonaro has further told world leaders that his country would use the rainforest’s resources as it sees fit, adding that the Ianomami and Raposa Serra do Sol Reserves have plenty of gold, diamond, uranium, niobium and rare earths, among others.

His speech has drawn criticism from all quarters. Márcio Astrini, public policy coordinator at Greenpeace Brazil, declared that "the president's speech about the environment was a scam." “Bolsonaro is trying to convince the world that he is protecting the Amazon, when in reality he is promoting the dismantlement of the environment.”

"The President's speech about the environment was a scam. Bolsonaro is trying to convince the world that he is protecting the Amazon, when in reality he is promoting the dismantlement of the environment" - Márcio Astrini, Public Policy Coordinator, @GreenpeaceBR pic.twitter.com/QLK9AAoJLB

Marina Silva, a former environmental minister who presided over a massive reduction in deforestation in the 2000s, said: “President Bolsonaro's speech at the UN general assembly was a concrete demonstration of something very dangerous, by crossing the dividing line of what it means to be a democracy. The speech attacks human rights, major agreements, multilateralism, and it is contrary to the very nature of Brazil. A country that is giant by nature itself has to be giant by the nature of the decisions it takes to protect its originating peoples and their environmental assets.”

But more than the backlash, Bolsonaro’s speech has reignited a perennial debate: how does one protect an ecosystem that has value to the world but falls within the borders of a country? Finding a solution is vital at a time when several other ecosystems are heading towards similar tipping points, either because of climate change or human activities. 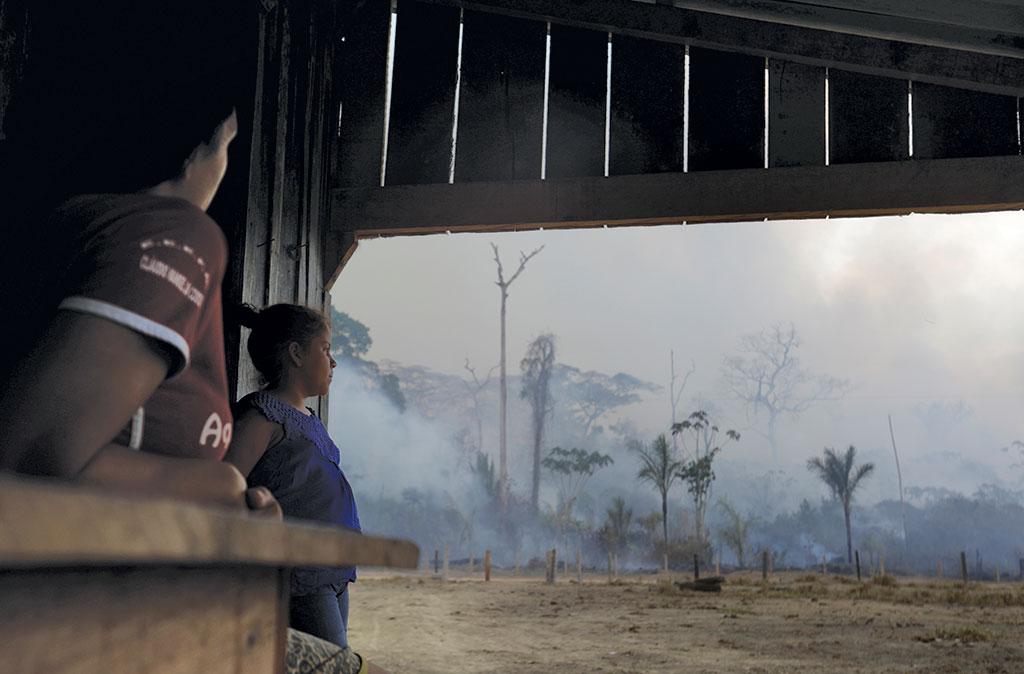 Consider the Amazon rainforest. The world has a vested interest in it as what happens in it has global implications. Spread over 5.5 million square kilometres (sq km), the Amazon is home to at least 40,000 plant species, 427 mammals, 1,300 birds, 378 reptiles, more than 400 amphibians, around 3,000 freshwater fishes and 100,000 invertebrate species. According to the Food and Agriculture Organization of the UN, the Amazon holds over half of the terrestrial species of animals, plants and insects and is home to some 420 indigenous communities which play a key role in conservation of this biodiversity.

The Amazon is also an important buffer against rising levels of CO2, much of which is absorbed by vegetation as it grows. Climate models suggest that it acts as a large carbon sink by absorbing a quarter of the carbon taken up by forests worldwide every year. If burnt, says Uma Charan Mohanty, meteorologist and an emeritus professor at the School of Earth, Ocean and Climate Sciences of the Indian Institute of Technology, Bhubaneswar, the Amazon could become a net emitter. Burning releases huge loads of CO2 and black carbon or soot. The loss of green cover will reduce its capacity to absorb CO2 and produce oxygen. Together, they exacerbate global warming.

This ecosystem service is of high importance to European countries. In July, while taking over the presidency of the European Council, Finland Prime Minister Antti Rinne, said: “Solving the climate crisis could be Europe’s next heroic act, one that will be admired and praised by future generations.” Besides, reducing forest degradation in the Amazon allows them to clean up their own act. Under REDD+, countries can offset their carbon emissions and achieve climate goals by financing forest protection and sustainable development elsewhere. This is precisely the reason, industry-heavy Norway and Germany are the largest contributors to the Amazon Fund. 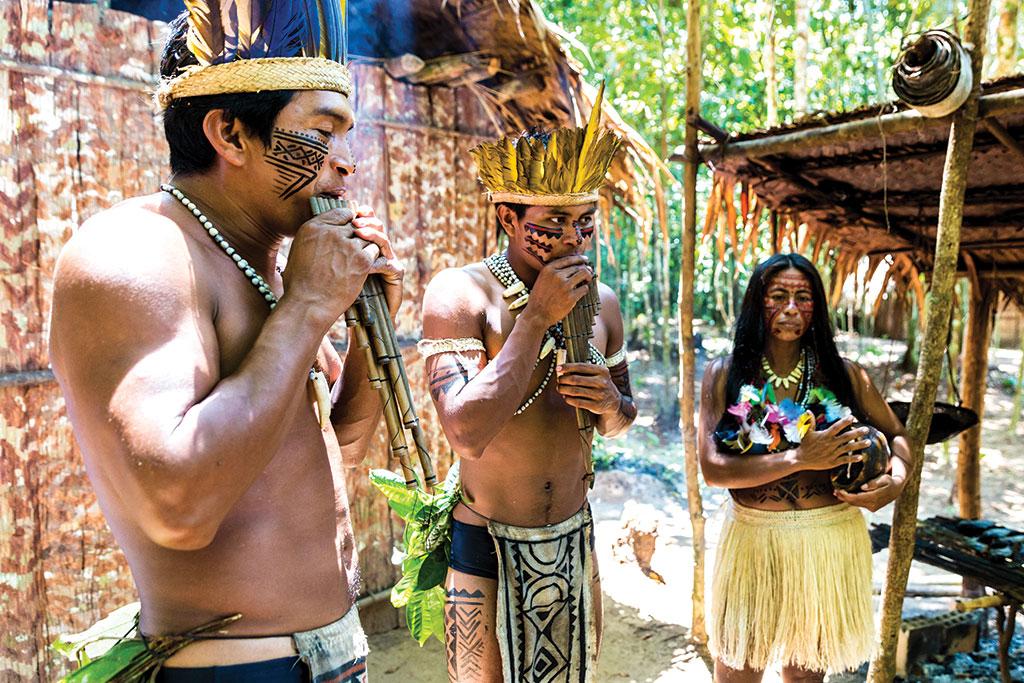 Besides, the Amazon is a hydrological powerhouse. Every tree here is a fountain, sucking water through its roots and releasing vapour into the atmosphere. These vapours form clouds and create rainfall hundreds or even thousands of kilometres away. Arie Staal of Wageningen University in the Netherlands reported earlier this year that one-third of the rain falling in the Amazon basin comes from moisture generated within the basin, mostly by transpiring trees. But frequent forest fires in the times of climate change are pushing the ecosystem to a tipping point, or the point beyond which changes to the ecosystem become irreversible.

A recent evaluation by Carlos Nobre of the Brazilian Academy of Sciences, headquartered in Rio de Janeiro, shows the tipping point could occur with as low as 20 to 25 per cent of forest conversion. Since 1985, the Amazon has lost 400,000 sq km of vegetation cover, or 17 per cent of its original area, says online database Map-Biomas. “Post-deforestation climate will no longer be a wet climate like the Amazon. It will become drier and have a much longer dry season, like the long dry seasons in the savannas in the tropics in Africa, South America and Asia,” Nobre told Yale Environment 360, published at the Yale School of Forestry and Environmental Studies, United States (US).

“Through evapotranspiration, forests recycle water into the atmosphere, so that agricultural areas downwind of large tracts of continuous forest get more rainfall than areas downwind of deforested patches,” says Deborah Lawrence, professor of environmental sciences at the University of Virginia, US. “Deforestation in the Amazon is likely affect agriculture elsewhere in the Americas. Massive amounts of carbon would be lost to the atmosphere as trees succumb to drought and fire — all CO2 stored over centuries or millennia would go up in smoke.” 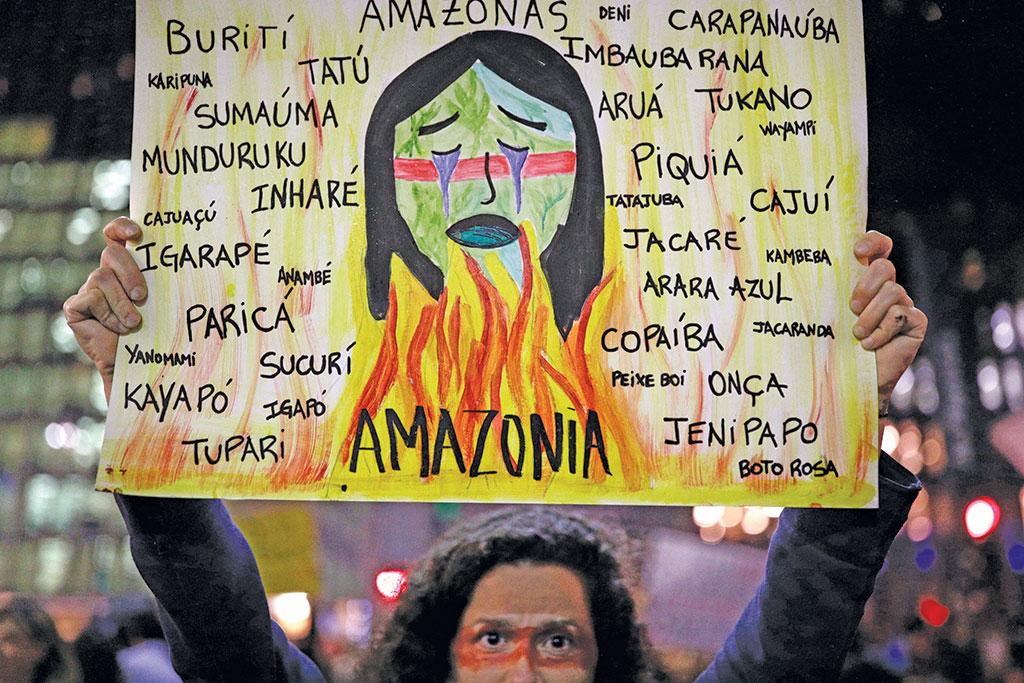 Halfway across the world, the Arctic region is also burning at a historic pace. Between July and early September, fire had charred about 2.4 million hectares (ha) of Siberian forest. In Alaska, fires had consumed 1 million ha of tundra and snow forests. Although wildfires are common in the northern hemisphere between May and October, the latitude and intensity of these fires, as well as the length of time that they have been burning for, has been particularly unusual, according to Mark Parrington, senior scientist and wildfires expert with Copernicus Atmosphere Monitoring Service (CAMS) of ESA. While it is not known what has triggered fire in the Arctic, the region is warming twice as fast as the rest of the planet. This summer, parts of Alaska broke records: Anchorage reached a high of 32 degrees Celsius (oC) on July 4, when the average temperature for that date is 23oC. In Siberia, where wildfires are raging, the average June temperatures were almost 10oC higher than the 1981-2010 long-term average. “The heat is drying out forests and making them more susceptible to burn,” says a release by the World Meteorological Organization (WMO).

Studies show a warming world would see more lightning events, and in remote areas they are a significant cause of fires. According to an article by ScienceDaily, since 1880, the world has warmed by 1.9 degrees Fahrenheit, with the five warmest years on record occurring in the last five years. Since then, the wildfire season has lengthened across a quarter of the world's vegetated surface, and in some places like California, fire has become nearly a year-round risk.

These fires have serious consequences for the world. For instance, compared to the Amazon rainforest, which stores about 320 tonnes of carbon per hectare (t/ha), tundra grasslands store 218-890 t/ha carbon. Along with the permafrost soil of the tundra, the snow forest, also known as boreal forests, hold 1,700 gigatonnes of carbon. The boreal forest ecosystem, which encircles the Earth just below the Arctic, covering large swathes of Russia, Canada and Alaska, is the biggest terrestrial carbon store in the world, says a 2015 research published in Global and Planetary Change.

Unlike tropical forests, where carbon is mostly stored in trees above ground, 95 per cent of carbon in boreal forest is stored in ground — in permafrost soil and peatlands. In fact, 80 per cent of the world’s peatlands are found in the boreal region. In case of wildfire, in addition to trees and grassland, peat also burns, releasing much more CO2 than trees. According to WMO, since the start of June CAMS has tracked over 100 intense and long-lived wildfires in the Arctic. In June alone, these fires emitted 50 megatonnes of CO2 into the atmosphere, equivalent to Sweden’s annual emissions. This is more than what was released by Arctic fires in the same month between 2010 and 2018 combined. A Greenpeace estimate shows that massive blazes in Siberia this year have released more than 166 tons of CO2, nearly equal to the annual emissions of 36 million cars.

Wildfires in the pristine Arctic can have a domino effect. Particles of smoke can land on snow and ice, causing the ice to absorb sunlight that it would otherwise reflect, and thereby accelerating the warming in the Arctic. Fires in the Arctic also increase the risk of further permafrost thawing that releases methane, which is also a greenhouse gas, says WMO.

The repercussions are clearly palpable at places where ecosystems have passed the tipping point. A research team, headed by Garry Peterson of Stockholm Resilience Centre in Sweden, has analysed 30 ecosystems with potential tipping points and have found that almost half of them are linked. Crossing one tipping point increases the risk of crossing another and so triggering a whole cascade of disasters. And, as Peterson says, we may not even recognise the danger until it is too late.

With inputs from Rajat Ghai

This was first published in Down To Earth's print edition dated 16-30 September, 2019