Natural dye can be used in applications such as DNA fingerprinting 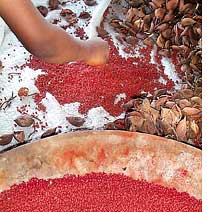 indigenous knowledge can now be deployed for a common laboratory procedure. Annatto, a reddish orange dye, is used by indigenous people in many parts of Latin America as a cleanser of poisons. Obtained from the plant Bixa orellana, it is also commercially used to colour foods such as cheese and butter. Now a study by researchers of the Vellore Institute of Technology (vit), say annatto can be a substitute for the poisonous dye, bromophenol blue in gel electrophoresis, an important biotechnological tool used in laboratories.

Electrophoresis separates dna or protein fragments by size. It has applications in a variety of fields including dna profiling, fingerprinting and developing hiv detection kits. But the process uses bromophenol blue which is accompanied with chemical which can cause skin irritation, even cancer. Annato reduces their use. The Vellore study says annatto is safe and as reliable as bromophenol blue. Bixa, the plant from which it is derived, is common in India.

The Vellore researchers used proteins and ran them with both annatto and bromophenol blue. The movement of protein fragments along the electrophoresis gel was similar for both dyes. The researchers then conducted another test, the Western blot, which helped to identify the exact proteins separated by the electrophoresis test. The protein bands were same as that separated by the use of bromophenol blue. The researchers believe that this allayed apprehensions that annatto being a complex organic material could interact with the protein samples and skew the results. But some remain unconvinced with the research. " dna and proteins are often boiled to fragment them. The Vellore researchers did not do that. There are more chances of the plant protein to react with the samples after they have been boiled," says Rakesh Mishra of the Centre for Cellular and Molecular Biology, Hyderabad. The authors do not think this is a problem but they do accept that their technology has limitations. "Annatto cannot be stored for more than a week but we felt it would be a step towards using eco-friendly practices," says R Siva of vit's biotechnology department and the author of the paper. The research was published in the March 2008 issue of the journal, Current Science.