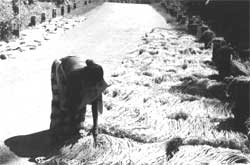 the future belongs to natural fibres. Synthetic materials could be replaced by them in diverse applications, including the making of golf clubs, tennis rackets, bicycle frames, boat hulls, bath tubs and archery bows. Synthetics are composite materials -- plastics reinforced with glass or carbon fibres. The fibres are very strong and stiff, while the plastic is soft and flexible. But when both are combined they give composites a very high strength-to-weight ratio.

However, they have their disadvantages. Glass fibres could pose a risk to human health and, most important, disposal of glass and other synthetic fibres is a major problem. And this is where natural fibres make their mark. As Bob Coutts, chief research scientist in the composites and adhesives division of Australia's national research organisation, Commonwealth Scientific and Industrial Research Organisation, Melbourne, said, "Natural fibres are abundant, renewable, cheap and of low density and are biodegradable."

Unlike other materials like Kevlar, which is a polyamide of carbon or aramid, and glass fibres, natural fibres also have an environmental advantage when burnt. Says Jamie Hague, assistant director of the BioComposites Centre, a part of the University of Wales at Bangor, uk, "All plants are carbon dioxide neutral. If they (natural fibres) are burnt at the end of their life, no additional co 2 will be released into the atmosphere. Moreover, they can be recycled several times and yet maintain their length and strength."

Car manufacturers, beleaguered by a spate of environmental legislations, are making a beeline for them. "In Germany, car manufacturers are aiming to make every component recyclable or biodegradable," remarked Hague. Daimler-Benz is currently the world leader in using natural fibres in its vehicles. Since 1995, the door panels in their Mercedes g -class have been made from plastics reinforced with flax fibres. A British manufacturer is also working with flax fibres, while ambary or kenaf is being considered in the us .

Scientists at Daimler-Benz's research centre in Ulm, Germany, are busy developing a method to use hemp. Hemp fibres are more rigid and better than flax. It could replace the fibreglass still used in cars. If the load-bearing and impact-absorbing components of cars could be made from a material reinforced with natural fibres, it would be a significant breakthrough.

But the biggest problem encountered with natural fibres is their complicated make-up. They mostly consist of bundles of micro fibres of cellu-lose and are surrounded by layers of hemicellulose and lignin. This micro structure enables natural fibres to absorb a lot of energy, which enable them to become strong like glass fibres. But they are much less dense and if panels are to be as strong as those made from synthetics, they have to be thicker. In the case of plastic matrix, used to make composite materials, it is mainly derived from oil and is non-biodegradable.

The complicated structure of natural fibres also makes it hard to measure their mechanical properties and spot any possible weak points. Laurence Mott of the BioComposites Centre, along with Steve Shaler of the University of Maine, us , and Leslie Groom of the us department of agriculture forest service, has developed a technique used for studying the properties of natural fibres. He is using environmental scanning electron microscopy and a miniature system for gripping natural fibres to extract the same performance data that engineers have developed for glass and carbon fibres.