Residents of six villages say their leaders betrayed them

About 700 families from six of the 18 villages likely to be displaced by the greenfield airport in Navi Mumbai have rejected the compensation package proposed by the Maharashtra government.

Announcing the rehabilitation package on Monday, Chief Minister Prithviraj Chavan called it the country’s biggest. He also claimed that a delegation of farmers, implementing agency for the airport City and Industrial Development Corporation (CISCO) and the Maharashtra government had met and reached a consensus on the package.

At the meeting the project-affected villages in Raigad district were represented by two members of the Legislative Assembly (MLAs), Vivekanand Patil of Panvel and Prashant Thakur of Panvel-Uran in Raigad. While Patil is a three-time MLA from the Peasants’ and Workers’ Party of India, Thakur belongs to the Congress.

Residents of the six villages say they feel cheated by their leaders who agreed to the state government offer without consulting them. “We had demanded Rs 6.25 crore per hectare as cash compensation along with 35 per cent developed plot before these leaders went to speak on our behalf to the chief minister,” says Sadashiv Patil, a member of Prakalpagrast Sangharsh Samiti set up by the 18 affected villages for the protection of their rights. He is from Pargaon, one of the six dissenting villages. The other five are Ovala, Vaghivali, Kolhi, Kopar, and Dungi. 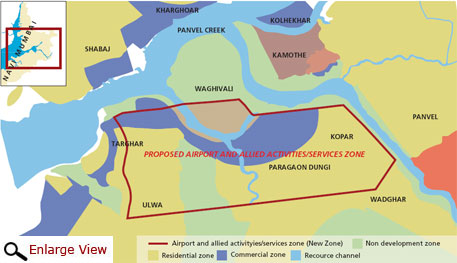 Pandharinath Keni, president of the Samiti, however, says, “The meeting with the government on Monday was fruitful. Now we have to take the message to the other farmers, so that they understand it well and there is no misconception.”

The government of Maharashtra has offered 22.5 per cent developed land; 10 per cent in lieu of cash compensation for land acquired and 12.5 per cent as part of the rehabilitation package. Over 5,000 people residing in the 18 affected villages will get plots with a floor space index (FSI) of 2. According to CIDCO officials, an FSI of 2 translates into a compensation of about Rs 25 crore per hectare.

“We will give them triple the size of their (residential) plots to construct houses. As construction cost, the state will offer them Rs 1,000 per square feet (0.09 sq m). The proposal has been accepted by the delegation of farmers,” Chavan reportedly said after the meeting.

On Tuesday, however, Vivekanand Patil told the Marathi press that he would stick to the decision of the six villages.

Mahendra Patil, head of Pargaon, says the 200-odd families in the village will lose their livelihood along with land to the project. According to the project development dossier of CIDCO, the airport’s runway would be constructed on Pargaon’s land.

The Navi Mumbai airport will require 2,072 hectares (ha) as per the proposal. According to CIDCO officials, 1,597 ha have been acquired, though about 499 ha are yet to come under its possession. Of this nearly 25 ha belong to the government. Till recently, the farmers were bitterly opposed to CIDCO’s acquisition plans for the remaining 475 ha belonging to the 18 villages.

The project may also face resistance from environmentalists working in Panvel Creek and Karnala Bird Sanctuary near the proposed airport. “We are planning to fight a case against the Union Ministry of Environment and Forests for granting the clearance to this airport,” says Debi Goenka of Conservation Action Trust. According to CIDCO officials, massive changes will be undertaken in the proposed site. These may include clearing of mangroves and altering river courses.