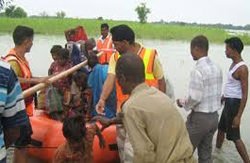 While Jammu and Kashmir is still reeling from the impact of the most devastating floods in recent history and Vadodara in Gujarat is bracing for a flood-like situation, the apex national body for managing disasters is without a functional head.

The National Disaster Management Authority (NDMA) is responsible for preparing policies for handling disasters. It also works on the implementation of the policies. But the body has not had a vice-chairperson for the past three months. Just after the United Progressive Alliance government was ousted in the recent elections and a new government was formed by the Bharatiya Janata Party-led National Democratic Alliance, several NDMA members were asked to put in their papers.

Chairperson of NDMA is the prime minister, while the vice-chairperson—who is the functional head—enjoys the rank of a Cabinet minister. Other members of the authority enjoy the rank of a Union minister of state.

The last vice-chairperson of NDMA, M Shashidhar Reddy, in a press statement issued on June 16 had said that he sent his resignation letter to the new prime minister, Narendra Modi, the day election results were declared.

While most of the members of NDMA are tightlipped over the issue, a senior member of the authority says that it is a common practice. “Officials are removed after a change in government. While some posts are vacant due to political reasons, others are vacant because people with required qualifications could not be found,” he said on condition of anonymity.

“During the Uttarakhand floods, we had taken several active steps. Our officials visited the state, interacted with the state-level officials and aided in rescue operations. But, during the Jammu and Kashmir floods, we have only been issuing alerts because without officials NDMA cannot operate effectively,” said the member.

With the weatherman issuing a forecast of very heavy showers in Maharashtra and Gujarat in the next few days, the need to put NDMA in shape is urgent.