While Iceland, Malta, Luxembourg and Germany were the quietest of all the other places, Belgium and Bulgaria were most exposed to noise 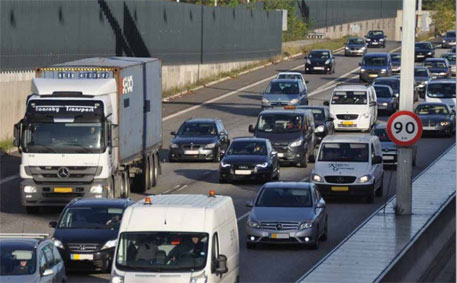 Nearly a quarter of the European Union is affected by the noise pollution that comes from traffic jams, says a recently-released report. The figure accounts for approximately 125 million people.

The report, released by Copenhagen-based European Environment Agency (EEA), further warns that the external costs of noise in the European Union account for at least 0.35 per cent of its GDP, but much higher values may be found as new findings become available.

The adverse effects of noise pollution can be found in the well-being of exposed human populations, in the health and distribution of wildlife on the land and in the sea and in the abilities of children to learn properly at school.

The European soundscape is under threat and this report sets out to quantify the scale of the problem, assess what actions are being taken and to scope those that may need to be considered in the future, in order to redress the problem. First conservative and partial estimates show that at least 1.600.000 Disability Adjusted Life Years are lost every year in the EU, mostly due to road traffic. The World Health Organization defines one Disability Adjusted Life (DALY) as one lost year of "healthy" life. The summation of these DALYs helps in measuring the gap between the existing health situation and an ideal health situation of a particular population.

Severe effects of environmental noise
EEA, in 2013, had declared that by 2020 it is estimated that approximately 80 per cent of Europeans will be living in urban areas, with road transport being responsible for a significant fraction of environmental pollution, including noise. Harmful levels of road traffic noise affect one in four people in Europe and raise health risks ranging from damage to hearing or sleep and later mental disorder, as well as increasing blood pressure and chances of developing a heart disease.

The EEA also estimated that environmental noise caused up to 10,000 premature deaths in Europe every year and more than 900,000 cases of hypertension could be traced to noise. Nearly eight million people complained of insomnia and another 20 million reported feeling “vexation” at noise pollution. The EEA findings also brought into spotlight that while Iceland, Malta, Luxembourg and Germany were the quietest of all the other places, Belgium and Bulgaria had urban areas with the highest percentages of people subjected to high levels of road noise.

The 2014 report has also enlisted some solutions to manage the problem such asaccess controls to manage the relationship between residents and traffic (especially in city centres), management including pedestrianisation, parking and loading controls and delivery time windows. A project in Ireland has won the European Soundscape Award 2014 for its work on acoustic planning and urban sound design.

No compliance to rules in India
In India, despite the government having set certain guidelines to manage noise pollution, the impact of increasing levels of noise pollution is very evident nationwide. The World Health Organization (WHO) had earlier made estimates that nearly six per cent suffer from hearing loss in India. According to a few recent records, the noisiest area in southern Chennai, Guindy, is at 107—nearly as loud as timpani and bass drum rolls. The Central Pollution Control Board (CPCB) declared that residential zones cannot exceed noise limit of 55 decibels during the day and 45 decibels during night hours. What takes a toll on the hearing ability of people is the festive season. In 2010, a noise of 111 decibels was recorded in Mumbai during Ganesh Chaturthi by the Mumbai Pollution Control Board (MPCB). Just like air pollution, level of noise pollution is also found to be on a rise in Delhi and the National Capital Region (NCR). It was recently argued in the Lok Sabha that the designated officials have to ensure maintenance of ambient air quality and provide authorities with adequate instruments to measure the level of noise. Ambient air quality refers to the quality of outdoor air in our surrounding environment. It is typically measured near ground level, away from direct sources of pollution.

Before this, Prakash Javadekar, the environment minister, had stated that the analysis of data in Delhi reveals that ambient noise standards are being violated at nine out of ten locations and there is anoscillating trend.The Delhi Pollution Control Committee (DPCC) has been requested to compute the noise level and report for further appropriate action.The officials have been designated as authority as per the Noise Pollution (regulation and control) Rules, 2000 under the Environment (Protection) Act, 1986 in the National Capital Territory of Delhi. CPCB has been using the manual sound meters since 1993, which makes monitoring the levels of noise a painstaking process and is prone to errors. However, in 2010, the authority launched an ambitious Real Time Ambient Noise Monitoring Network in April 2010 that gives fast and accurate readings. The Real Time Continuous Ambient Noise Monitoring has been conducted at 35 locations in seven cities (Delhi, Mumbai, Chennai, Kolkata, Lucknow, Bangalore and Hyderabad) since 2011.

The environment minister has also informed that all deputy commissioners and SDMs of revenue districts, assistant commissioner of police control room, all sub-divisional police officer including railways and airports, chairman and member secretary of Delhi Pollution Control Committee have been designated as the Authority for the maintenance of ambient air quality standards of noise.