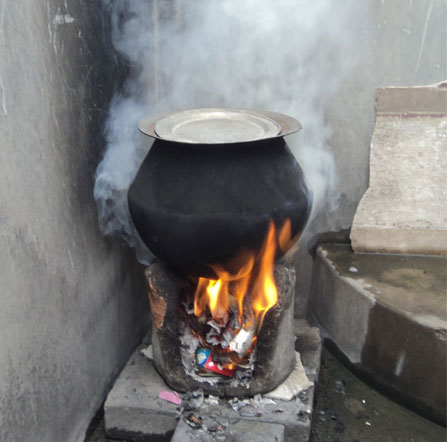 About 40 per cent of the world's population, mainly in Africa and Asia, is using fuels that result in high levels of household pollution. According to a new research, this means nearly three billion people risk ill health and early death merely from breathing the air in their homes that is polluted by fires made for cooking and heating.

The research, published by The Lancet Respiratory Medicine journal, says that women and children living in severe poverty have the greatest exposures to household air pollution.

The study, led by Stephen Gordon of the Liverpool School of Tropical Medicine and William Martin of Ohio State University, has also concluded that 600-800 million families worldwide are at higher risk of respiratory tract infections (comprising both upper and lower respiratory tract infections with viruses, bacteria, and mycobacteria), pneumonia, asthma, lung cancer and other ailments as a result of the air they breathe at home.

WHO, in a recent statement, had mentioned that About 4.3 million deaths were attributed to household air pollution exposure in 2012. Over half of deaths from childhood pneumonia are attributed to the exposure to household air pollution. Talking about climate change and its effects on human health, the international agency had warned that there was a dire need of policy and guidance that could promote public health and environment, including healthier homes and healthier transport.

“Interventions should target these high-risk groups and be of sufficient quality to make the air clean,” says the research, titled “Respiratory risks from household air pollution in low and middle income countries”. “To make clean energy available to all people is the long-term goal, with an intermediate solution being to make available energy that is clean enough to have a health impact, it adds.

India at high risk
Recently, the World Health organization (WHO), in its Global Health Report 2014, had termed India as the ninth most polluted country in the world. The report was prepared after studying outdoor air quality and pollution levels in 1,600 cities of 91 countries across the world.

A method to estimate the chronic health impact of air pollutants in U.S. residences

Reactions of ozone with human skin lipids: Sources of carbonyls, dicarbonyls, and hydroxycarbonyls in indoor air