ELECTRONIC or e-cigarettes are smartly marketed as a healthier alternative to smoking because they are smokeless—a liquid solution containing nicotine and flavourings is vaporised to simulate tobacco smoking in them. Recent researches, however, show that these battery-powered cigarettes are doing more harm than good by getting youngsters addicted to nicotine. The studies have also not found any proof to substantiate e-cigarette manufac - turers’ claim that their product helps quit smoking.

US researchers have found that ecigarette advertisements are acting as a catalyst for adolescents in Korea to start smoking. They analysed the 2011 data from the annual Korea Youth Risk Behavior Web based Survey that is conducted by the Korea Centers for Disease Control and Prevention. The sample included 75,643 youngsters from grades 7 to 12. They found that over nine per cent of e-cigarette users in Korea in 2011 were adolescents. It was less than a per cent in 2008, when the product was introduced in Korea. This despite industry claims that it markets e-cigarettes only to adults. The study was published in the Journal of Adolescents Health on July 24, 2013.

“We are witnessing the beginning of a new phase of the nicotine epidemic and a new route to nicotine addiction for kids,” says Stanton A Glantz, senior author of the research and director of the Center for Tobacco Control Research and Education (CTCRE) at the University of California, San Francisco.

False promises
Another study by CTCRE said the use of e-cigarettes is associated with quitting attempts but not with successful quitting. Researchers Lucy Popova and Pamela surveyed 1,836 US adult smokers in November 2011. They found that 38 per cent smokers had tried an alternative tobacco product, mostly e-cigarettes.

E-cigarette is just shifting the addiction from one form to another, says Monika Arora, director of the health promotion and tobacco control division of the public-private initiative Health Foundation of India.

Even the claim of e-cigarette manufacturers that the product curbs passive smoking is not completely correct. A research, published in the International Journal of Hygiene and Environmental Health in December 2013, found that ecigarettes impaired indoor air quality.

Use of the product released substantial amounts of 1,2-propanediol, glycerine and nicotine in the air, along with particulate matter PM2.5. The research concluded that e-cigarettes are not emission-free and their pollutants could be a health concern for users and second hand smokers. The researchers suggested e-cigarettes should be officially labeled with appropriate warnings of potential health effects.

Big threat for India
In the absence of regulation, e-cigarettes are becoming increasingly popular in India. A google search for the product returns results showing almost all popular shopping portals selling them. Websites like www.electroniccigarettesreview. in review different e-cigarette brands in India and has buyer guides. The popularity of the product, health experts believe, will adversely impact India that has a sizable young population. Over 55 per cent Indians are less than 25 years of age and extremely susceptible to such products. Realising the potential problem, the World Health Organization called for a declaration to ban e-cigarettes during its Framework Convention on Tobacco Control for South-East Asia Region meet in July, 2013. India participated in it. Eight months on, the Centre is yet to take any action. 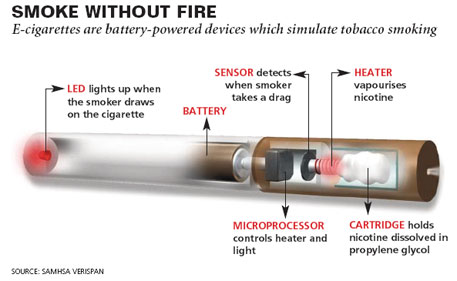 Amal Pushp, director, tobacco control department, Ministry of Health and Family Welfare, says the ministry is considering a decision on e-cigarettes, but admits there has been no significant development.

Punjab was the first state to ban ecigarettes. Through a notification in September 2013, the Punjab State Drug Controller declared e-cigarettes illegal because they contain nicotine, which is an unapproved drug and contravenes the Drugs & Cosmetics Act.

Maharashtra is also planning to ban them.

Health experts suggest that the product should be regulated either by recognising it as a drug or by putting checks similar to that on cigarettes. Pankaj Chaturvedi, associate professor of Tata Memorial Hospital, Mumbai, says e-cigarettes need to be registered with the Drug Controller General of India (DCGI) because they are being sold as a cure for smoking and contain nicotine. The government body, he says, has only approved nicotine lozenges and gums of 2 mg and 4 mg, and nicotine transdermal therapeutic patches. “Its supporters argue that this is the same as nicotine gum, but they need to understand that it needs registration. And once it goes to DCGI for registration, evidences in its favour or against would be discussed,” he says.

Some say manufacturers are taking advantage of the absence of a clear-cut policy on e-cigarettes. “The Cigarettes and other Tobacco Products Act of 2003 does not talk about non-tobacco products. This potentially opens the way for tobacco companies to advertise and distribute e-cigarettes alongside other tobacco products,” says Bhavna Mukhopadhyay, executive director of Voluntary Health Association of India.

Global regulations
Governments world over are considering ways to deal with e-cigarettes, with experts calling for strict regulations and industry lobbies pushing for relaxations.

On September 5, 2013, a group of US Senate Democrats demanded federal probe into the tactics used by the industry to sell e-cigarettes to children. They wrote a letter to the Federal Trade Commission in the light of data released by Centers for Disease Control showing that use of e-cigarettes has more than doubled among middle and high school students since 2011-12. The data showed that around 1.78 million students have used e-cigarettes in the US.

New York banned the use of e-cigarettes at public places in December, 2013. As per media reports, New Jersey, Utah and North Dakota have already banned the product, while Los Angeles and Chicago are considering bans. Even Canada has not approved e-cigarettes.

The UK, which registered e-cigarettes as a drug in June 2013, has been criticised for not properly regulating the product. The British Medical Journal (BMJ) on October 16, 2013, said that the government has allowed different flavours of e-cigarettes, which is one of the major reasons the product attracts children.

The BMJ article has also criticised the government draft which reads it should “ensure that they can be made available as widely as tobacco products”.

Even Glantz, who carried out the research on Korean adolescents, has criticised the UK decision to legalise ecigarettes.

“Amazingly, the amendments justify this give-away to the tobacco companies,” he wrote on the website of CTCRE.

Taking its cue from other countries and research, India should check the ever-increasing popularity of the product before it is too late.

Electronic cigarette use among Korean adolescents: A cross-sectional study of market penetration, dual use, and relationship to quit attempts and former smoking

Perceptions of relative risk of snus and cigarettes among US smokers