In spite of UNESCO warning that temple would be delisted from world heritage sites list, nation's archaeology department says road is lifeline for forest dwellers and cannot be closed without providing alternative 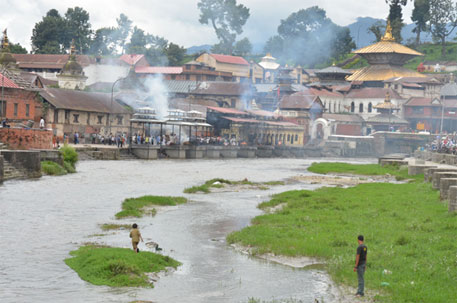 Nepal’s famed Pashupatinath temple may be in danger of losing its World Heritage site status. It was conferred the status in 1979 by the United Nations Educational, Scientific and Cultural Organization (UNESCO).  However, UNESCO has now directed the Department of Archaeology (DoA) of the Nepal government to address three problems related to the temple – the closing of the road through the forest within the temple area, the upcoming crematorium and the non-construction of a compound wall around the temple. DoA has decided to take a pro-community approach to set the problems right.

Closing the road running through Sleshmantak forest in the temple area is not an easy task. The 400 metre track of road has become a lifeline for locals, most of whom are forest dwellers. “We will not close the road till we provide an option to forest dwellers,” said Saubhagya Pradhananga, chief archaeological officer of DoA.

According to department officials, the road has become a necessity for locals who commute on a daily basis. A tripartite meeting with the Pashupatinath Area Development Trust, DoA and locals has been convened to work out a solution.

Chimney height to be reduced

The DoA is also in a quandary over the second objection raised by the UNESCO. In a letter to the department, UNESCO has directed that the 30 metre high chimney of the upcoming crematorium be lowered. According to Besh Narayan Dahal, director general of DoA, senior officials of UNESCO believe the chimney may cause “visual pollution” and ruin the aesthetics of the area.
“The crematorium is a necessity and we are not in favour of shutting it down. But we are taking the advice of technical experts to reduce the height of the chimney,” said Dahal.

UNESCO has given the DoA a time frame of three months to resolve the issues it has raised, after which an inspection team from the world body will arrive in Kathmandu. Officials of DoA said that a tolerant, community-based approach is needed to resolve the problems. The department has written to senior officials of other departments to address the concerns.

The archaeology department of Nepal had been asked to resolve the matter of the road near the temple during UNESCO’s 37th session held in Cambodia from June 16-27 this year. The Pashupatinath temple, dedicated to the Hindu deity Shiva, is one of Nepal’s seven heritage sites. It is one of Nepal’s most sacred Hindu shrines.