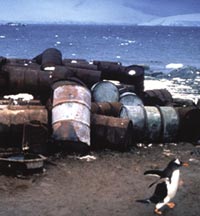 the world's marine policymakers have failed to agree on the details of setting up a process to assess the state of the oceans. At the Global Marine Assessment (gma) International Workshop held from June 7-11, 2004, they deliberated on the scope, framework and funding of the assessment process to pave way for its adaptation at a meeting to be held later in the year.

The gma process was put on the international agenda in 1999 by Iceland. In 2001, the un Environment Programme convened two meetings, during which there was an agreement on the desirability of the assessment. So, at the World Summit on Sustainable Development held in 2002, the international community agreed to create a process under the un by 2004. A group of experts met in March 2004 to examine the elements of the assessment. It was this group's report that the delegates discussed during the workshop.

The divisive issue was whether marine living resources such as fish should be included in the scope of the assessment or not. Australia and Canada strongly supported its inclusion. But countries whose economies are driven by the fishing industry preferred focussing on pollution and the physical degradation of marine environs. This group included the European Union, the Russian Federation, Norway, Iceland and the Republic of Korea. Italy, however, pointed out that the assessment 'must' encompass the effects of pollution on the marine flora and fauna.

The task force will also have to prepare a summary of the scientific work of all intergovernmental regional arrangements and consult with countries and regional organisations to identify where their technical/scientific capacities could be strengthened. Some concerns remain on the use of scientific information; but these have been left for the un General Assembly to resolve at its 59th session.