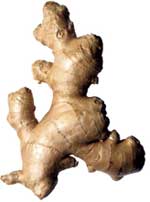 Spice up the meat preparation or get respite from sore throat—ginger is always around to help. Grandmother’s ginger tea for coughs never fails.

In a study published on January 25 in Current Science researchers documented ethno-botanical information on anti-diarrhoeal plants in the Parinche valley near Pune. Out of 182 plants, ginger was extensively used. After consulting ayurvedic doctors, the group tested a solution of ginger powder on mice and cell cultures.

“There was reduction in colonization of epithelial cells which is the foremost step in infectious diarrhoea,” said lead author Poonam Daswani from the Foundation of Medical Research in Mumbai. “Ginger does not show anti-microbial activity. Yet there is decrease in bacterial colonization. It sounds promising, though, clinical trials are mandatory,” said Lisa Rogo from the Columbia University Medical Centre in usa.

“It can be used as a supportive therapy but there may be several causative agents for diarrhoea, knowing which is imperative,” said G C Singhal, former general physician at Ram Manohar Lohia Hospital in New Delhi.