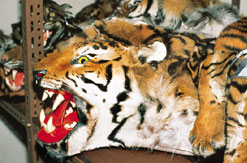 China issued the 'Regulation on Trade in Endangered Species of Wild Fauna and Flora' on September 1, 2006. The regulation bans the import and export of rare animals and plants for commercial use, while making exception for scientific research, cultural exchanges and species propagation. The new law complements the existing law banning trade in tiger bones and their derivatives.

The World Wide Fund for Nature (wwf) has welcomed the move saying the new law will enhance China's ability to combat the import and export of endangered species such as tigers. Experts believe the law will also protect other animals like Tibetan antelopes.

However, Chinese wildlife officials are asking the government to lift the ban and legalise the trade in products made from tiger bones.At a joint meeting prior to the regulation, Conservation International, the International Fund for Animal Welfare, Wildlife Conservation Society, wwf, Save the Tiger Fund and traffic, the wildlife trade-monitoring network, urged the government to resist pressures. There is concern that despite the ban, China's market for animal parts will continue to be a threat. "Any resumption in legal domestic trade of tiger parts could be the final act that drives the tiger towards extinction, and hence it becomes important to keep the ban in place," says Susan Lieberman, director of wwf's Global Species Programme.

Rahul Dutta of wwf India says it is important to ensure that China implements this new law because it may have a bearing on India as well.