MoEF panel recommends opening up to 20 per cent of core tiger habitats in reserves for tourism; earlier guidelines proposed only community-based tourism in such areas 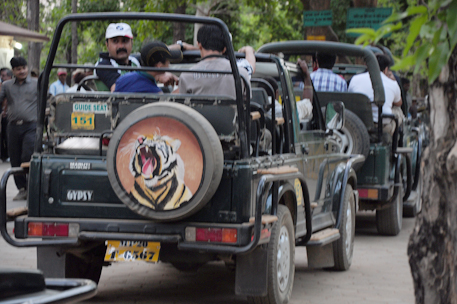 The government is about to finalise the new guidelines for tourism in tiger reserves even though there is no consensus among members of the panel set up to draft them. A few non-official members of the panel have strongly opposed some of the recommendations of the panel that suit the interests of the tourism industry and overlook the rights of  local communities, said sources in the Union Ministry of Environment and Forests (MoEF).

The panel was set up by the ministry on September 12 on the directions of the court. Last month, the ministry withdrew its previous eco-tourism guidelines  that called for phasing tourism out of core tiger habitats, and imposing tax on hotels and resorts for eco-development. The new panel was asked to finalise a fresh set of guidelines by September 22. The panel, which has experts on tiger conservation, tribal rights, tourism and forest officials among its members, has recommended several changes in the previous guidelines, it is learnt.

For instance, while the previous guidelines  called for imposing a 10 per cent cess on the turnover of the hotels and resorts for community development, the new panel has sought to leave it to the state governments to decide the rate of cess. The panel suggests a conservation fee could be charged between Rs 500 to Rs 3,000 per month, per room, depending upon the luxury classification of the tourist facility. Interestingly, the panel recommends that the tourism industry will have a say on how and where the fund thus collected will be utilised. This has not gone down well with a few non-official members of the panel who said this would lead to misuse of the fund by industry. They demanded that the power to decide utilisation of conservation fund should only be with the Tiger Conservation Foundations and the gram sabhas.

The panel has recommended that up to 20 per cent area of the core zones of the tiger reserves could be opened up for tourism. The earlier guidelines called for allowing only community-based tourism in 10 to 20 per cent of the core zones, depending on the size of the zones. The panel says in its recommendations that in the tiger zones where only tourist visits are permitted and there is no consumption of resources, tigers' density and recruitment does not seem to be impacted. A few of the members have reportedly questioned the scientific basis of this argument. There were questions raised on why non-consumptive tourism should be allowed in tiger reserves, but not consumptive uses by forest dwellers, especially when the rights of the forest dwellers are protected by the Wildlife Protection Act and the Forest Rights Act.

The panel also recommends that every tiger reserve should have a tiger conservation plan which should include identification of corridor connectivity and important wildlife habitats and mechanisms to secure them. The dissenting members are said to have demanded that legal provisions, separate from the tourism guidelines, should be drafted to implement this process. They feared absence of clear guidelines will lead to harrasment of local communities as has been happening in the wake of notification of buffer zones. On April 3, the court had given a deadline of three weeks to the government to notify buffer zones around all the tiger reserves. This led to rushed up notifications of buffer zones and there were complaints that gram sabhas were not consulted while issuing such notifications as mandated by law.

The new panel was also supposed to address the issue of illegal notification of core and buffer zones in tiger reserves where the legal process of consultations have reportedly not been followed. The panel, it is said, has not touched upon this issue comprehensively. According to sources, the dissenting members have sent a dissent note to Rajesh Gopal, member secretary of the National Tiger Conservation Authority and convener of the panel. Gopal told Down To Earth that the committee has submitted its recommendations to the authority, which is now processing it. It remains to be seen to what extent these disagreements will be reconciled in the final draft of the guidelines that will be submitted to the apex court on the next hearing on August 27.