The Central Electricity Regulatory Commission (CERC) recently went public with its proposed terms and conditions for determining electricity tariffs to be  paid to renewable energy power producers. A public hearing on the draft regulations was held in December last where stakeholders submitted their objections and suggestions. The regulations, which will replace the regulations that expire this year, will be valid for the next five years, starting April 1.

The regulations contain various components and factors that will be considered for determining electricity tariff for power producers using different renewable energy sources. These include factors like capital cost for producing energy, operations and maintenance and capacity utilisation (see tables: 'CERC benchmarks for components for determining tariff'). Due to varying capital costs, the overall cost of producing electricity using renewable energy sources is unique for each technology. Therefore, these regulations tend to be technology-specific. The tariff determined through these guidelines are also used for the reverse bidding process in the Jawaharlal Nehru National Solar Mission. 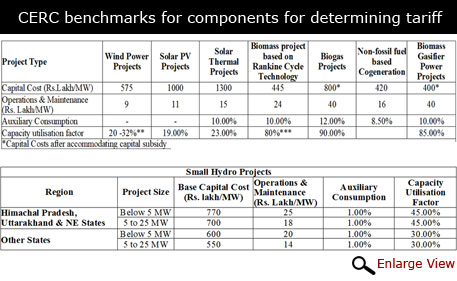 (Explanatory note: Capital costs mentioned in the table refer to input costs like equipment and land. Auxiliary consumption by the power plants refers to  energy consumed by auxiliary equipment of the power plant and transformer losses within the generating station expressed as a percentage of the electricity generated by the actual power plant. Capacity utilisation factor refers to the actual generation of a power plant as against its installed capacity. These values have been benchmarked by CERC to determine the tariffs a power producer would get for producing a unit of electricity.)

CERC has further specified the period during which the tariffs determined through these guidelines would last. This is termed as tariff period (see table: 'Tariff period for power from different renewable energy sources').

The tariff period for wind power projects and small hydro projects (less than 5 MW) has been set below the useful life of the plant. According to Prayas Energy Group, a Pune non-profit, it is important that the tariff period equals the useful life of plant. This would be far more cost effective to consumers. A Prayas official explained that if the life of the plant is 10 years and the producer has to recover certain amount of profit on investment, then it would pinch the consumers less if the money to be recovered from them is staggered over a ten-year period rather than say five years.

During the public hearing, most stakeholders in the wind power industry suggested a higher capital cost per mega watt of electricity through wind power. But Prayas suggested that “significant cost reduction can be achieved through competitive bidding in large orders for power utilities; if there is competition, companies will try their best to cut down on costs to make higher profits as has been seen in the solar energy sector. This is due to the fact that wind turbines can be more efficient depending on technology, hub heights and location. Wind tariffs should be adjusted to actual field performance rather than assuming specific cost components, performance indicators like capacity utilisation factors, say experts.

In the solar photo voltaic (PV) segment, the module costs have decreased significantly, which CERC has taken into consideration and has resulted in low capital costs. However, SDS Solar Private Limited, a solar power producer, contended during public hearing that only module costs have gone down whereas the non-module costs have gone up. Many other stakeholders suggested an increase in capital cost component, ranging from Rs 1,100 lakh per MW to Rs 1,300 lakh per MW in the solar PV segment as against the price of Rs 1,000 per MW contained in the draft regulations.

Similar demands were heard from energy producers using biomass. Ankur Scientific Energy Technologies Pvt Ltd and GE Energy suggested that the capital costs should be pegged at minimum Rs 6 crore per MW for biomass gasifier power projects as against Rs 4 crore provided in the regulations.