A new species of snake that mainly inhabits the Western Ghats has been identified. Named Dendrelaphis girii, the reptile was first spotted in Amboli village in Sindhudurg district of Maharashtra in 2001 by a group of nature enthusiasts. It was then identified as snake belonging to the genus Dendrelaphis bifrenalis, a species from Sri Lanka.

Two years later, Varad Giri, deputy director and curator of the herpetological collection with the Bombay Natural History Society (BNHS) saw a similar snake during his visit to Goa and took a specimen for further studies. He, too, identified it as a snake belonging to Dendrelaphis bifrenal genus.

It was only in 2009 when Gernot Vogel, an expert on snake taxonomy from Germany, visited BNHS to study snake specimen it was noted that the snake is a new species. 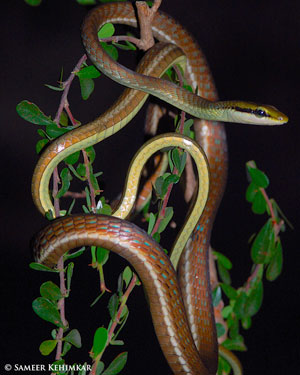 “The snakes of the genus Dendrelaphis are widely distributed in northwestern Pakistan, east and southern parts of Australia and southern China. “They are commonly called bronzeback tree snakes. These snakes are mostly arboreal and have predominantly bronze colouration.

When they are aggressive they expand their skin and a blue coloured skin in between the scales is visible. In India, there are about ten species of Dendrelaphis known from across the mainland and
islands,” says Giri.

This new species has a black coloured stripe behind the eye which barely extends to the neck. It has been named after Giri. The findings were published in the December 20 issue of Taprobanica.