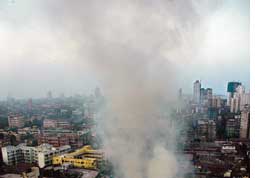 until now, it was believed that methane, from cattle dung and paddy cultivation, was the second biggest contributor to global warming after carbon dioxide. A recent review says soot is the second biggest contributor. Soot has 60 per cent of the effect of carbon dioxide on global warming, and China and India contribute 25-35 per cent of the total soot emissions, the paper says.

Soot, also called black carbon, is primarily produced from the burning of biomass such as fuelwood, cow dung, agricultural waste and coal, and from diesel exhaust; it is the reason behind many health complications. About 80 per cent of rural households in India use fuelwood for cooking. The paper says mitigation methods, involving use of solar cookers, will take care of the cooking needs and reduce carbon emissions.

The review, published in the April issue of Nature Geoscience, analyzes existing literature on observational and computer simulation data related to climate change. It says these studies have limitations. First, they fail to assess the role of soot in atmospheric brown clouds that are a mixture of anthropogenic pollutants--sulphates, nitrates, fly ash, dust and soot--and sea salts and mineral dust. The studies do not include the fact that soot is mixed with sulphates and other pollutants, which doubles the warming effect.

Second, computer models assumed soot concentrations were near the surface of the earth. But soot is concentrated at altitudes of about two kilometres above the earth's surface, where it absorbs direct sunlight. This temperature rise at higher altitude may have caused glaciers in the Himalayas to melt.

Third, simulation models did not consider that biomass burning contributes to 40 per cent of soot emissions worldwide. The review says developing countries in the tropics and East Asia have replaced countries in North America and Western Europe, the major soot emitters of the 1950s. Soot and brown cloud also affect monsoon significantly, the paper says.

Jayaraman Srinivasan, professor at the Indian Institute of Science, Bangalore, says the review's conclusions must be substantiated. "The author's findings on the soot and the Himalayan glacial melt theory have not been demonstrated by any measurements," he says. "Soot's impact on tropical climate is very complex, our understanding of which is poor. One cannot be confident about predictions," he adds.


"Estimates say solid fuel use causes over 440,000 deaths in children under five years; 34,000 cases of chronic respiratory disease in women under 45 years, and 800 cases of lung cancer every year," says Kalpana Balakrishnan, professor, Sri Ramachandra Medical College and Research Institute, Chennai. Srinivasan says the emission of soot should be reduced in India primarily because of its impact on health and agriculture. These impacts are understood much better than the impact of soot on our climate.

V Ramanathan, professor at the Scripps Institution of Oceanography, San Diego, usa, and the lead author of the review, too stressed on health. "Mitigation measures will lead to immediate reduction in soot levels,which will help check its adverse impact on health," he says.

Ramanathan and Balakrishnan have proposed a venture called Project Surya, which will involve use of solar cookers and bio and natural gas for cooking. "We have chosen Mukteshwar in Uttarakhand and Lucknow in Uttar Pradesh because these are the two most vulnerable regions. It will cost about us $4.5 million per location of about 15,000 people," says Ramanathan. The project will also document the mitigation process.

While the project may be successful in reducing soot emissions it is applicable only to India and the South Asian region where biomass burning is the major source of black carbon. Other regions will require appropriate technologies to reduce soot emissions depending on their source. "For China, the focus should be reduction in coal emissions of black carbon while in the us and Europe, the focus should be on diesel emissions," says Ramanathan.

The choice of technologies for the project will be net carbon negative, says Ajay Chandak, project collaborator. He, however, has his doubts about the project.

"Solar cookers cannot fulfil cooking requirements completely. It needs to be supplemented by other means. We suggested biogas plants in the plains. But they won't work at higher altitudes. Perhaps, other options like efficient stoves and new designs of wood gasifiers could help," says Chandak.