A contagious disease, similar to rinderpest and first observed in the Ivory Coast in 1940, has surfaced among sheep and goats in south India 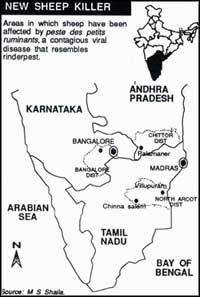 SCIENTISTS have found that several sheep in south India, which were thought to be suffering from rinderpest are actually infected with peste des petits ruminants (PPR), a new viral disease hitherto thought to be restricted to West Africa.

Rinderpest usually afflicts Indian cattle, wild Indian bison and smaller ruminants such as sheep and goats. PPR is found more often among goats and sheep, and is caused by a virus that closely resembles the rinderpest virus. PPR-infected animals suffer from ulcers in the respiratory tract, high fever, diarrhoea and eventually die. In India, so far, PPR has affected only sheep.

The PPR outbreak in India was first reported in 1989 by M S Shaila of the department of microbiology and cell biology at Bangalore's Indian Institute of Science, when about 80 sheep in a flock of 800 at Arasur village in Villupurum district of Tamil Nadu were affected. Last year, PPR outbreaks were reported and confirmed from Karnataka, Tamil Nadu and Andhra Pradesh, says the scientist.

Shaila and her collaborators from the Madras Veterinary College used special diagnostic probes to identify the PPR virus, which are usually difficult to tell apart from the rinderpest virus.

Experiments have shown that vaccinating goats and sheep against rinderpest can protect them against PPR, too. However, according to Shaila, it is not known how effective the immunity provided by the rinderpest vaccination will be in the long run. She explains, "This is a new disease in India and efforts must be made to ensure that it does not spread to other parts of the country."