New York to get its first public toilets 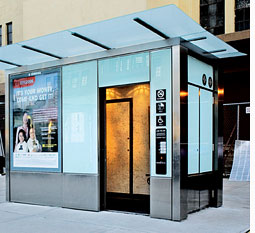 new York City is geared up for its first 20 public toilets. The self-washing and wheelchair-accessible toilets are expected to come up in December 2007 at Madison Square Park, Manhattan. It will cost users 25 cents for 15 minutes of use before the doors will open automatically, and a one-minute automatic cleaning cycle after each use. The venture is part of a 20-year contract with Cemusa Inc, a Spanish advertising firm. The project, which utilizes tempered glass and stainless steel structures designed by the New York architecture firm Grimshaw Architects, is expected to gross the city us $1.4 billion in funds and advertising space over 20 years.

In the early 1900s, the city had accepted the need for public toilets in parks. Around 145 opened in 1934. The subway system also offered accessible restrooms. By 1940, subway stations offered 1,676 public toilets that were inspected weekly. But in the middle of the 20th century, the condition of the city's toilets plummeted due to vandalism and neglect. Currently, there are about 1,100 comfort stations available in the city's 1,500 parks, according to the Parks Department. Of the 468 subway stations in the city, there are only 78 restrooms available to the public.