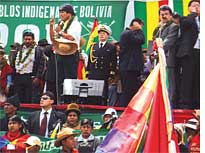 The land reform plan was aimed at preventing a minority of wealthy estate owners, mostly in eastern lowlands, from further consolidating rural property. Social movements have long demanded redistribution of these large estates. However, activists termed the plan a "compromised document" for it exempts existing landholders from the cap. In Bolivia, the second poorest country in South America, just 100 families own 25 million hectares (ha), while two million peasants possess only five million ha, according to the UN Development Programme.

Recognizing self-governance of 36 indigenous communities, the new constitution allows them to pass their own laws and levy taxes. It also recognizes their practice of "community justice" based on traditional customs. The charter sets a quota of seats for minority indigenous groups in the Congress.

clinical trial
Pfizer will be tried in the US

A US court of appeals revived two lawsuits brought against Pfizer by Nigerians families who allege the US-based pharma giant used their children in a controversial clinical trial. A lower court had dismissed the cases saying they should be heard in Nigeria, not in the US.

The families allege that Pfizer violated international law by illegally testing its drug Trovafloxacin Mesylate (Trovan) on 200 sick children during a meningitis outbreak in 1996. Eleven children died during the clinical trial, while others developed brain damage and arthritis. In a separate legal action, the Nigerian government has also sued Pfizer for Trovan testing and is seeking US $8 billion in damages. The US does not approve the use of Trovan by children, while the EU has banned the drug.

The new school term in Zimbabwe started on January 27. But there were no teachers to teach the pupils.

Zimbabwean teachers remained on strike demanding the payment of salaries in foreign currency because ever-increasing inflation rates made their salaries negligible. Teachers, some of whom have been on strike since early 2008, say they will not return to work unless paid US $2,300 a month. Currently, they receive Z $70 trillion a month, which comes to US $3. The opening of schools had been delayed by a week after teachers refused to mark the 2008 examinations. Even if schools reopen soon, students will not be able graduate to the next standard without the results. The country's current inflation rate is 231 million per cent per year.

It was a rare occasion at Dugong Creek, a settlement of the Onge, one of the oldest groups of hunter-gatherers on the Andaman and Nicobar Islands. Government officials persuaded four male members of the tribe to marry four widows who lost their spouses in December 2008.

The men died after consuming spurious liquid which they mistook for alcohol. The tribe has a population of 93, including 24 adult males and 32

females. "Our objective was to rescue the dwindling population of this tribe, while giving the young widows, who have infants, an opportunity of having life partners," said officials of the Andaman Adim Janjati Vikas Samity (aajvs), an autonomous body for the welfare of primitive tribes in the union territory. The decision was taken after consulting the Onge tribal chiefs. aajvs plans to organize similar weddings of three more widows and one unmarried girl. "We are looking for an appropriate match," they said. 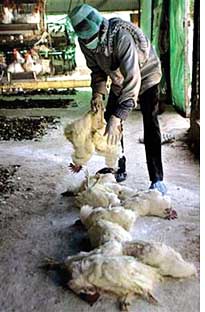 Authorities have culled 4,000 chickens in Sikkim since it declared a bird flu outbreak in mid-January. The infection was first reported in Ravangla municipality area where 36 dead birds tested positive for H5N1 virus. Officials say this could be a case of lateral infection as the site is close to Siliguri, in West Bengal, which has been grappling with intermittent bird flu outbreaks since 2007. Following Assam and West Bengal, Sikkim is the third state to report bird flu outbreak this winter, the peak season for the flu.

To provide clean drinking water to 60 million rural residents by the end of 2009, China plans to repair over 6,000 reservoirs and upgrade irrigation facilities across the country. Currently, more than 200 million Chinese do not have access to safe drinking water. The World Bank had recently warned that "the rising water demand and deteriorating water quality from widespread pollution suggests that a severe water scarcity crisis is emerging in China". Meanwhile, the government has declared drought in northern and central China. 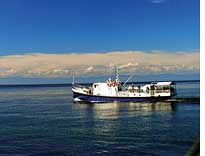 Lake Baikal, the world's deepest and oldest lake, is threatened by a zinc mine in Russia. The Kholodninskoye deposit, which sits in a watershed flowing into Baikal, is the third largest lead and zinc field on earth holding an estimated 13.3 million tonnes of zinc and two million tonnes of lead. mbc Resources, a subsidiary of Russia's privately-owned Metropol group, recently obtained a licence to develop Kholodninskoye. Environmentalists say wastes from the mine would poison the lake, already threatened by tourism and industries. In July 2008, Russia's natural resources ministry proposed a ban on developing Kholodninskoye. But Buryatia, a member state of the Russian Federation, which borders 60 per cent of the lake, opposes the ban saying the mine will bring investment and jobs to the region.

Dubbed the Blue Eye of Siberia, Baikal is home to more than 1,700 species of plants and animals, two thirds of which cannot be found anywhere else in the world. It was declared a Unesco World Heritage Site in 1996.

After Uruguay, neighbouring Argentina also declared an agricultural emergency. The government said the country is facing the worst drought in 100 years.

The farming sector stands to lose US $5 billion this year, which is a big blow to the economy of Argentina--a top exporter of soy, corn, wheat and beef. The drought has especially hit the entire 600,000 sq km pampas grasslands region, considered one of the most fertile areas in the world. The National Farm Emergency Commission said an unusually hot summer in the southern hemisphere and below-normal levels of rainfall has led to the drought. The government has released US $66 million in farm subsidies, reduced export taxes on wheat, corn, fruits and vegetables, and suspended the minimum weight for slaughtering livestock so that ranchers can sell cattle before they starve.

A plague of armyworms that has destroyed crops in more than 100 villages in northern Liberia, affecting over 500,000 people, could spread across much of West Africa by the end of February, said the un Food and Agriculture Organization (fao).

On January 26, Liberian President Ellen Johnson-Sirleaf called it the worst infestation in 30 years and declared national emergency. He appealed for international help to carry out aerial spraying of insecticides. However, three days later, fao representative in Liberia, Winfred Hammond, said it is too late to prevent the spread of the insects. "Aerial spraying may not be of much help since many armyworms have bored into the ground and formed cocoons." Hammond warned the situation would get worse when the armyworms re-emerge after a week or 12 days. The moths can fly up to 1,000 km, invading newer areas. With each female laying up to 1,000 eggs, the hatched larvae can devour an entire crop in 48 hours. While the spraying is on, fao's entomologist team plans to set up pheromone traps against male moths. The government is supplying food and water in the affected areas where the caterpillars have fouled all open water sources with their faeces. "The situation is alarming because Liberia is one of the most food-insecure countries," said Hammond.