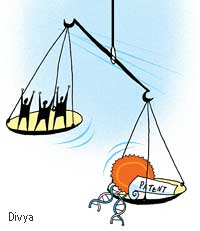 About 100,000 cancer patients, doctors, researchers and lawyers sued the US government for granting patents for two human genes. They said the patents deny women with breast and ovarian cancer the benefit of new tests and possible treatment. A company or an institution that owns patents for genes has specific rights to their use, which may include diagnostic tests based on those genes, as well as future mutations that are discovered. In 1994, the US Patent and Trademark Office (pto) granted rights for the two human genes-- brca 1 and brca 2 that help detect if a person has risk of breast or ovarian cancer--to Utah university. The university signed an agreement with Myriad Genetics, a Utah-based company, giving it right to market the diagnostic tests.The groups have also sued the university, Myriad Genetics and pto. The lawsuit poses public policy questions about patenting a part of the human body.

The government of La Gloria, pig-farming village in Mexico, plans to erect a statue of five-year-old Edgar Herna-ndez. He is believed to be the first human to have contracted swine flu. Hernandez survived the virus AH1N1, but La Gloria became the epicentre of the outbreak. By May end, it had killed 91 people, 80 from Mexico, and infected 12,500 across the globe. The government said the statue would be dedicated to those who died in the outbreak.

The Pontifical Academy of Sciences, Vatican's think-tank, held a week-long closed-door debate on Transgenic Plants for Food Security in the Context of Development. Anti-GM groups alleged the academy, in the garb of a debate, launched a promotional campaign on gm food. Several green groups also staged protests and sit-ins. All the 40 people invited for the debate either worked for biotech giant Monsanto or worked for companies funded by Monsanto, said Spinwatch, a non-profit that monitors the role of industrial public relations. Chancellor of the academy Marcelo Sanchez Sorondo said the debate was in search of scientific clarity. Last year Pope Benedict xvi declared GM organisms a modern-day sin.

Brazilian search planes found a strip of wreckage in the Atlantic Ocean, which officials said could be from the missing Air France flight from Rio de Janeiro to Paris. The jet disappeared over the Atlantic Ocean during a thunderstorm on June 1, with 228 passengers and crew on board. The cause of the crash will not be known until the black boxes are recovered, which may take some weeks; aviation experts say a collision with an Atlantic storm, with wind speed of 160 km per hour, could have led to the technical failure. Fierce Atlantic storms are common this time of the year near the equator.

UN's Office on Drugs and Crime (odc) said manual eradication of opium-poppy in Taliban-dominated southern Afghanistan is failing. Last year military forces could destroy only 3.5 per cent of the country's 157,000 hectares of poppy. Afghanistan produces 90 per cent of the world's opium.Head of the odc, Antonio Maria, said a crackdown on drug mafia and smuggling would create a flood of drugs in the domestic market, driving down drug prices. This would force poppy farmers to switch to legal crops, he said. The plan could be difficult to implement given Afghanistan's porous border and smugglers who are better armed than border guards.

With Israel refusing to allow building material across the border to the Gaza Strip, a Palestine territory controlled by the Hamas militants, several Gazans have resorted to mud-brick buildings. The government has also sanctioned a three-storey mud-brick building for a children's charity. Gaza's deputy prime minister Ziad al-Zaza said the construction site will act as a classroom for those who want to learn about mud-brick houses. The idea to rebuild Gaza despite sanctions is catching on. Minister for public works and housing Yousef Al-Mansi recently said his ministry plans to build a school, a mosque and a clinic out of recycled rubble from bombed buildings. Only two trucks carrying building material have been allowed into Gaza since January 18, when Israel ended its military assault on Gaza. Over 25,000 buildings were destroyed.

In early May, the governments of Argentina and Chile gave their final nod to Barrick Gold for mining gold and silver at 4,000 metres altitude in the Andes mountains. The world's first bi-national mining project, Pascua Lama, straddles the Chile-Argentina border. A week after the nod, Chile's environment minister said the country's water authorities are still studying Barrick's proposal and are yet to give it clearance. This has riled the activists who said the minister's statement suggested the project was never evaluated as a whole. Activists, who have been opposing the project since Barrick proposed it 15 years ago, fear the open-pit mine will pollute water sources in arid northern Chile, which has 75 per cent of the mineral. The mine is feared to affect glaciers on the Andes.

climate change
US to go slow on emission cuts

Domestic politics will not allow the US to deepen its commitment to cut greenhouse gas (ghg) emissions over the next decade despite growing international pressure, Washington's top climate negotiator Todd Stern said. He was speaking at a meeting of Major Economies Forum on Energy and Climate (mef) held in Paris. "We are jumping as high as the political system will tolerate," Stern said, rejecting China's call for rich nations to slash ghg emissions by 40 per cent before 2020, compared to 1990 levels. US President Barack Obama plans to cut emissions by six per cent, he said. Stern's stand, however, did not go down well with EU nations who have committed to a 20 per cent reduction by 2020. France's environment minister, Jean-Louis Borloo, said, "The US will have to do more." Stern cautioned pushing for deeper cuts in the US could backfire.

After repeated persuasion by the government, Peru's indigenous leaders agreed to stop the two-month-long riot in the Amazon region. But they threatened a nationwide strike if the government did not roll back decrees allowing multinational companies to mine and log in their ancestral land. Peru's ombudsman office, which investigates people's complaints against the government, has assured the Inter Ethnics Association for the Development of the Peruvian Jungle, or Aidesep, that it would study implications of the decrees carefully. Indigenous leader Alberto Pizango, however, said they would not retreat from their demands. "If Peru's Constitutional Court does not declare the decrees unconstitutional, we will appeal to the Inter-American Court of Human Rights," Pizango said.

Russia opened a plant deep in Siberia's Ural mountains to destroy 45 per cent of its chemical weapons by the end of the year. Industry Minister Viktor Khristenko said the plant would destroy 5,500 tonnes of chemical weapons, including nerve gases VX and Sarin. The toxic agents will be neutralized and turned to bitumen salt mass before sending them for long-term storage in concrete-lined subterranean bunkers.

Australia's federal government sealed the biggest water buy-back deal, snaring irrigation licences for 240 billion litres of water a year from a group of farmers in New South Wales. The move is part of an effort to save Murray-Darling, the country's largest river system that is at a historic low due to over-allocation of irrigation licences and decades of drought. The Opposition ridiculed the move saying the Kevin Rudd government is buying "phantom water". In the face of drought, less than 20 per cent of the irrigation licences bought will actually make its way back into the river system. It has demanded that the federal government should instead improve irrigation infrastructure.