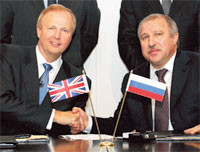 After its failure to impress Greenland, energy giant British Petroleum has struck a deal with Russia’s state-run company Rosneft to explore 125,000 square km in the Russian Arctic.

Last year Greenland had denied BP an Arctic drilling license citing the Gulf of Mexico oil spill, one of the worst environmental disasters in US history. The US has called for an inquiry into the deal on national safety grounds to know Russia’s global oil ambitions.

Known to contain threefourths of the world's untapped reserves of oil and natural gas, the Arctic is currently at the centre of an oil rush due to melting of ice because of global warming. Besides Russia, Canada, Denmark, Norway and the US want to control the vast reserves.

Botswana has given its green signal to a US $3 billion diamond mine in a national park, home to the Kalahari Bushmen. Gem Diamonds, the British company, says it has secured the Bushmen’s consent, a claim which the indigenous people reject.

The government has repeatedly evicted the Bushmen from their ancestral lands inside the Central Kalahari Game Reserve since 2002. Those who resisted were barred from using a well inside the reserve. Without the access, they have to travel hundreds of kilometres to fetch water.

The Bushmen recently filed an appeal in the International Court to allow them to use the well.

In a bid to wipe out foot and mouth disease (FMD) from South Korea, the government has announced it will vaccinate pigs and cows. Although vaccination is expensive and would delay the country’s chances of regaining FMD-free status from the Paris-based World Organization for Animal Health, South Korea said it wants to protect the clovenhooved animals.

FMD-free countries have good access to export markets. The decision comes after officials were forced to order culling of 2.1 million livestock at an estimated cost of US $1.78 billion. Culling is a temporary solution to fight an outbreak.

About a million animals have been culled, with some buried alive in the country’s worst outbreak of the highly contagious disease that began in November last year. South Korea has also confirmed spread of avian flu, with 3.57 million birds being ordered culled. 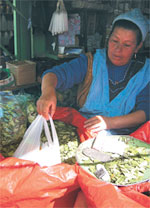 Bolivia has launched a fizzy drink made from coca plant, in an attempt to end an international ban on chewing the leaf. Called Coca Brynco, the drink is intended to rival Coca Cola and boost the production of Bolivia’s staple crop.

The Latin American country wants to overturn a UN convention that bans chewing coca, used in the Andes for years as a mild stimulant and herbal medicine. It is also used to make illegal cocaine. Spain has supported the campaign. The US, the world’s largest cocaine consumer, opposed the move. Bolivia is the world's third biggest coca producer after Colombia and Peru. 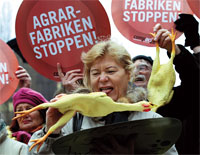 German authorities have destroyed around 100,000 eggs, slaughtered thousands of pigs and banned 4,700 poultry farms from selling their products after a cancercausing chemical was found in livestock feed.

On January 3, feed tainted with dioxin was fed across the country to hens and pigs, contaminating eggs, poultry meat and pork. Tests revealed levels of dioxin were 77 times above the permitted level.

Officials suspect a north German firm may have supplied 3,000 tonnes of fatty acids meant for industrial uses, such as paper, to makers of the animal feed. For feed, only animal fat or vegetable fat can be used. South Korea and China have banned German pork imports.

In the wake of high global soybean demand, Romanian farmers have urged the EU to allow growing of genetically modified (GM) soybean. Valeriu Tabara, the country’s agriculture minister, said, “We are the only country in Europe that has good conditions for this crop.” Romania banned GM soybean in 2007 after entering the EU.

Romanian farm producers said the 27-nation bloc is hindering the continent’s economic prosperity due to absence of new technologies. The EU imports 90 per cent of the total soy requirement, and 40 million tonnes of GM soybeans. Global demand for soybean surged in recent weeks as drought in Argentina, floods in Australia and lower estimates of US grains indicated shortfalls in supplies.

The EU has decided to block fishing vessels from Iceland carrying mackerel from landings at its ports over a dispute on fishing quotas. Iceland’s decision to raise its mackerel quotas last year has brought it into conflict with the UK and Norway, threatening the island nation’s bid to join the EU.

The island unilaterally set its mackerel catch quota for 2011 at 147,000 tonnes. The EU says the quota will hurt Scotland’s fishing industry. Mackerel is the Scottish fishing fleet’s most lucrative stock.

Last month, Iceland criticised the EU and Norway for jointly setting mackerel catch quota for 2011 at 583,882 tonnes, the maximum amount that scientists say is ecologically safe. Iceland wants to join the bloc for financial security after the collapse of its banking system in 2008.

The UN has urged Nigeria to clean its villages and limit gold ore-processing after lead poisoning outbreak killed more than 400 children in 2010. About 18,000 people were affected by the poisoning due to illegal gold mining in northern Nigeria.

A recent UN study found high levels of lead in the area’s drinking water. In 2010, the country banned processing of ore for gold mining when high levels of lead were found in Zamfara state. Residents flouted the ban, concealed illnesses from lead poisoning due to fear that authorities would ban their mining activities.

They also confined ore processing activities to their homes, which increased the risk of children being poisoned. Lead exposure can cause irreparable damage to the nervous and reproductive systems.

A Russian waterworks facility has recruited giant African snails to monitor air pollution from a sewage incinerator. Fitted with heart monitors and motion sensors, the snails will help researchers take readings and determine pollution levels in the air coming from the incinerator that burns sewage residue on the outskirts of St Petersburg.

The Achatina snails, which reach 20 centimetres in length and are widespread in Sub-Saharan Africa, were selected because they have lungs and breathe air like humans.

Brazil has approved a hydroelectric energy dam in the Amazon, despite issuing an order restricting entry to the site citing presence of uncontacted tribes. Environmentalists say if built, the 11,000 MW Belo Monte dam would flood the area, devastate the rainforest and reduce fish stocks which the tribes rely for survival. Belo Monte could supply six per cent of the country’s electricity needs by 2014, the year Brazil will host soccer’s World Cup.