NGT forbids factories in Jasodharpur from dumping waste in river 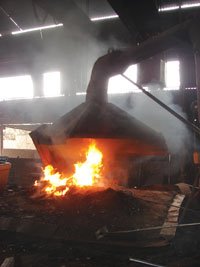 Residents suffering from pollution caused by Jasodharpur Industrial Area (JIA) near Kotdwar town in Uttarakhand’s Pauri Garhwal district have something to cheer about. The central bench of the National Green Tribunal (NGT) on Tuesday noted serious violations of air and water pollution norms by companies operating in the area and has ordered a site inspection. The bench also rapped the state pollution control board (SPCB) for failing to monitor and curb pollution in the area.

Observing abysmal pollution monitoring in the industrial cluster,  NGT ordered members of Central Pollution Control Board (CPCB) and the SPCB to undertake site inspection. The team chaired by an environmental engineer of CPCB, is supposed to conduct surprise inspection of all 18 operating foundry units in that area which are alleged to cause serious pollution. The committee has been asked particularly to look at stack emissions, ambient air quality and slag management and disposal by the industrial units.

The order came in response to a petition by Shiv Prasad Dabral, a resident of the area, who alleged that several foundries in JIA are operating illegally, without consents from SPCB. These industries are also major sources of air pollution in the area and are a public health hazard. The units have also been flouting industrial pollutant discharge norms by dumping the foundry slag on the banks of the Sigaddi Srot river, notes the petition. People living around the industrial area have been protesting against the pollution caused by industrial units since 2008.

This is the second order that the tribunal has given to address the concerns raised by the petitioner. In an order given in February earlier this year, NGT had directed the Uttarakhand Environment Protection and Pollution Control Board (UEPPCB) to close all industrial units in Jasodharpur Industrial Area (JIA) that are functioning without the consent of the board. A probe is on in the matter. Counsel for the applicant, Sanjay Upadhyay, in his submission to the tribunal,  pointed that only 10 of the 18 foundry units have consent to operate till 2014-2015, while the other eight have not been granted consents and as of now their applications are pending before the SPCB for consideration.

The arguments raised before the tribunal follow the findings of Delhi-based non-profit Centre for Science and Environment (CSE) regarding industrial units in JIA. An Environment Impact Assessment (EIA) study of JIA, conducted by CSE in 2012, had confirmed illegalities and environmental violations in the area. The study was initiated following the request of UEPPCB in December, 2011, that came as response to the demands of people living around the industrial cluster.

In its findings, CSE expressed concern over the fact that UEPPCB did not give consent to several factories in JIA, but still allowed them to operate. The study also found that the pollution control equipment used in these factories was highly inadequate and was resulting in massive pollution. Unplanned slag disposal on the bank of a river was also identified as a major problem.

The bench took a strong stand against the alleged slag dumping in the riverbed. Going by the principle of “polluter pays”, the bench has directed the superintendent of police of the concerned districts and the deputy commissioner to ensure that whatever slag has been dumped in the riverbed must be removed at the cost of the industries. In case industries refuse to pay for the clean up, they will be shut down.

Besides removal, industries operating in the area have been asked to store the slag generated by them in their premises and not dispose slag, waste or industrial effluents into the river.

“The order of the tribunal is an important step towards regulating such practices,” says Upadhayay. The counsel had recently visited Jasodharapur area and submitted photographs of the current status of industrial operations to the tribunal.

The inspection report of the committee is to be submitted to the tribunal a week before the next date of hearing. The matter is to be next taken up on August 20 now.