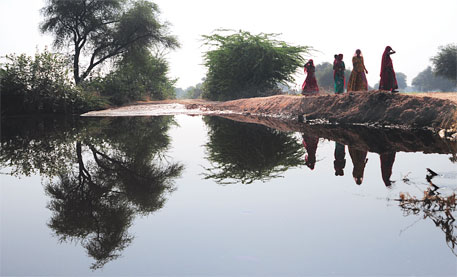 The Central bench of National Green Tribunal, while hearing a case on the discharge of untreated effluent from several industrial areas in Jodhpur, Rajasthan, has ordered the state authorities to formulate an action plan to achieve zero discharge by the end of this month. The industrial areas were developed by the Rajasthan State Industrial Development and Investment Corporation Limited.

The bench also imposed a fine of Rs 5 lakh each (based on “polluter pays principle”) on all industries operating  without consent of the state pollution control board (SPCB). This includes 138 textile units in the industrial areas. The court has also given several other directions to the industries and the state authorities.

Jodhpur has about 17 industrial clusters. “More than 212 textile units, 109 steel rolling mills are operating in heavy industrial areas of Jodhpur,” says Sharad Saxena, assistant environmental engineer with Jodhpur regional office of Rajasthan SPCB. “However, the recent NGT order was for industries in about four-five industrial clusters. These clusters are located nearby and share a common common effluent treatment plant. From 2007 to 2013, we have issued closure notices to about 125 units in these areas which were operating without proper consent to curb pollution in the Jojari river. But these units went to the high court. The court transferred the list to the NGT,” added Saxena.

Industrialists argued before NGT that they submitted the necessary documents to the Jodhpur Pradushan Nivaran Trust, sole operator of the common effluent treatment plant (CETP) in the area, to treat their discharge. But the trust authorities arbitrarily rejected the applications or never replied to the applications and so the pollution control board authorities who came for inspection of the units directed closure. The industrialists also claim that they submitted the necessary documents for both consent and for seeking connection with the CETP, but since the authorities never replied, as per Section 25 (7) of the Water Act of 1972, the industrialists assumed they have received a clearance. Section 25 (7) of the Water Act,1972, says that if the state authorities fail to give a reply for more than four months after submission of proper application, complete in all respects, it is deemed  the applicant has been granted an unconditional consent.

However, the court while hearing the case observed that the industrialists have not submitted proper documents and, hence, the provisions do not apply to them. The court, after imposing a fine of Rs 5 lakh on these units, asked them to also file fresh applications with the boards for consent. The pollution board was asked to respond to these applications by six weeks.
Textile and steel units constitute more than 80 per cent of the industrial units in the area. The industries cause heavy water pollution. To treat the effluent from these industries, the area has a CETP with a capacity of 20 million litres per day (MLD). The CETP has both acidic effluent and alkaline effluent treating facilities. Presently, the CETP has 212 members from the textile industry who are discharging 11.851 MLD alkaline effluents, while the steel industries are discharging 3.15 MLD acidic effluents.

The court observed that nearly 37.2 MLD of effluent reaches the CETP every day and more than 50 per cent of this goes untreated into Jojari, a tributary of the Luni river in Rajasthan. Jodhpur, Pali, Balotra, Jasol and Bituja are the major clusters of small scale industries engaged in printing and dyeing of low cost fabric in the state are along the Luni river.

It is to be noted that in December last year, petitions were filed at the NGT by residents of Jodhpur alleging industrial pollution in Jojari by about 10,000 industries in and around the town. Following this, the NGT ordered the Central Pollution Control Board and Rajasthan SPCB to conduct a study on increasing sewage and industrial waste in the industrial areas of Jodhpur and submit the details. The inspection report of the case was also submitted on the same day as the NGT judgement.

Judgement: Judgement of the National Green Tribunal regarding pollution caused by industries operating in the Heavy Industrial Area of Jodhpur, Rajasthan, 01/05/2014

Order: Order of the National Green Tribunal regarding waste water/trade effluent being directly discharged into the river Jojri by industries, 01/05/2014