NGT steps in to save Kanha tiger from small-scale mines 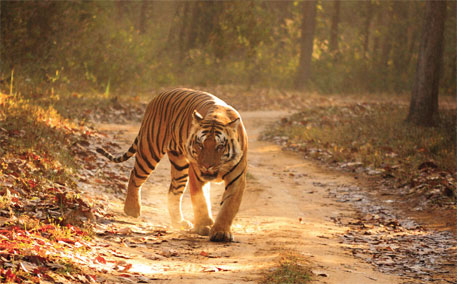 The National Green Tribunal (NGT) has once again raised concerns about the environmental impact of small mines and has stepped in to regulate small scale mining activities in the vicinity of Kanha National Park. The tribunal had earlier expressed concern about the environmental impact of such small mines while deliberating sand mining in the country.

Taking cognisance of dolomite mining in the tiger corridor near Kanha National Park in Madhya Pradesh and its impact on the forest and tiger habitat, the central zonal bench of NGT, Bhopal, in a judgement pronounced last Friday has directed the government to evaluate the need of a cumulative environmental impact assessment (EIA) for small mines that exist in clusters near the park.  Kanha National Park is one of the first nine “protected areas” selected under Project Tiger in the country and is famous for its rich diversity in fauna and flora.

The case was taken up by NGT last April suo motu after a news report appeared in the media about the threats of dolomite mining to tiger habitat in Kanha.  The report indicated that tiger habitat and tiger corridors around the Kanha are being threatened by unabated dolomite mining of in Mandla district of Madhya Pradesh. Many of the mine leases are located very close to the forest boundary—zero metre from the forest limits in some cases.

According to submissions made to NGT in April, 2013, by the Madhya Pradesh Pollution Control Board (MPPCB), the state mining department and the Bhopal regional office of the Union Ministry of Environment and Forests (MoEF), a total of 43 dolomite mine leases (ML) have been sanctioned in Mandla district. Out of the 43, 36 MLs were given “consent to operate” by MPPCB. The assistant mining officer of Mandla informed the tribunal that the lease holders of the remaining mines have not sought any consent so far from MPPCB. However out of the 36 mine leases, 26 mines were operational at that time as they had valid consents. Of the remaining 10, the “consent to operate” had expired and eight mines were closed, though two remained operating illegally. The lease holders of the two mines whose consent has expired have applied for permission to continue mining and their applications are pending with MPPCB since May last year.

A joint inspection team constituted by MPPCB in August further noted that the mines were mostly located in clusters, with majority having mine lease areas below five hectares (ha).

One of the most specific observations of the NGT judgement concerns the cumulative impact of mining in areas that have small mine leases. The bench noted that though most the dolomite mine lease areas are  below five ha, but since they are located in clusters, any mining/human activity in the area will have much larger impact on the surrounding habitat. The tribunal, therefore, directed the government to evaluate whether these mines require cumulative EIA, and if so, they should be evaluated for approval accordingly with respect to guidelines issued by the MoEF at the time of seeking renewal or for fresh consent to operate.

NGT has taken a strong stand about regulating mining activities close to the forest boundary and examining the matter in depth. The judgement noted that “with regard to those mines which are located on the boundary of the notified forest itself, the issue may be examined in detail and action may be taken to revoke their license in accordance with law, if no such provision of granting MLs touching the notified forest boundary exists.”

Disturbance of the tiger habitat in Kanha from mining activities is another serious concern. A report submitted by the Wildlife Institute of India this February in connection with the case before NGT noted that "the mines are located in forested landscape that has tiger occupancy. In this context, the disturbance and habitat loss caused by the mines and its associated infrastructure development would be detrimental for the source value of Kanha.”

Following such observations, the tribunal has noted that the impact of mining activities in areas around the tiger corridor should be taken into consideration by the state pollution control board before granting consent to operate and by the state environment impact assessment authority while reviewing the existing MLs and granting or renewing clearances.

Though provisions of getting a permit from the National Board of Wildlife (NBWL) has not been mentioned in the order, but as per provisions of the Wildlife (Protection) Act (Section 38W), obtaining permission from the NBWL for any activity within a Tiger Reserve, or alteration of its boundary is also required. Therefore, an in depth assessment of mine leases in the area may necessitate such approvals too.

A meeting is now to be convened urgently by the chief secretary to the Madhya Pradesh government to examine matters relating to dolomite mining in Mandla, and take necessary action in a time-bound manner. Officials who are to attend the meeting include officials of the Madhya Pradesh forest department, National Tiger Conservation Authority, officer in charge of MoEF's Bhopal regional office, principal secretaries for environment and mines and minerals department of Madhya Pradesh, chairperson of MPPCB, and the district collector of Mandla.

NGT has expressed dismay that until the matter was taken up suo-motu by the tribunal, concerns and irregularities involving mining in the area were ignored and no record was placed before tribunal to the effect that any major action has been taken against any defaulting mine lease holder.

Though NGT has disposed of the case, but to ensure that the order of the bench is being complied with, the matter will be taken up by the tribunal on July 31.

Judgement of the National Green Tribunal regarding Dolomite mines in Mandla District of Madhya Pradesh and being a threat to Tiger corridor in Kanha, 04/04/2014