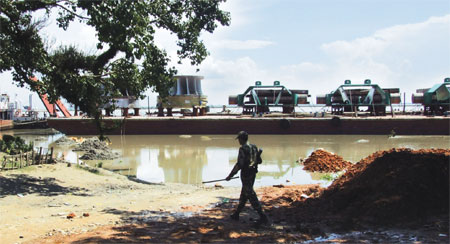 AFTER completing 50 per cent of work, the National Hydroelectric Power Corporation (NHPC) is in a dilemma over its ambitious Subansiri Lower Hydroelectric Power Project. The 2,000 MW project in Assam’s Dhemaji district is the biggest undertaken in the country.

But in the past seven years, at least six expert committees have raised alarm on the dam’s safety and its possible impact on downstream areas. The latest is a technical experts’ committee of the Planning Commission, set up in January 2011 following instructions of the Prime Minister’s Office. The committee, comprising former bureaucrats with the Ministry of Water Resources, C D Thatte and M S Reddy, says the project is not scientifically and technologically viable and calls for a major overhaul in the design.

The Assam government, which had been haggling over its share of electricity from the project, has changed its mind following these reports.

Being power-starved, Assam wanted a larger share of the electricity generated from the dam. It had rejected NHPC’s initial offer of 208 MW with 25 MW of free power, following which, in September 2012, then Union power minister Veerappa Moily offered it 600 MW, including 25 MW of free power. This is more than half of the electricity needs of Assam. However, on March 25, the state’s power minister Pradyut Bordoloi informed the Assembly that the government is yet to sign an MoU with NHPC, considering safety concerns of the dam. The state changed its mind after a group of ministers, constituted to look into the impact of the dam, recommended that the government should follow the Thatte-Reddy committee’s recommendations to ensure safety and stability of the dam. Earlier, a committee comprising Assembly members had also opposed the dam for its flawed design as documented by an experts group from IIT-Guwahati and Gauhati and Dibrugarh universities in Assam.

Protesters led by Krishak Mukti Sangram Samiti (KMSS), a farmers’ group that has been fighting the dam tooth and nail, are now poised to do a U-turn. For the first time, they have agreed to allow the dam if NHPC follows Thatte-Reddy committee’s recommendation (see ‘Recommendations...’).

“I challenge chief minister Tarun Gogoi to verify and check the recommendations of the Thatte-Reddy committee report with the Central government and the Planning Commission,” says Akhil Gogoi, leader of KMSS. “The GoM has said it would accept the report. It is time the Gogoi government shelves the project immediately and implements the recommendation.”

Can NHPC salvage the project?

Construction remains stalled at the project site since May 2012 due to frequent protests and strikes. Some 5,000 contractual workers have abandoned the project. NHPC claims it is incurring losses to the tune of Rs 4-5 crore a day. A Comptroller Auditor General’s (CAG) report tabled in Parliament during the budget session in March states NHPC has incurred an extra expenditure of Rs 24.85 crore on account of payment of idling charges of men and machinery. This is when NHPC is meeting half of the estimated expenditure of Rs 10,667 crore by borrowing from Life Insurance Corporation of India and French export credit insurance company, Coface.

Little wonder that a jittery NHPC is questioning the expertise of the Thatte-Reddy committee. Talking to Down To Earth, NHPC’s independent director Shantikaam Hazarika says, “The committee raises frivolous concerns like dam safety. The concern should have been for impact in the downstream areas.” However, Hazarika admits that NHPC has made a blunder at Subansiri by not caring much about local sensitivities. “There is weakness in the management of this project and cumulative failure on all sides,” he adds.

The company has, meanwhile, engaged in image-building exercises. It has roped in one expert, Nayan Sharma who has retired from IIT-Roorkee, to dispel fears regarding the dam’s safety among downstream village residents. In 2011, Sharma had prepared a report on the dam, at the behest of NHPC, favouring its construction, and said the experts group from IIT-Guwahati and Gauhati and Dibrugarh universities lacked in technical expertise. NHPC had also tried to sponsor stalls for a book fair in Guwahati but it angered the intelligentsia in the region that has been critical of the project. Recently, at a public hearing for a separate hydel project in Dibang Valley of Arunachal Pradesh, NHPC officials reportedly said they will go by the IIT-Roorkee report.

A dam in a hurry

Brahmaputra Board, which manages the river basin, had originally planned the dam at Gerugamukh, close to the present dam site, to tackle recurring floods in Assam. Now, under NHPC, it has changed to a power-generation project. The dam just offers “incidental benefits of flood protection”, says the Thatte-Reddy committee report. Such a change in priority contravenes the Brahmaputra Board Act of 1980, it says.

The committee also raises concerns about flaws in the dam design. The dam is not viable at its present site along the Assam-Arunachal Pradesh border. It is in the foothills of an highly seismic Eastern Himalaya, which has witnessed high-intensity earthquakes in 1897 and 1950. The report agrees with the findings of the experts group from IIT-Guwahati and Gauhati and Dibrugarh universities, which says the revised value of peak ground acceleration—0.50g—would have prepared the dam to withstand moderate or strong earthquakes. The IIT-Roorkee report had, however, agreed with the dam’s existing design, with a peak ground acceleration of 0.38g, which is sufficient to withstand low-intensity earthquakes.

To compound the situation, the dam rests on a weak foundation. The Thatte-Reddy committee says the dam site is on the youngest of the Himalayan rock formation, called Shivalik sandstone, which behaves like a sand rock and is considered very weak for foundation. Biswajit Das, executive director of Soma Enterprises, one of the contractors for the dam construction, says rocks found in the area have a poor strength of 12 to 20 MegaPascal (MPa) in dry condition and 4 MPa in the presence of moisture. Anything between 12.5 MPa to 50 MPa could be broken by light hammer blows, while a stone less than 4 MPa could be broken by applying hand pressure.

“Its adequacy and competence to support the concrete gravity dam is not established satisfactory,” it states. Despite NHPC’s efforts to innovate with the design and foundation of the dam, almost all the experts have said that the dam rests on a weak foundation, the committee. It casts doubt over the selection of the site. It says there is nothing on record either in NHPC or elsewhere to demonstrate when, how and who took the decision on the type of dam and foundation treatment. The CAG report also points out the flaw. NHPC awarded works to contractors even before receiving the statutory clearance from the Ministry of Environment and Forests in 2008 and did not survey and investigate the dam site properly before starting construction.

The Thatte-Reddy committee’s findings show that NHPC did not have an independent dam design review panel (DDRP), which is a must for all big dam projects. “NHPC need not have sidestepped this simple prerequisite of forming a DDRP, which could perhaps have obviated the present impasse to a great extent,” states the report. On January 22, in a press release NHPC claimed to have set up an independent DDRP, but officials are not disclosing who the panel’s members are.

J N Khataniar of the Guwahati chapter of Indian Society of Earthquake Technology says it is the first dam in the world where a dam design review panel will propose design changes after 50 per cent of the construction has been done. Such massive changes at this stage of construction will only worsen the situation, making the dam more unsafe.