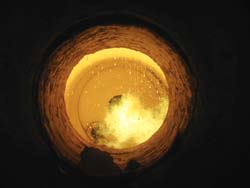 nine states in the us, along with several environmental groups, have sued the United States Environmental Protection Agency (epa) for adopting a rule that refuses to regulate mercury and other pollutants from cement plants.

The petition, signed by Connecticut, Delaware, Illinois, Maryland, Massachusetts, Michigan, New Jersey, Pennsylvania and New York was filed on February 16 in the us Court of Appeals for the District of Columbia Circuit. Environmental groups like Sierra Club, Downwinders at Risk, Desert Citizens against Pollution, and Montanans against Toxic Burning, supported the lawsuit.

Cement plants are the primary source of mercury emissions in the us. The agency estimates that more than 100 cement plants emit over 4,989 kg of mercury each year.In December 2006, epa announced new limits but allowed relaxation to the plants that were built before December 2005.

These plants got a relaxation on grounds of expensive modernisation. But "the Clean Air Act requires epa to limit mercury from all cement plants, not just the new ones", said James Pew, a lawyer from Earthjustice representing the plaintiffs.