Rising levels of nitrogen in soils are increasing global warming 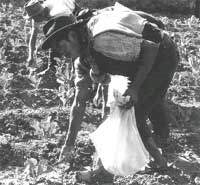 increase in the use of fertilisers and cultivation of crops that 'fix' atmospheric nitrogen is leading to loss of soil nutrients, rising atmospheric concentrations of the greenhouse gas nitrous oxide, and increasing acidification of lakes and rivers. Peter M Vitousek and eight ecologists from the Stanford University, California, say that the amount of atmospheric nitrogen that is fixed on the land has doubled over the past century. The ecologists are coming out with a publication titled Ecological Applications that deals with the consequences of this nitrogen glut ( Scientific American , Vol 276, No 6).

The natural cycling of nitrogen, involving its conversion from the air to combined states in organisms and the soil and vice versa, has been alarmingly disrupted, say the scientists. This explains the decline in species in some habitats, they claim.The decrease in marine fish catches and the steep rise in algae in many coastal areas is also related to this, according to them.

According to Vitousek, using fertilisers more efficiently is the most plausible method of reducing the nitrogen glut. The demand for industrially produced fertilisers can be reduced by farmers using recove-red municipal food and yard waste - rich sources of nitrogen, says Gary T Gardener from the Worldwatch Institute, usa. Manufacturers' organisations claim that the industry is already ways of getting more growth from less fertiliser. Although use of nitrogen fertiliser has declined from the peak figures in 1988, it is rising again. With an ever-growing population to feed, the situation would only get worse, says Vitousek.