Niyamgiri, in bits and pieces

As Odisha government confines the claims of Dongria Kondh to small patches of forests around their hamlets, the second palli sabha at Kesarpadi village may reject skewed settlement of habitat rights carried out in a hurry 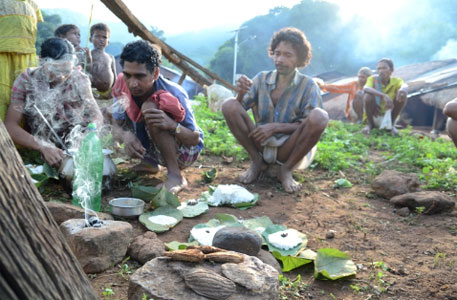 Suku Kutruka is perplexed that the government can limit a perennial stream running kilometres across forested hills to a mere 0.5 acre (one acre equals 0.4 hectare). He is also angry that the state government duped him into signing the document that limits his community’s rights to the streams, forests and places of worship.

Kesarpadi is one of the 12 villages selected by the state government of Odisha to conduct palli sabha or village council meetings pursuant to the Supreme Court order on April 18 this year. The apex court empowered the forest dwellers to decide if bauxite mining within their habitat will infringe on their cultural and religious rights. The first palli sabha at Serkapadi on July 18 unanimously rejected the mining proposal on any portion of the Niyamgiri hill range.

Two weeks ago, on the morning of July 6, a host of officials—revenue inspectors, foresters and welfare extension officers—visited Kesarpadi village on the forested hills of Niyamgiri range in Rayagada district. The forest dwellers were asked about their cultivation plots, water sources, places of worship, grazing land and cremation ground that are scattered around the village or stretches faraway into the hills. The state government was in a hurry to settle community claims under the Forest Rights Act, 2006, before the date of palli sabha, where the verification report was to be placed.

The state government verification report claims the community forest rights of Kesarpadi villagers were settled on that day. It also claims villagers were explained “lucidly” in their local Kui language, that places were demarcated and that none of the villagers present made any further demands on the forests. Crucially, the report claimed to settle religious and cultural rights of the village, based on local deities, within a mere 0.11 acres (see PDF copy of joint verification report). 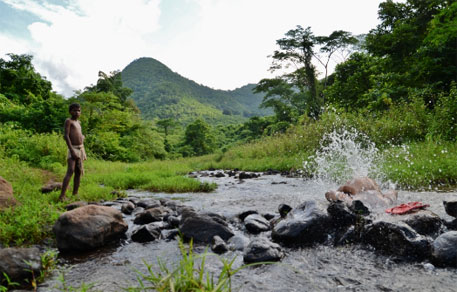 The report ignores the forest dwellers’ broader claims on the Niyamgiri forests. The Dongria Kondh and other tribal and non-tribal forest dwellers worship the entire Niyamgiri ranges as their source of sustenance. Over 100 perennial streams originate from the tropical forest hills which is also the source of nearly 273 varieties of uncultivated wild food. Alongside, the Dongria Kondh grow an enviable mix of local millets, pulses and legumes on the Dongar, shift and burn cultivation plots on hill slopes.

Suku Kutruka, president of the village forest rights committee, denies the government’s assertion. “We were only asked to show the streams and forests we depend on. They told we are giving you everything you asked for. So I signed the report.” Sitting at the entrance to his village, under the shade of a large jackfruit tree he recounts that none of the officials physically went to measure the plots. “Because we cannot read Oriya we were fooled again,” he laments.

The verification report is funny in parts. It has settled even the rights of wild animals like leopards and bears living around Kesarpadi. It allocates, for instance, 15.16 acre for wild cats (Baga gumpha) and a generous 23.9 acre for bears (Bhalu gumpha). It is a tradition among the Dongria Kondh to designate hills around their settlements for wild animals who they believe have an equal right over the habitat.

The report completely misses the significance of Niyamraja for the Dongria Kondh who consider him to be their ancestral kin and the keeper and protector of the forest hills. His territory spreads across and beyond the proposed bauxite mining site of Niyam Dongar. He is also the Dongria’s prime communicator with other forces of nature, the sun, the earth and the water.

What now? I ask Kutruka. “At the palli sabha on Monday we will reject the verification report. Our community rights extend over all the forested hills of Niyamgiri that we worship as the abode of Niyamraja. How can they limit us to small plots?” he asks while pausing between sentences. 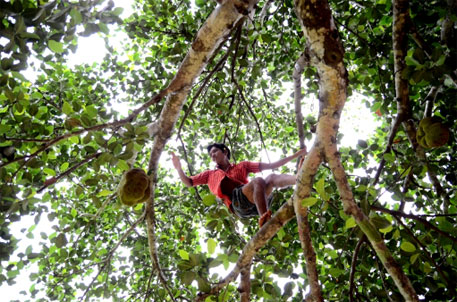 After we finish talking, I share with Kutruka a packet of imported dates picked up on to the way to his village from the nearest market and railway station at Muniguda. I offer it to a motley crowd of kids and an old lady standing nearby. “We will plant the seeds here,” smiles Kutruka, brushing off his worries over the verification report. It was touching to see them neatly gather the seeds as I threw mine into a bush.

The previous evening I watched intently as the Jani, village priest of Kesarpadi Adu Kutruka worshipped Amba Tanku, mango kernels, with generous offerings of rice, dried meat and Mouli, a local wine. The end of the mango season marks the beginning of eating the kernel made into gruel. Seeds have a special significance in the lives of these forest people—before they prepare the Dongar plots for cultivation, the entire village gathers for the ‘bihan parab’ or the seed festival. Little inside the Niyamgiris is owned as personal property: the seeds, fruits trees, wild roots, tubers and the entire forests are owned by the community. The rights of the community extending over the dense swathes of Niyamgiri is essentially fluid, a reality sorely missed by the state.

On July 18 this clash of world views played out starkly in Serkapadi village—the venue of the first palli sabha meeting. The event had no parallels in India’s history. The judiciary had come down to the doorstep of the Dongria Kondh to record their decision on proposed mining by Orissa Mining Corporation Limited and Sterlite, a subsidiary of mining and metals giant Vedanta. The national and local media were present in large numbers: cameras intruded at will for a sneak-peek at the otherwise shy and reclusive Dongria Kondh. The Central paramilitary and state police’s special operation group combed and guarded the small hamlet from all sides.

District judge of Rayagada, Sarat Chandra Misra, was visibly agitated. Ever since the meeting started at 11 am, the forest people raised a series of objections. “We don’t want the meeting to be chaired by an outsider. You have to conduct the proceedings in our language, Kui. Here is a list of our demands, please have someone read it out.”

Misra tried to pacify them by saying the proceedings will be impartial and that he has been specially appointed by the Supreme Court of India to oversee that decisions are made in a fair and impartial manner. One by one, the 36 villagers took to the mike and said they cannot give away any portion of the forest hills to the company or the government. Between breastfeeding toddlers, Dongria Kondh women, huddled together, ears towards the mike. Tribal forest dwellers from far away hamlets—women carrying long sticks and men with shining axes perched on their shoulders—walked three to five hours to reach the venue and sat in solidarity outside. 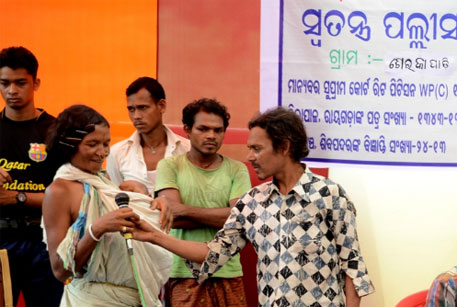 Hell broke loose when the verification report on the community forest claims and rights to worship were read out. The forest dwellers led by the forest rights committee president Indra Sikaka told Misra he was duped into signing the verification report and that it be rejected. “All the forests and hills belong to us. We do not agree with the bit and pieces given to us.”
It is at this point that district judge Misra sidestepped his role as the Supreme Court appointed observer, tried to convince the Dongria Kondh and even threatened to call off the meeting. “Are you ready to relinquish your community claims? How can you claim all the hills of the Niyamgiri ranges? How is that possible?” asked an animated Misra while vigorously nodding his head.

The heated debate brewed even as a young state police recruit spoke to the Dongri Kondh metres away. He could speak Kui and heartily chatted with the young tribals. Misra after a point threatened to call off the meeting and made a costly faux pas he might be regretting now, “all of you are acting very smart despite being illiterate. You would have sold the country were you educated”.

The words were lost on the tribals but drew angry reactions from the media. “There is a gap in communication but you cannot call them murkhya (stupid),” snapped an agitated correspondent from Delhi. 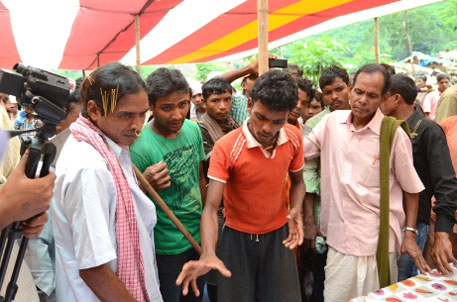 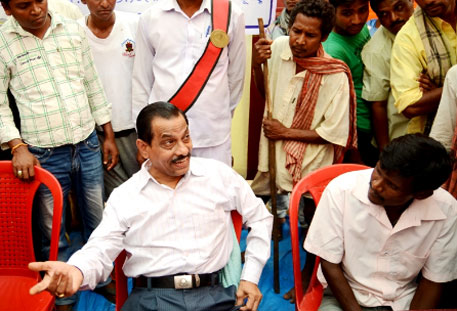 The Serkapadi villagers signed the minutes of the meeting only after a paragraph was inserted at the end, asserting their their religious, cultural and community rights over the entire Niyamgiri hills. A loud cheer followed as the final words were read out. Perhaps a little worried, Misra travelled the narrow forest path from Serkapadi village to the nearest town of Muniguda, 17 kilometres away, after putting on a bullet proof jacket.

“The strong presence of the tribal community weighed heavily on the security forces. The state government’s strategy to intimidate people was effectively neutralized,” Bhala Chandra Sadangi, a leader of the CPI-ML and an advisor to the Niyamgiri Suraksha Samiti, told me soon after. 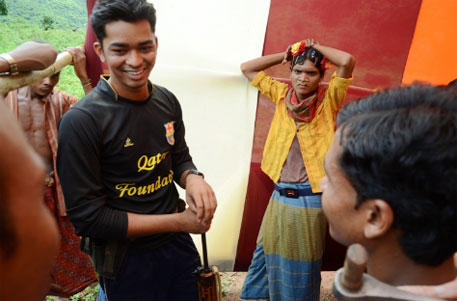 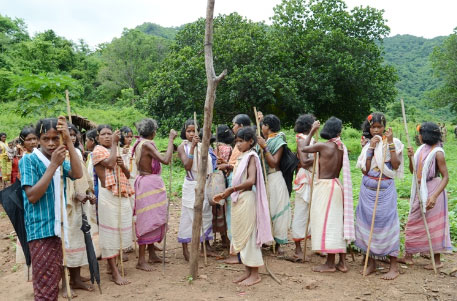 “The district judge tried to barter the religious rights of the Dongria Kondh. He asked them to give up their claims on the entire Niyamgiri hills and instead settle for local deities inside the village,” remarked Ramesh Gopalakrishnan, a researcher from Amnesty International who was present at the venue.

Despite the apparent victory, next time round, the tribals want to make their case fool proof. On Monday, July 22, residents of Kesarpadi have decided, they will reject the community claim verification report. How this will play out on stage remains to be seen.

On a lighter vein, no one know as to how the district judge will navigate the difficult forest path to reach remote tribal hamlets like Lakhpadar, Lamba and Khambesi, scheduled to hold palli sabhas in the beginning of August. It takes between three-four hours of strenuous climbing uphill or gliding downhill inside the dense forests to reach these hamlets from where the motorable road ends. A friend I made here quips, “maybe a helicopter” while I argue “a pilgrimage doli sounds more plausible”.