No breather in sight 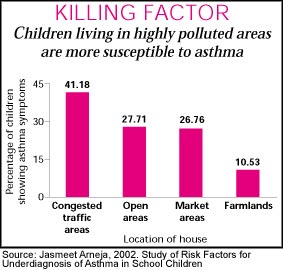 A study of 900 adolescents living in Delhi and surrounding areas such as Sohna and Rewari in Haryana has once reinforced that exposure to air pollution is one of the main perpetrators of asthma. According to the study conducted by researchers from Sir Ganga Ram Hospital, New Delhi, children residing near congested traffic areas or market places are more likely to suffer from the disease, than those living in smaller towns. Same is applicable for those regularly commuting long distances.

The study data was collected through a detailed questionnaire, which pertained to environmental and social risk factors. Children exhibiting symptoms such as cough and shortness of breath were diagnosed as having asthma.

Along with air pollution, the group also identified other risk factors such as cigarette smoking. After scrutinising their data, the researchers found that the risk was lower in children living in cleaner environment and those who did not travel long distances.

"The magnitude of problem makes it vital that the disease is diagnosed in early stages so that proper treatment can be given at the right time," concludes Anupam Sachdeva, who was part of the study.