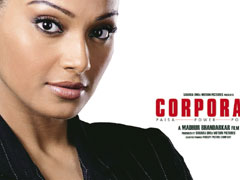 Madhur Bhandarkar has acquired the reputation of being a film director who highlights current issues without the crassness often associated with mainstream Bollywood. After Chandni Bar, his latest venture Corporate is ostensibly aimed at exposing the underbelly of India's filthy rich -- in particular those living in Mumbai, the country's commercial capital. Inevitably, Corporate underlines the infamous nexus between big business and politics. Of special interest to most readers of Down To Earth, much of the film revolves around how the promoter-politicians caucus hushes up investigations when pesticides are found in soft drinks manufactured by a formerly government-owned firm that has been privatised.

The Centre for Science and Environment may rest assured that none of the characters in Corporate have any resemblance to any person dead or alive and that any resemblance is not just coincidental but merely a consequence of Bhandarkar not finding any other example exemplifying corporate greed from India's contemporary history. The film is crowded with characters who epitomise all that is amoral in the world's largest democracy.

Given the minor concessions that Bhandarkar makes to crude commercialisation in Corporate -- including a single song in the soundtrack and an item number -- it's hardly surprising that the only good guys in the movie are a few minor players who represent the petty bourgeoisie, or at least seek to: clerks, peons and security guards who pass snide remarks about their well-heeled employers. The rest of the characters are black, with little or no trace of grey.

The two principal characters, Nishi (Bipasha Basu) and Ritesh (Kay Kay Menon), exemplify the lesser evil. Nishi has no qualms about pimping, bribing or stealing trade secrets in obeisance to Goddess Lakshmi even if she stops short of sleeping with the competition. Menon tries harder to depict the poor, little, rich brat in love with Nishi.

The film's bare plot has been lifted from newspaper clippings. The cast includes two business rivals (played by Rajat Kapoor and Raj Babbar). There is also a politician without an iota of conscience, a greedy representative of a multinational corporation, an upwardly mobile media madame, a guru with his clientele of capitalist chelas, an effeminate film director, a sleazy secretary who passes confidential documents for a consideration and a non-government organisation whose members are available for a price -- much like the model and the dancer are to satisfy the lust of the powerful and the influential. Bhandarkar's depiction of politicians would clearly appeal to the middle class that loves to hate all politicians and holds them responsible for all that is wrong with the country.

The stereotyping is unrepentantly evil. Forces of goodness and honesty are conspicuous by their absence. The stray depictions of the middle class also end up being caricatures. For example, Bhandarkar lampoons the insurance agent who calculates what the price of a plate of paneer could fetch when his daughter decides to splurge on her parents in a five-star hotel after she receives her first salary as junior executive.

The reactions of Mumbai's glitterati to Corporate have been rather predictable and almost as stereotypical as many of its characters. Two examples would suffice. Columnist Shobhaa De says: "Madhur's film is laughable and ludicrous. It is a strenuous attempt to project a world that Madhur does not belong to, nor understand. He has made an utter fool of himself...I found myself laughing at what must have been dramatic moments in his head...No one behaves this way in real life" (Asian Age, July 14).

Advertising honcho Piyush Pandey adds: "Reality cuts both ways. There are clean corporates as well as the dirty guys. But a generalised perspective that's presented to the public in Corporate shows that it's a very ignorant way of looking at things. If the filmmaker showed the picture that way, it's because he wants to see it that way...Hard work and honesty always pay."

Unlike socialites, socialists would probably be far more approving of Corporate. The auditorium in which I watched the film was full. Despite the contemporary contextualising, Corporate is far less subtle in depicting the amorality of the Indian upper class than, say, a film like Shyam Benegal's Kalyug. Be that as it may, its narrative is gripping. Above all, Corporate is intensely class-conscious.