No mining by PSUs for trade in Scheduled Areas: tribal affairs minister 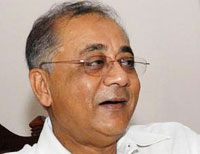 The Union minister for tribal affairs and panchayati raj, V Kishore Chandra Deo, says he does not want public sector companies (PSUs) to undertake mineral exploration in Scheduled Areas or tribal-dominated areas as listed in the Fifth Schedule of the Constitution. These areas enjoy special powers and privileges. In an interview to Down To Earth (DTE), Deo pointed out that the Constitution does not allow private companies to mine in Scheduled Areas. But mining by PSUs for trade purposes also violates the Constitutional provision in 'spirit', he says.

“Minerals are our national wealth. Even PSUs should undertake mining only for their own consumption. There should be no mineral lifting for outright trade. And when I say PSUs, I mean state enterprises that require minerals for their own production and not the companies that trade in minerals,” he says.

Deo spoke to DTE on a wide range of contentious issues relating to the tribal areas of the country, plagued by Naxalite violence. He disclosed that by the end of October, or even before that, he would bring out a 'package' that would streamline the implementation of key legislations, like the Forest Rights Act (FRA) and Panchayats (Extension to the Scheduled Areas) Act (PESA). Terming the forest department as the worst enemy of FRA, he says the department must now 'realise' that tribal development is a 'serious' national issue, attracting the right political attention. Going by sources in the ministry, the Prime Minister called Deo last month and mandated him to take measures to revitalise FRA and PESA.

Implementation of PESA has been afflicted by non-issuance of guidelines at the level of individual states for the past 15 years. Saying this as a Constitutional violation, Deo warned a legislation would be brought into effect to ensure states comply with the provisions of PESA. The legislation, enacted in 1996, gives rights to own and manage the forest resources to the village in the Scheduled Areas of the country. But the Act has not been implemented in several states as they have not even formulated the rules required to implement it. “That is a violation of the Constitution. I am taking up the issues with States, and if I feel it is necessary to go for a further legislation to ensure states compliance with the provisions of PESA, I will have to do that,” says Deo.

On FRA, he assured changes that will make it effective. FRA recognises the rights of the forest dwellers over forest resources they have been traditionally using; the Act's implementation is beset by many problems. The minister is now working on the changes required to be made in the rules of the Act to make sure it is properly implemented. He said the changes will be presented before the Cabinet within a month. “If the changes in the rules will not solve the purpose, we can also go for an amendment in the Act when Parliament is in session,” the minister says. He said joint forest management (JFM) is a violation of FRA where it is applicable. “Giving FRA recognition to areas under JFM is a scandal. It must stop,” he says.