No shortcuts to biosafety, says India 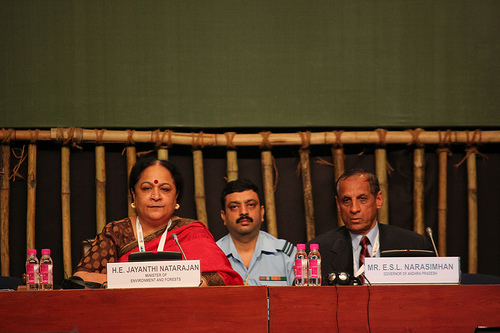 The 11th United Nations Convention on Biological Diversity (CBD) began on October 1 at the International Convention Centre in Hyderabad. In the inaugural function, India expressed the view that there were no shortcuts to biosafety. “Since investments in biotechnology is rapidly increasing, a science-based mechanism is needed to assess the impact of such technologies on biodiversity and the environment,” said Jayanthi Natarajan, India’s minister for environment and forests. There should be long-term risk assessment and risk management, she said.

She was addressing the inaugural function of the conference. The first part of the CBD is the sixth meeting of the parties to the Cartagena Protocol on Biosafety (CoP 11-MoP 6). The Cartagena Protocol is an international agreement which aims at ensuring the safe handling, transport and use of living modified organisms (LMOs), resulting from modern biotechnology, that may have adverse effects on biological diversity and human health. LMOs broadly refer to genetically modified agriculture crops.

The Cartagena Protocol was adopted on January 29, 2000 and entered into force on September 11, 2003. A supplementary protocol, the Nagoya-Kualalumpur Protocol on Liability and Redress, was adopted in 2010 in Nagoya, Japan, as part of CBD CoP 10.

“The five-day MoP 6 conference will have deliberations and decisions  for implementing the Strategic Plan adopted in Nagoya regarding biosafety,” said  Braulio Ferriera de Souza Dias, executive secretary of CBD. He also expressed his views that all countries, which have not signed the Cartagena Protocol would eventually become members to this agreement.

The Nagoya Supplementary Protocol deals with liability for damage that can arise from LMOs and Genetically Modified Organisms (GMOs), and most of the Cartagena parties, including India, have not ratified the Nagoya Protocol on biosafety. Out of the 164 countries that signed the Cartagena Protocol, only 50 have signed the supplementary protocol. And just three countries have ratified the Nagoya Protocol.

Though Natarajan reiterated India’s commitment to ensuring biosafety and addressing the socio-economic issues arising from modern technologies, she was silent on the ratification of the liability protocol. “It is not easy to strike a balance between new technologies and biosafety,” said the minister in the conference. She said the government is thinking of formulating legislation for biosafety.

About 2,000 delegates from more than 150 countries, including heads of governments and policy makers, are participating in the biosafety conference. MoP 6 will conclude on October 5. The main part of the CBD, the Conference of Parties 11 (CoP 11) will be held between October 8 and 19. The discussions in this segment will review the progress in implementing the decisions taken in the previous CBDs and measures for taking forward the implementation. The focus will be conservation and sustainable use of biodiversity, and access and benefit-sharing. Another main topic is raising financial resources for implementing the CBD decisions.

A high-level meeting to adopt decisions will be held between October 8 and 19.