No state support to Zimbabwe's A2 farmers 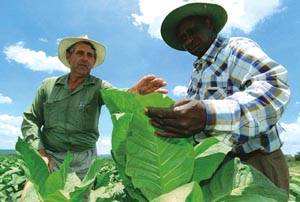 Harare has announced it will discontinue support to new black commercial farmers when the next summer season commences. The decision comes in the face of an economic meltdown.

According to a statement issued by Reserve Bank of Zimbabwe governor Gideon Gono, the decision came after the government discovered a significant number of new commercial farmers (also known as a2 farmers) have developed a "dependency syndrome", expecting the government to provide inputs all the time. The move means that the impending winter season will be the last time these farmers will directly benefit from government programmes.

a2 farmers are the previously landless majority of the country, who were leased out farms for 99 years during the government's fast-track land reform programme in 2000, after the government acquired around 4,000 commercial farms owned by white farmers. The government has since been providing subsidised inputs and loans. "Despite western vilification, the effort was to sustain the country's economy through agrarian reform. The dependency syndrome has, however, ruined most a2 farmers. They feel the loans given to them are government funds and should, therefore, not be paid back, while some even divert the inputs to the black market for short-term gains at the expense of the nation," Gono added.

After seven years of support, the government feels a2 farmers should have acquired the requisite knowledge, skill and experience to finance their own operations. They should use the allocated land profitably instead of straining dwindling government resources. The government has also threatened to withdraw land allocated to "lazy farmers".

The immediate provocation for the move is a massive dose of inflation, with the cost of living for a family of six surging to us$686,000 in February, up from us $458,986 in January.

The government now aims to concentrate on assisting small-scale and communal farmers.