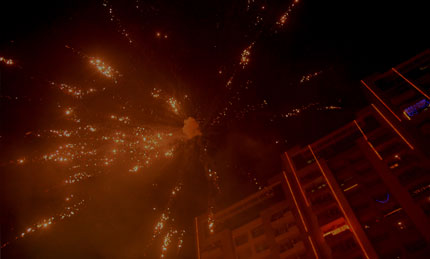 The National Green Tribunal (NGT) in a recent order has directed the Union Ministry of Environment and Forests (MoEF) and the Central Pollution Control Board (CPCB) to conduct a national-level study on noise during manufacture and bursting of firecrackers by next February.

The order is in response to a bunch of petitions from firecracker manufacturers, traders and buyers in West Bengal, which challenge the state pollution control board’s notification of 1997. The notification permits only 90dB sound at a distance of 5m from the point of bursting a cracker.

This is a more stringent noise standard than the one prescribed in MoEF’s notification dated October 5, 1999, which permits 125dB sound at distance of 4m. The tribunal has ordered that the MoEF notification will hold good till a fresh study is conducted.

This relaxation by NGT legalises 100-odd varieties of firecrackers, like chocolate bombs, kalipatkas, dhanipatkas, chain crackers, seven shots, rocket bombs and dodomas that were previously in the banned category.

In October 1996, the Calcutta High Court had banned the sale or manufacture of firecrackers which generate more than 65dB noise (at a distance of 5m) in the state. After the court order, the state’s pollution control board started rigorous monitoring of noise levels during festival seasons (see ‘Durga’s decibels’). On further request petitions, the high court modified its order in June 1997 and permitted manufacturing of firecrackers which generate more than 65dB of sound but were meant for sale outside West Bengal. The court also clarified that in case of violation of the order, police could confiscate fireworks and the raw material used in their manufacture.

However, dealers’ association of fireworks in the state filed an appeal against this order the same year and the high court relaxed the noise limits to 90dB sound (at 5m from the point of bursting a cracker). The state pollution control board, too, issued the same limit in a notification the same year. A 90-100dB sound for more than a minute can break a wine glass.

While relaxing the noise limit, the court had suggested a national committee on noise pollution control to decide on noise pollution limit. The committee so constituted recommended a maximum noise level of 125dB at 4 m from the point of bursting a cracker (see ‘Loud campaign’). The recommendations of the committee were ultimately approved and MoEF passed a notification on October 5, 1999.

The state pollution control board argued before the tribunal that there has been an increase in population, urbanization, industrialization, traffic density and health problems of the public in the area and stringent laws are necessary. The board also said that the Constitution permits the state to frame regulations to protect its residents. The manufacturers, on the other hand, said that there is no scientific basis supporting the 90dB limit.

Experts, however, say that 125dB is quite loud. “Exposure to 125 db sound for a long duration, say more than an hour or two, might lead to permanent hearing impairment,” says Shweta Gogoi, ENT specialist at Ganga Ram Hospital in Delhi.

With Diwali and Durga Puja round the corner, the fire workers’ associations in the state are happy with the order. “This order gives us some justice. The rest of the country enjoys a linient norms; we don’t understand why this injustice to West Bengal manufactures alone. However, we are not sure if this happiness would continue because the state is planning an appeal at the Supreme Court,” says S K Dutta, executive member of the Burrabazar Fireworks Association, a petitioner before NGT.

West Bengal Chief Minister Mamata Banerjee wants to challenge the NGT order. “The matter to challenge the order is still under consideration; a decision will be made by next week,” says Binay K Dutta, chairperson of West Bengal Pollution Control Board.