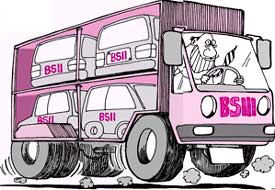 Effective April 1, 2005, eleven Indian cities adopted Bharat Stage III (bs-iii) norms for vehicular emissions. But you can still register a vehicle that meets the outdated bs-ii norms. Only it should have been manufactured before April 1, 2005. The bs-iii notification clearly points out vehicles manufactured on and from April 1 and not vehicles registered from April 1, 2005. A Delhi transport department official says, "Ideally the cut-off date should have been for registration and not manufacture. Manufacturers will clearly use this for some more time, before registering only bs-iiicars."

Manufacturers are exploiting this loophole to sell bs-ii cars in the eleven Indian cities. "No manufacturer will have stocks to last that long. Pure economic sense dictates that the bs-ii stock would be exhausted in just a couple of weeks," counters a spokesperson of the largest automobile firm.

Euro iii norms are called bs-iii in India. Maruti's spokesperson says, "The difference between bs-iii and Euro iii is the maximum speed at which the vehicle is tested; it is limited to 90kmph for bs-iii and 120kmph for Euro iii. The emission limits are the same." For petrol cars, oxides of nitrogen (nox) and hydrocarbon (hc) have been regulated, and nox has been regulated in diesel. While four-wheelers have moved from bs-ii to bs-iii, two- and three-wheelers moved from bs-i to the bs-ii (see box).

Most automakers have made no major technological change to follow diesel bs-iii. This is evident from the automobile industry's responses. "While for petrol vehicles, it was always an easy option, it wasn't easy for diesel vehicles. Hence you might see some changes in diesel vehicles, but as far as petrol is concerned rest assured, it is the just the change in the catalyst loading which will do the trick", remarks a leading automobile vendor. In a majority of the cases, manufacturers have tinkered with the emission control devices to adhere to the new norms.

The Maruti spokesperson explains: "There have been some major improvements at parts level like the O2 sensors, which not only are heated type but are specially designed for super fast light off. The exhaust system has been redesigned with the introduction of close coupled catalyzers, commonly called Maniverters." Similarly it is learnt that in Hyundai Santro, one of the largest selling models, the catalyst loading has been changed and so has the ecu. Similarly Tata Motors have also optimised the system and change in the catalytic converter loading resulted in meeting the required norms.

"As company policy, we do not talk on r&d issues. You would appreciate that we are a private company and hence reserve the right of not sharing the information," says the corporate communication head of Fiat India, Marius D'Lima, when asked about the technological changes they have carried out on various diesel models.

The Tata Motors spokesperson said, "Indica diesel bs-ii has a mechanical system, and we have introduced electronic fuel injection system in our Indica bs-iii." Automobile experts opine that by merely moving from a mechanical system to an electronic system would help automakers meet the bs-iii norms in most cases. A change in the catalyst loading would do the needful after that.

The right step, technologically, would have been to move to direct injection (di), from indirect injection (idi) for the diesel passenger cars. But interestingly most of the vehicles are meeting the bs-iii norms with idi. In idi fuel is injected into a pre-chamber where ignition occurs and combustion then spreads to the main combustion chamber, while in di the fuel is sprayed directly into and ignited in the combustion chamber. Historically, idi diesel engines have exhibited lower emission levels than the di engines. With the recent developments, however, this is no longer a case. Automakers accept they would be moving to di engines for bs-iv and also for bs-iii subsequently, but not now.


What's more interesting however is the fact that the bs-iii norms clearly ignored the onboard diagnostic (obd) system. The directive that brought in Euro iii norms in European countries also requires that "vehicles of Category m1 and n1 equipped with positive-ignition engines must be fitted with an obd system for emission control." It is believed that none of the models being sold now have obd. Tata Motors explains, "For export, our Euro iii models are equipped with the obd. For domestic there is no requirement as per norms."

Indian manufacturers are unanimous on obd. As there is no regulation, there isn't a need for it. Maruti, for instance, says, "It isn't enough that just the vehicle be equipped with obd . There are issues related to servicing habits of users, fuel specifications and adulteration and general lack of infrastructure, which does not make it feasible to have an obd system on our vehicles."


While four-wheelers moved to bs-iii, two-wheelers moved to bs-ii . As India is one of the world's largest two-wheeler markets, major technological changes were anticipated. Technological competition was expected to play a major role, given that Honda and Yamaha were are now present in India. Thus, while Bajaj Auto was pitted against the Honda subsidiary in India, the Honda Motorcycles and Scooters India limited, for the scooters market, Hero Honda and tvs Motors were pitted against the subsidiary of Yamaha Corporation.

Specifically to address the emission compliance to the bs-ii norms, as far as the four-stroke two-wheelers are concerned, employment of secondary air injection, catalytic converter or hot tube (either alone or in combination) has been relied upon. It is reliably learnt that Hero Honda has used a similar strategy. Yamaha, Bajaj are no different either.


A senior official from the industry says, "Yamaha has totally stopped the production of two-stroke engines. It is difficult to meet bs-ii with two-stroke technology. Various manufacturers, though, would still be producing the two-stroke engines. But we thought it would be prudent to continue with the four-stroke." Another first in India, perhaps, would be a fuel injection two-wheeler. It is learnt that Yamaha is the only manufacturer close to introducing a fuel injection bike (in their Frazer model).